The Matildas have completed a clean-sweep of their friendly series against China after a gritty 2-1 win at Pirtek Stadium on Wednesday night. 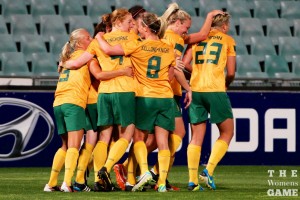 The Matildas have completed a clean-sweep of their friendly series against China after a gritty 2-1 win at Pirtek Stadium on Wednesday night.

Australia looked in complete control on home soil as a goal in either half to Lisa De Vanna and Emily van Egmond had Hesterine De Reus' troops 2-0 up inside the hour mark.

China threatened a comeback late on, with substitute Ying Li scoring from the penalty spot 17 minutes from time to set up a tense finish in Parramatta.

But that was as close as the visitors would get with the Matildas holding on for a well-deserved victory just four days after their 2-0 success over China in Wollongong.

While it was far from a polished performance from the Australians, there were plenty of positive signs with goalkeeper Lydia Williams hardly tested behind a well-organised defence.

Striker Michelle Heyman was also a handful in attack playing a vital role in both of the Matildas goals.

Eager to make amends from their defeat on Sunday, China started with more intent but it was the Matildas who manufactured the first chance on 14 minutes.

Tameka Butt won a free-kick just inside China's half and quickly released van Egmond down the right.

The classy midfielder played in a dangerous cross to the near post where Heyman was waiting but she couldn't direct her header on goal.

The home side were struggling to get recently-crowned Australian Female Footballer of the Year De Vanna into the game, with the Chinese defence quick to close down the fleet-footed striker whenever she got possession.

But De Vanna made a telling contribution on the half hour from the Matildas' first corner of the night.

It was the 29-year-old's 31st goal for her in 82 international appearances for Australia and gave the hosts a deserved lead at the break.

China's best chance came just three minutes into the second half when Li was left all alone in the middle but the striker headed narrowly wide of Williams' goal.

And just nine minutes later the Matildas doubled their lead.

Heyman worked some space on the edge of the box and her shot-come-cross rolled perfectly into the path of van Egmond who clinically side-footed home at the far post.

The visitors gave themselves hope when Li coolly slotted home a penalty after Clare Polkinghorne was adjudged to have handled in the area.

But there would be no late comeback with the Matildas comfortably seeing out the result, giving themselves some confidence as they build towards defending their title at next May's AFC Women's Asian Cup tournament.