Westfield Matildas head coach Tom Sermanni will bring in 27 players for a training camp at the Australian Institute of Sport in Canberra in preparation for the team’s USA trip in September.

Westfield Matildas head coach Tom Sermanni will bring in 27 players for a training camp at the Australian Institute of Sport in Canberra in preparation for the team’s USA trip in September.

Elise Kellond-Knight back in action | Getty

Emily van Egmond, Collette McCallum and Michelle Heyman all return to the squad following spending the past months playing overseas, while Sermanni has also called up Canberra twins Ashleigh and Nicole Sykes to the senior squad.

“Having three games prior to the Westfield W-League starting again is a good indicator of where we’re at as a squad and where we’ll look to improve,” Sermanni said.

“We’re very much in a transitional period at present and testing ourselves against the US, who are returning home after winning Olympic gold, is going to be a massive.

“Playing Haiti gives us a chance to settle and allow players to get some rhythm prior to taking on the US which will help calm a few nerves.”

“We’re again going with an experimental squad, with some new young players coming into camp and some players returning from injury also in the frame,” Sermanni concluded.

The Westfield Matildas will play the United States Women’s National Team on September 16 in California at the Home Depot Center, and will play a recently confirmed second match against the Olympic champions on September 19 at Dick's Sporting Goods Park in Commerce City, Colorado.

Ranked 58th in the world, Haiti should give the Westfield Matildas (recently moving up one spot to 9th place on the FIFA rankings) a testing hit out prior to their first of two matches against the World No.1-ranked side at the Home Depot Center.

The Westfield Matildas go into camp on Wednesday, 29 August, to commence their final preparation before departing for the USA on September 10. 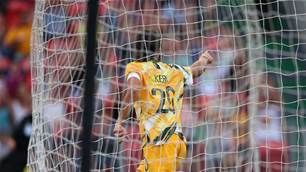