Having spent close to a week acclimatising to the hot and steamy conditions in Ho Chi Minh City, Matildas head coach Alen Stajcic is pleased with the teams preparations.

“We’ve had a good preparation over the last two to three weeks, we’ve had a couple of good camps and some training sessions here so there are no more excuses, it’s time to get into it,” said Stajcic.

“I’m really confident with the way we’ve been training and with each session we’ve got better so hopefully we can take it into the game tomorrow and really put Japan under the pump a little bit.” 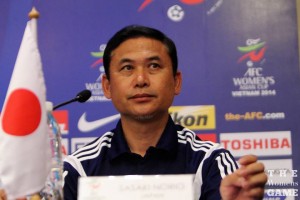 World Champions and Olympic silver medallists Japan enter the tournament as warm favourites to claim their first Asian Cup title.  Although missing a number of players Norio Sasaki is confident Nadeshiko have the depth to cover them.

"We have a lot of players that have less experience than other players but they all have the potential," Sasaki said at the pre-tournament press conference.

"We believe that with these new players in the team, we can still win the title."

There is a mutual respect between the two AFC powerhouses.  Although the world champions lead the head to head, Australia defeated Japan in the semi finals of the last Asian Cup and Nadeshiko are wary of the threat.

"The style that Australia plays is a western style and they are a challenge physically," Sasaki continued.

"They are at very high level so we will need to stay focused throughout this match."

Stajcic himself is under no illusion of the challenge facing the Matildas first up but he is quietly confident his team has the ability to match Japan.

“They’ve got class all over the field and I love watching them play, just not against us.”

“We know we’re playing the World Champions and we know it’s going to be an extremely tough game but we’re going to take a positive approach into it and really try and be proactive with and without the ball, put them under pressure and see what comes of it."

The Matildas are at close to full strength for the opening match although newly crowned W-League Player of the Year Tameka Butt will start from the bench as she recovers from an ankle injury picked up in the April win against Brazil.

“She’s back to a 100 per cent but she hasn’t played for a month or trained for a full week yet so hopefully she’ll come off the bench tomorrow and start against Jordan,” Stajcic said of Butt.

Goalkeeper Brianna Davey will be unavailable as the team take pre-cautionary measures with her minor groin strain.

“Three games in five days in the first part of the tournament in these conditions will be really tough for the group but I think we’ve got the best squad in the tournament in terms of depth so I think that’s one advantage our team has got.”

Kick-Off is at 11.15pm AEST and the match can be seen LIVE and exclusive on Fox Sports 3 and 3HD. 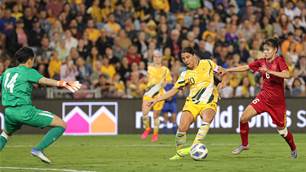