Ten Australians and one Kiwi play in the top division of women's football in England. In total they are at five different clubs.

Lydia Williams, Caitlin Foord  and  Steph Catley  have all been with Arsenal FC since last year. So far this year Arsenal won both its Mind Series preseason games against Chelsea and Tottenham, albeit with without any Matildas present as they were away for the Tokyo Olympics.

Sam Kerr is signed with Chelsea Football club. The club lost their first preseason 2-1 to Arsenal. They then won a preseason against Rangers FC 4-1. Kerr has yet to make her return to the club since the Olympics.

Hayley Raso  made a FAWSL swap earlier this month when she left Everton FC to join Manchester City. City drew Real Madrid for their second-round group stage qualification. They will play them next Tuesday followed by their FAWSL opener that weekend against Raso's old club Everton.

Kyah Simon and football Fern  Ria Percival are both with Tottenham Hotspur. The Spurs lost 4-0 in their first pre-season against Arsenal. They open their FAWSL season against Birmingham City on September 4.

Mackenzie Arnold and Tameka Yallop  are both signed to West Ham United. West Ham won their opening pre-season against Championship side the London City Lionesses earlier this month by a score of 1-0.

They played Championship side Lewes FC this weekend. Arnold was played in the 2-2 draw against. West Ham next play in their season opener against Brighton & Hove Albion on September 5.

Isobel Dalton signed with Lewes FC ahead of the next Championship season after having spent last W-League year with the Brisbane Roar. She started her first game with the Rooks in their 2-2 draw against West Ham. They open their season against Charlton next Sunday.

Football Fern Meikayla Moore also plays Championship football. She signed with Liverpool FC ahead of the 2020-21 season. Moore has not featured in any of the Reds preseason matches. Liverpool open their season against the London City Lionesses next Sunday.

Two Australians and one Kiwi play in the SWPL. Young Matilda Aoife Colvill, who is also a dual citizen with Ireland, is in her second season with Glasgow City.

Matilda Jacynta Galabadaarachchi and Football Fern Olivia Chance are also in Glasgow but with Celtic FC. They also started their season with the UWCL first-stage group stage qualification. Unlike Glasgow their Champions League campaign did not go well.

Celtic FC lost 1-2 to Spanish side Levante in the semi-final. They then lost 3-2 to Minsk. Chance featured in the second game while Galabadaarachchi has yet to make her debut with the club.

The only Australian currently playing in the National Women's Soccer League is  Chloe Logarzo . Logarzo plays with expansion side Kansas City who have struggled this year. She returned, and was present in the stands, for the club's first franchise victory two weekends ago.

Her return to play occurred this week against the North Carolina Courage, who have Football Ferns  Abby Erceg  as their captain. The courage had an inconsistent season, uncharacteristic for a club that has dominated the NWSL for a number of seasons.

This last match though North Carolina showed their familiar attacking prowess. They scored two goals in the first half and two more in the second half, despite being down to ten players after 75 minutes. Both Logarzo and Erceg saw action, Logarzo coming on as a substitute in the 68 minute. The final score was 4-0 to North Carolina, who went up to second in the rankings while KC remained last in the NWSL.

Football Ferns captain  Ali Riley also  plays in the NWSL for the Orlando Pride. She started in her team's 2-1 loss last Sunday. The Pride tumbled to six place in the league, currently sitting in the last play-off spot.

The  @NSWL  league table after this week's play. pic.twitter.com/1gYTMZRUnd

The top flight of the Swedish league returned to play this past weekend after an Olympic break. While Six Australians are currently playing in the country's top flight, three played last weekend with two of them facing each other in the first match of the restart.

Brisbane Roar youngster  Winonah Heatley  signed with Växjö at the beginning of August. She saw her first action with her club by facing  Emily Gielnik  and  Clare Polkinghorne 's club Vittsjö last Friday.

Heatley started and played the full ninety minutes for Växjö in the 0-0 draw that also saw Gielnik get minutes in the second half. Both teams are in the lower end of the Damallsvenskan. Vittsjö remain seventh in the league while Växjö are still bottom of the table, looking for their first win of the year.

Teagan Micah  signed with Rosengård, possibly as a replacement for Canadian gold medal winner Steph Labbé who has been rumored with a move to Paris Saint Germain. Micah joins  Charlie Grant  who is also signed with the team.

Only Micah featured in Rosengård's 6-0 drubbing of KIF Örebro. The win extended Rosengård's lead at the top of the table to nine points.

Elise Kellond-Knight , who is signed to Hammerby, did not feature in their match against Eskilstuna last Saturday.  Dylan Holmes , and her club Häcken have yet to play since the Olympic restart.

The Damallsvenskan table after the Olympic restart. pic.twitter.com/nVaKSgM0bA

One Australian and one Kiwi currently play in the Icelandic top league.

Emma Checker  has played in every minute of her clubs UMF Selfoss' league play since the beginning of their regular season. This month she helped them to a 2-2 draw against Thróttur Reykjavík and a 3-4 win against Fylkir.

Football Fern  Betsy Hasset t returned to Stjarnan after the Olympics. She has seen action twice this month, first in her club's draw against Thór / KA early this month and second in their loss to Thróttur Trykjavík last Tuesday.

Another Australian is competing in the Icelandic second division. Young Matilda  Aideen Keane , who competed with the Western Sydney Wanderers last season is now with KR Reykjavik.

She scored the third goal in her team's 3-3 draw against Grindavík two weeks ago. She then scored the opening goal in their 6-0 win against HK / Víkingur last Thursday. KR are now just one point behind a promotion place and two points behind a 1.deild championship win.

Two Aussies and three Kiwis currently play in the Toppserien.

Karly Roestakken  is still with her club Lillestrom, with whom she played in 2020, but has yet to feature this year due to a long standing injury which required surgery a few months ago. Her club won 2-0 against fellow Aussie  Nikola Orgill 's club Klepp last week. Orgill did not play.

Football Fern  Emma Rolston  joined Arna-Bjornar after the Olympics. She featured in two of the clubs three games since signing. Kiwi  Victoria Essen  played in both her club's Avaldsnes' games this month, helping them in goals to one win and one draw.

Top series table ahead of round 12.  pic.twitter.com/jqtHAAsD7Q 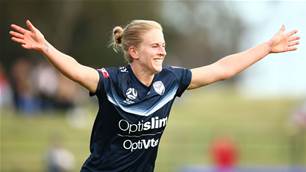 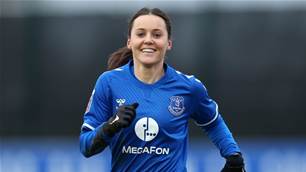