After the international break, 32 Matildas are returning to domestic club play abroad.

Sam Kerr's Chelsea will play undefeated Manchester United at 9:30PM AEST on Sunday, September 25.  After having lost their opening game to Arsenal, the Blues will want to ensure not to drop any more points as they hope to climb up the ladder from their current sixth tier position.

Just above Chelsea in the rankings is Emily Gielnik's Aston Villa who are away to first placed Brighton & Hove Albion at 11PM AEST on Sunday, September 25.  Brighton's points have come from clashes against lower ranked teams, making this a game both sides have a chance of winning.

Kyah Simon's undefeated Tottenham are hosting winless Reading FC.  Her coach has deemed Simon is unavailable for the match due to a hamstring injury.

Mackenzie Arnold and Tameka Yallop's West Ham United then meet Leicester City at 12AM AEST on Monday, September 27.  Both teams will be looking for their first win this year.

The most anticipated match of the weekend will be Steph Catley, Caitlin Foord and Lydia William's Arsenal clash against Hayley Raso and Alanna Kennedy's Manchester City at 3:45 AM AEST on Monday.

The Gunners are currently flying high being undefeated in all competitions so far this year while Manchester City crashed out of Champions League qualifying and have lost one game in the FAWSL.For a league that allows very little room for losses, another defeat by City could mark a difficult journey to their title ambitions.

While Foord was not available for the last Matildas friendly, she has been said to be fit for the upcoming game. According to head coach Gareth Taylor, Hayley Raso is "still struggling a bit".

All WSL matches are available on Optus Sport.

In the Championship Isobel Dalton's Lewes FC are away at Sunderland playing at the Stadium of Light this Sunday at 11PM AEST.  The match should be available on the FA Player.

Ellie Carpenter's undefeated Lyon took on Guingamp on Friday, September 25.  They won the match 4-0, having yet to concede a goal this season in the Division 1. Carpenter played the full 90 minutes.

The other Aussie in the competition Mary Fowler will be away with Montpellier at Stade Reims.  The game is on Saturday, September 25 at 10:30 PM AEST.  With one win and two defeats the club will be looking to turn things around should they wish to vie for Champions League contention next year.

Three Australians have Serie A matches on Saturday, September 25 in Matchday 4 of 22.  Lazio's  Ella Mastrantonio is playing Fiorentina at home at 8:30 PM AEST.  The Roman club have yet to win this year.

Australian coach Joe Montemurro is also playing at 8:30 PM AEST, with his club Juventus facing Empoli Ladies.  Juventus is unbeaten in the Serie A and only behind Milan in goals difference in the ladder.

Retired Matilda Aivi Luik is with Pomigliano.  The club play away at Sampdoria at 10:30 PM AEST. They will be hoping to get their second win of the year. 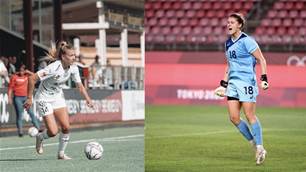