The Young Matildas have been knocked out of the 2015 AFC U19 Championships after a 2-1 defeat to hosts China.

Goals on either side of the break from Qin Manman and Liu Yan saw the Chinese move past Australia and into the knock stages with Amy Harrison's consolation goal not enough for the Aussies.

Two changes were made by Ante Juric with Tara Pender and Alex Chidiac coming into the starting XI.

Australia started slowly with China's composed passing seeing them on top early. China had the first look at goal as Yan Jinjin fired over the crossbar from 15 yards.

The Young Matildas then enjoyed a period of dominance with Larissa Crummer going close before Harrison forced a near post save from Peng Shimeng.

Just prior to the break China surged again and were able to break the deadlock with a counter attack started by Liu Yan. The winger's ball back into the penalty area was met by Manman who tucked it home.

The second half continue in a similar pattern to the first with both sides swapping possession but it was again the Chinese who made the most of these in the 55th minute.

Sharp combination work ended in Liu Yan firing on the Australian goal with the effort palmed away only to fall back to Yan who made no mistake on the second effort.

Juric rang the changes and substitute Princess Ibini almost had an immediate impact with her strong effort turned away by Peng Shimeng to maintain China's lead.

Australia did manage to pull back a goal in the 68th minute thanks to a strong run down the wing from Beattie Goad. Goad cut back to the top of the penalty area where Harrison was waiting to side foot home.

It was a small lifeline for Australia but the Chinese defence held the Young Matildas at bay to claim the points and a semi-final berth.

“We improved on a couple of things [from the Japan game] and were more positive in our performance,” Juric the-afc.com.

“I’d say we deserved more from the game, but China also played well. We’ll get better and learn from the last two games."

“Our team gave an extraordinary effort and did better than the two games you saw.”

Australia takes on Uzbekistan in their final group match on Saturday evening. 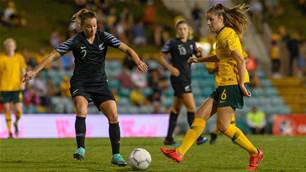