Heading into the Round 11 Melbourne Derby, Melbourne Victory were in desperate need of points to have any chance of a finals appearance, whilst Melbourne City were eager to consolidate their position in the top four.

Heading into the Round 11 Melbourne Derby, Melbourne Victory were in desperate need of points to have any chance of a finals appearance, whilst Melbourne City were eager to consolidate their position in the top four.

To the exuberant delight of the 1,143 fans, Victory took the honours with a 2-1 result. Glorious goals to Melina Ayres and Christina Gibbons for Victory, whilst City’s goal has been officially credited as an own goal from Laura Alleway.

“We backed ourselves coming into this game,” goalscorer Melina Ayers said after the match.

Victory stuck to their game plan. They kept possession, worked the ball through short passing and strong positioning, where in the past they have been guilty of giving it up easily through low probability play.

Victory also displayed complete commitment in their tackles and high tempo play on and off the ball. During the game, Victory Coach Jeff Hopkins was heard to yell “No breathers” from the bench, meaning that Victory appreciated they couldn’t take their foot off the pedal for a moment, lest City gain any advantage. 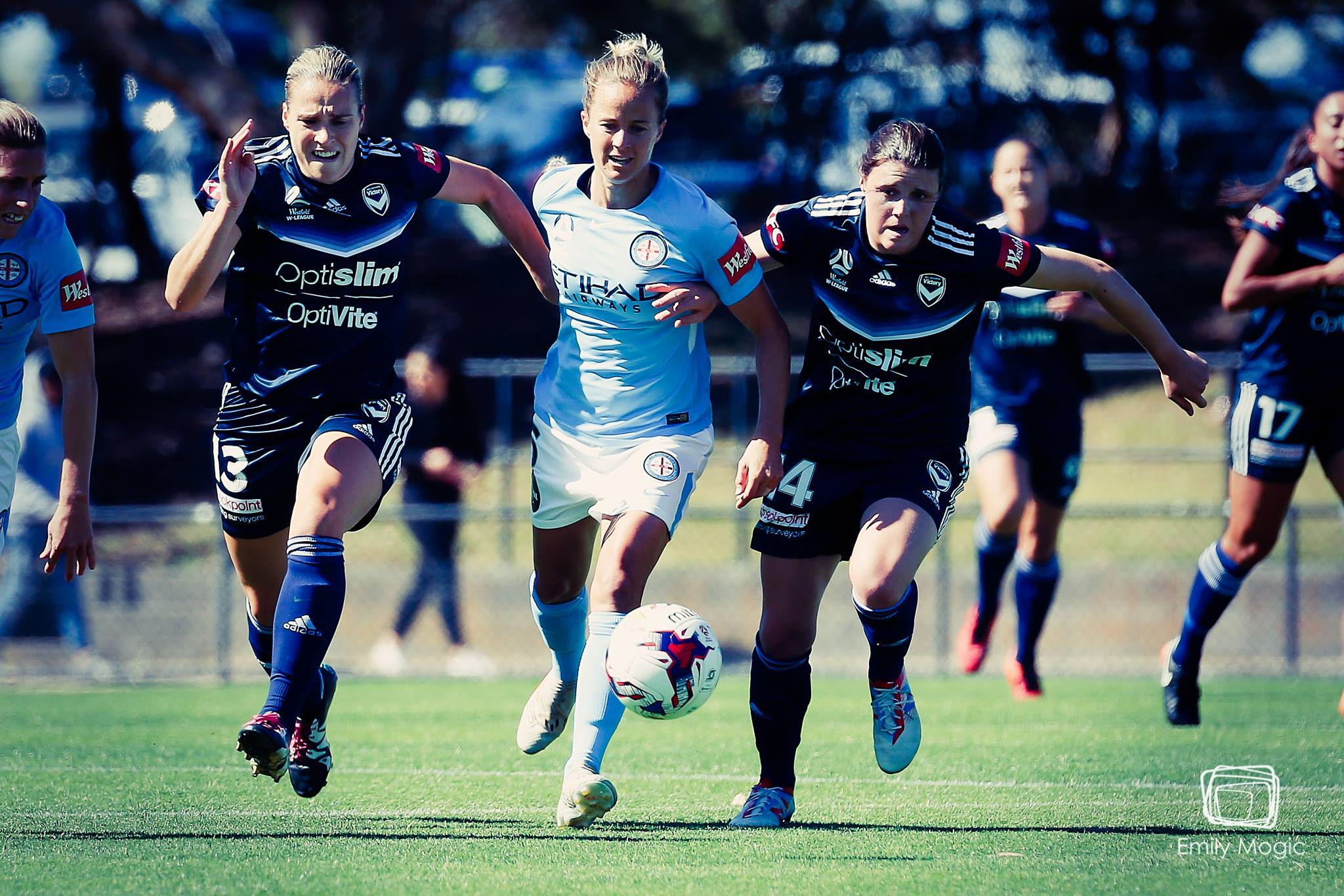 Hopkins commented after the game, “The way we approached the game, we were very positive. We had a game plan and credit to the spirit of the players. You go one nil behind against a very very good side and we didn’t stop believing.”

“This is what we have talked about over the last few weeks - the self-belief. After last year it has taken a bit of time to get there. We need to believe in ourselves a little bit more. That was a real test for us.”

“The main thing was defensively we were pretty sound. Especially in the middle area of the field. What we tried to do for most of the game was, if we could win the ball high up, get back into a real good solid compact defensive block in the middle and just try and stop them penetrating through the middle.”

“Again there were times where they dominated possession but we were prepared to concede a bit of field possession because we knew we would frustrate them and counter-attack from there,” Hopkins said.

City weren’t allowed to monopolise possession in the way they usually do, but they still looked strong and threatening throughout the game.

Their rotation and movement created overlap and chances, the difference being that Victory held onto them, pressed and came back time and again. 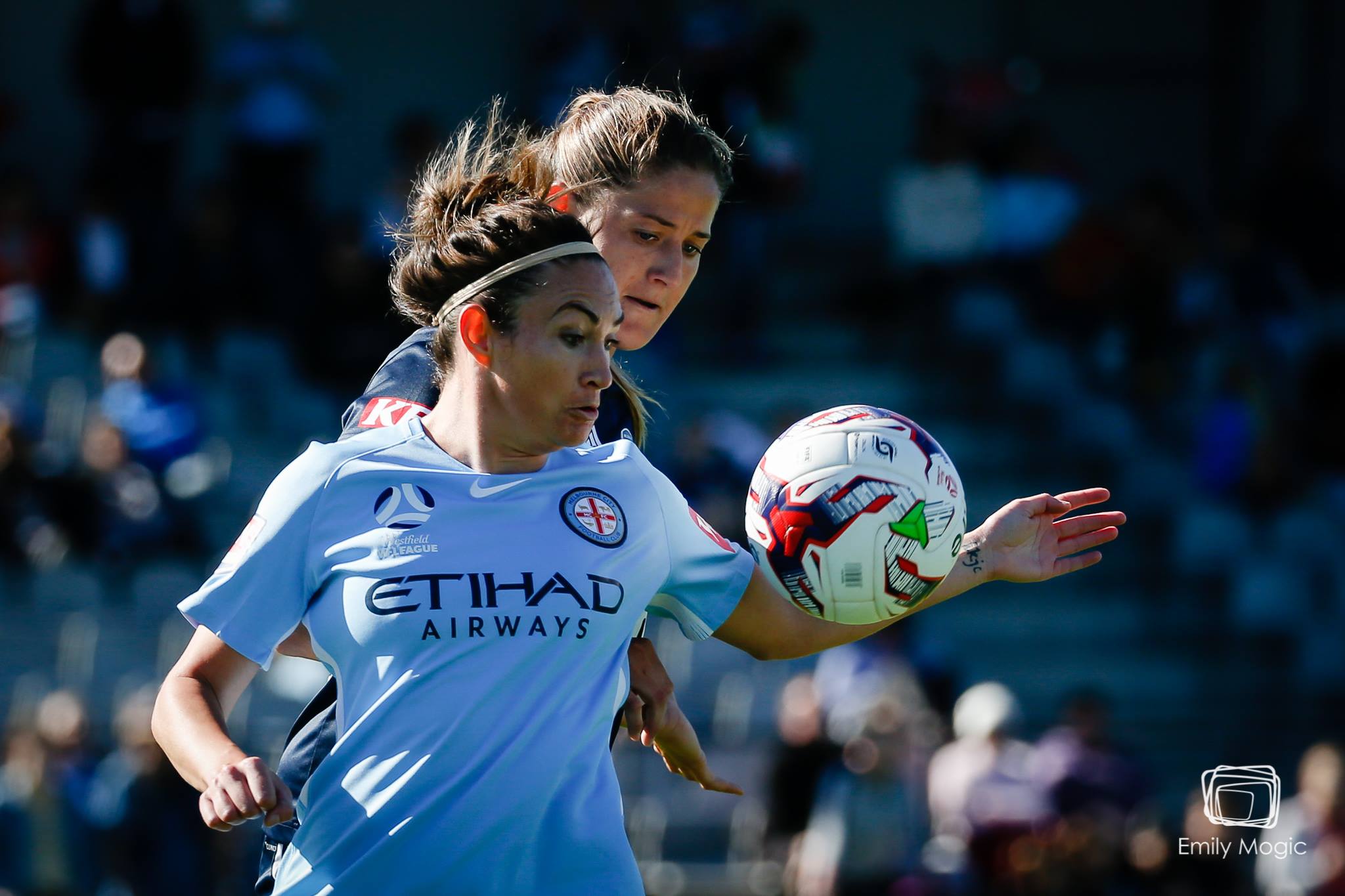 With a strong breeze favouring City in the first half, you could see them manoeuvring the ball into the danger zone but Victory were ready to shut down their threatening crosses. Save for a few set pieces, City really struggled to push Victory’s defence.

Where City usually penalise any lapses, they weren’t given much to work with such was the hypervigilance of Victory.

Annabel Martin held the advantage in the matchup against Tyla-Jay Vlajnic, allowing Victory space to work the ball out of defence.

Victory’s defenders in general took the honours against the City forwards. Alleway and Angela Beard in particular controlling at the back, whilst Casey Dumont was huge in goals to thwart City’s efforts.

The midfield was fairly evenly matched. A quiet day for Jess Fishlock perhaps a key factor in the end result.

“I saw her dribbling and I thought I’ll back myself and try and win it. Once I did I saw she was a bit off her line so I’d throw it on the boot and it went in.”

Melbourne Victory are on the road heading north to take on the Western Sydney Wanderers in a broadcast match on Friday evening.

With every point vital for Victory at this stage of the season, Hopkins is ready for the challenge, “Every game is a tough game in this league. The league is very very even and I don’t look at any game as an easy game. If we can take the belief we showed here, the commitment into the next game I think we can beat any team.”

Melbourne City are at home at AAMI Park on Sunday against the red-hot league leaders Brisbane Roar.