It was stormy times down at Lakeside on Friday night, with thunderbolts lighting up the city skyline.

It was stormy times down at Lakeside on Friday night, with thunderbolts lighting up the city skyline. Despite the contentious conditions, a solid crowd turned out to see the Western Sydney Wanderers take on the team just below them on the ladder.

The game was an even match, reflected in the scoreline of 1-1. However, both deployed different strategies to nab the point.

“That game was brutal. Each team was working very very hard out there… On both sides, the ball was not going in the net. We were hitting the post, we were missing wide. It just wasn’t there for either team.” - Lo’eau LaBonta.

Victory’s game saw them move away from a defence-centric approach as seen in previous matches. Whilst this saw some slick play from the midfield and beyond, it also resulted in them being caught out on a couple of occasions from a quick WSW counterattack. 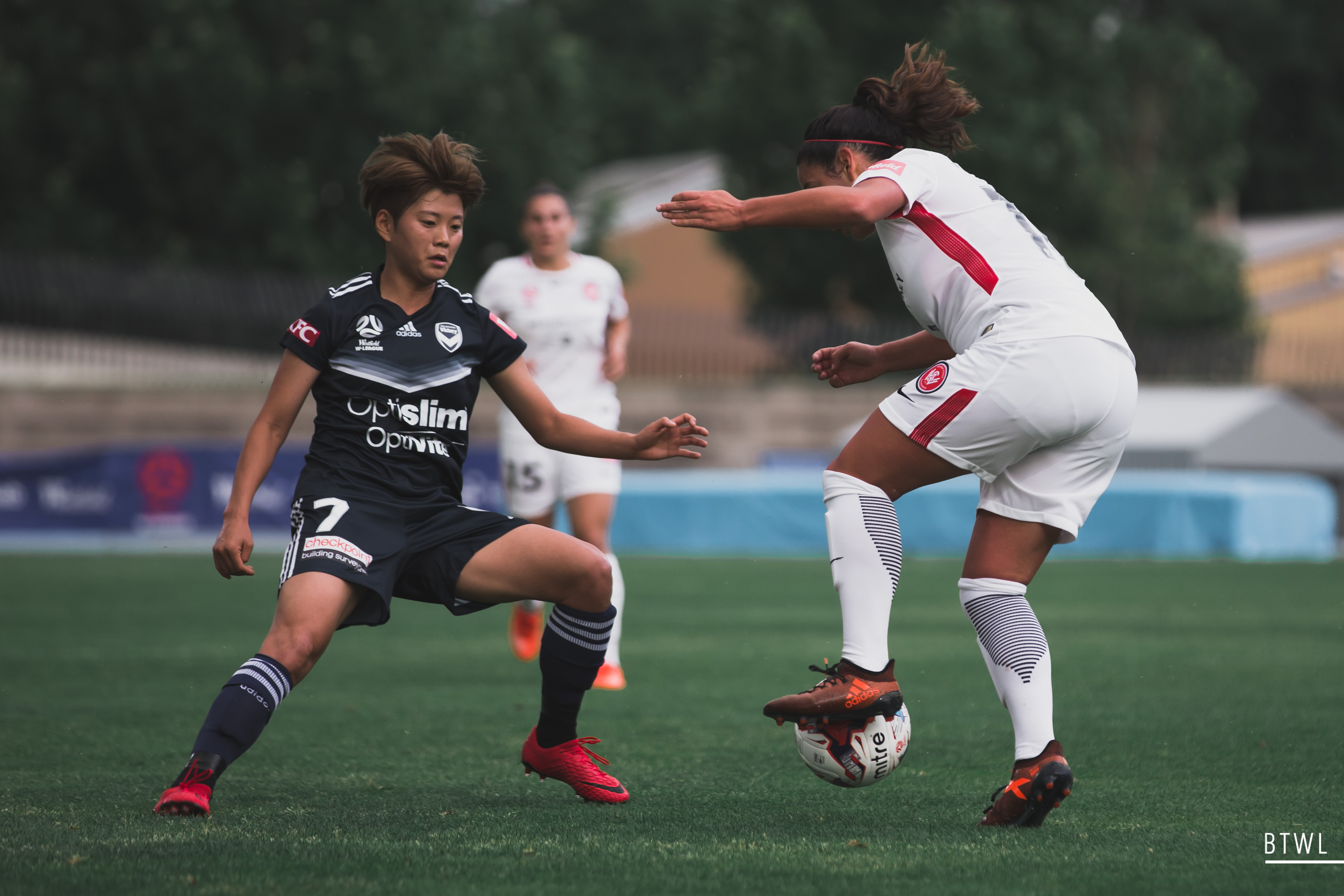 In terms of attacking, international Jeon Ga-Eul was crucial in creating the options in the final third and was always quick to contend for the ball. Melina Ayres played a little deeper than usual on the right flank, and provided some excellent service into the box. She also wasn’t afraid to hold down her own chances, hitting the crossbar approximately fifteen minutes in.

Whilst the build up was impressive from Victory, the finishing was far from clinical. It will be important for them to work on this looking into the future.

Defensively, the omission of Matildas Laura Alleway was mediated by the shift of Alexandra Gummer to the centre and the return of Kristen McNabb. Attacking chances for Victory were most productive when the defence didn’t rush to clear the ball out.

Support from Gulcan Koca was significant - as noted in the past, her versatility makes her an essential component for the side and her work, especially in the defence, did not go unnoticed.

“That’s probably one of the best things about our squad: we have a lot of players that can play in different positions. McNabb went away, and Gummer stepped in. Now Loz [Alleway] has gone away, and [McNabb] has just stepped back in… We’ve always had the players there.” - Casey Dumont

Full back Angie Beard continued on her positive trajectory. She has physicality, attacking spirit and protects fiercely.

Whilst much of the game saw the Wanderers having to keep a hungry Victory at bay, they weren’t without their own chances.

Quick to respond once Victory had come back behind the ball, players such as the speedy Erica Halloway were able to get on the end of the wide ball and run up the flank before Victory had time to reassemble. In turn, her crosses in created dangerous times for the likes of Rachel Lowe and Maruschka Waldus.

Once in the box, they struggled to stretch the defence and put some power behind their shots. However, Halloway’s persistence came to fruition shortly after a break in play due to the lightning. Scrappy defending left Dumont caught near post and Halloway wasted no time in volleying it into the bottom left corner. 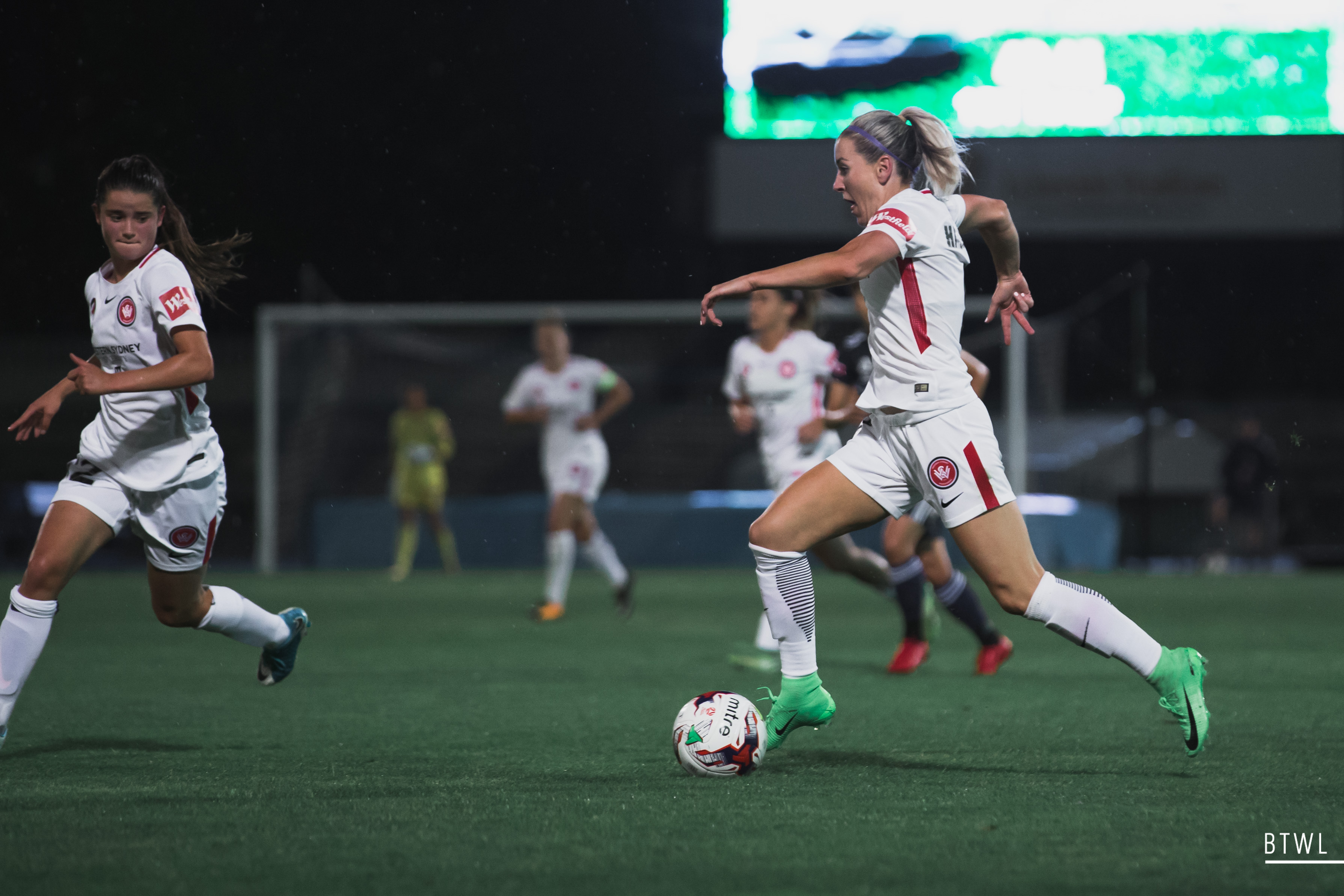 “I think our team switched off and didn’t clear the ball properly. That happens in a game and it was really good [that] our team turned it around. We fought hard to get another goal.” - Casey Dumont

Lo’eau LaBonta was stand out in the centre of the park. Not only did she defend hard and look to link through onto the wing, she was unafraid to take a shot herself, many of which were not easy saves for Victory keeper Casey Dumont.

“[Those opportunities] come from the girls working hard, getting the ball, holding up and making space for me. So I’m really just working off them and they create those opportunities for me. And I try and set them up sometimes when I get it back.” - LaBonta.

Whilst they were kept busy, some of Victory’s chances came from defensive errors. Notably, Jada Whyman came off her line only to be challenged by star striker Natasha Dowie, who on more than one occasion seemed to have a clear shot on an open goal.

However, the equaliser came from different circumstances: Laura Spiranovic had a crack, but the ball deflected off WSW defence. Dowie was quick to leap in and plant the ball firmly in the bottom left corner, equalling Caitlin Friend’s W-League wide record for number of goals scored by a single player (14).

Both sides demonstrated remarkable drive for the winning goal. The last fifteen minutes were peppered with shots from all sides as the ball shifted between both ends of the pitch.

Next week, Western Sydney Wanderers will return home for their own Friday night game, facing off against Perth Glory at 4.30pm at Marconi Stadium. Victory will head interstate to play Sydney FC at Cromer Park on Saturday, kick off at 4pm.