Newcastle Jets FC announced serious championship intentions on the road in Round 13 with a hiding of Canberra United.

The match was evenly poised through an hour of play, including some controversy over one of Newcastle’s goals – but it blew wide open in the final twenty minutes as they put the sword to United.

It was Newcastle’s first win over Canberra away from home, and the first since Season 1. 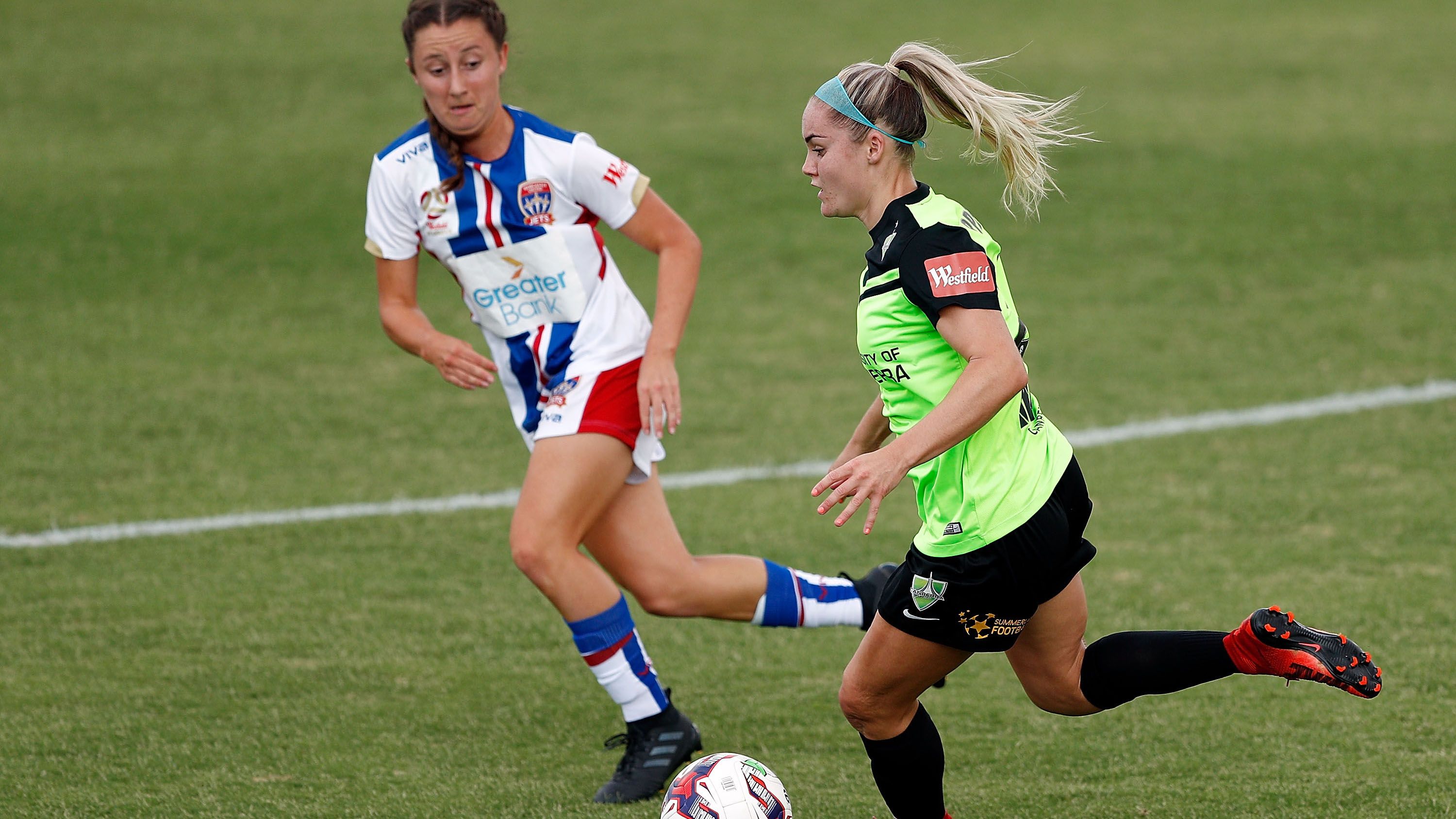 For Canberra United coach Heather Garriock, Sunday saw a game of two halves, the disappointing second where her side lost control of both the contest and their finals chances.

“Going into halftime I felt we played some really good football, and they caught us in the transition… a few calls went against us but that’s just the way football is," she said

"At half-time, we were super confident and positive in the change rooms.”

The side went into the sheds within reach but needed to lift their game to match Newcastle. Unfortunately, there wasn’t enough urgency – and the game slipped further away in the second term.

Captain Michelle Heyman was left disappointed with the loss but took some positives, saying Canberra played well and as a team.

“It’s hard to come back from 2-0 down, we managed to do it last week and I think we had that fight within the team,” she said.

Amy Sayer again played out of her skin and would have to be making space in her trophy cabinet for Canberra’s most improved this season. She pounced on loose balls, fed through Grace Maher and Ellie Carpenter and even had a few shots on goal.

The pairing of Ashleigh Sykes and Elise Thorsnes that has been seamless in a few outings didn’t fare quite as well against Newcastle, but Ellie Carpenter turned in another quality performance. 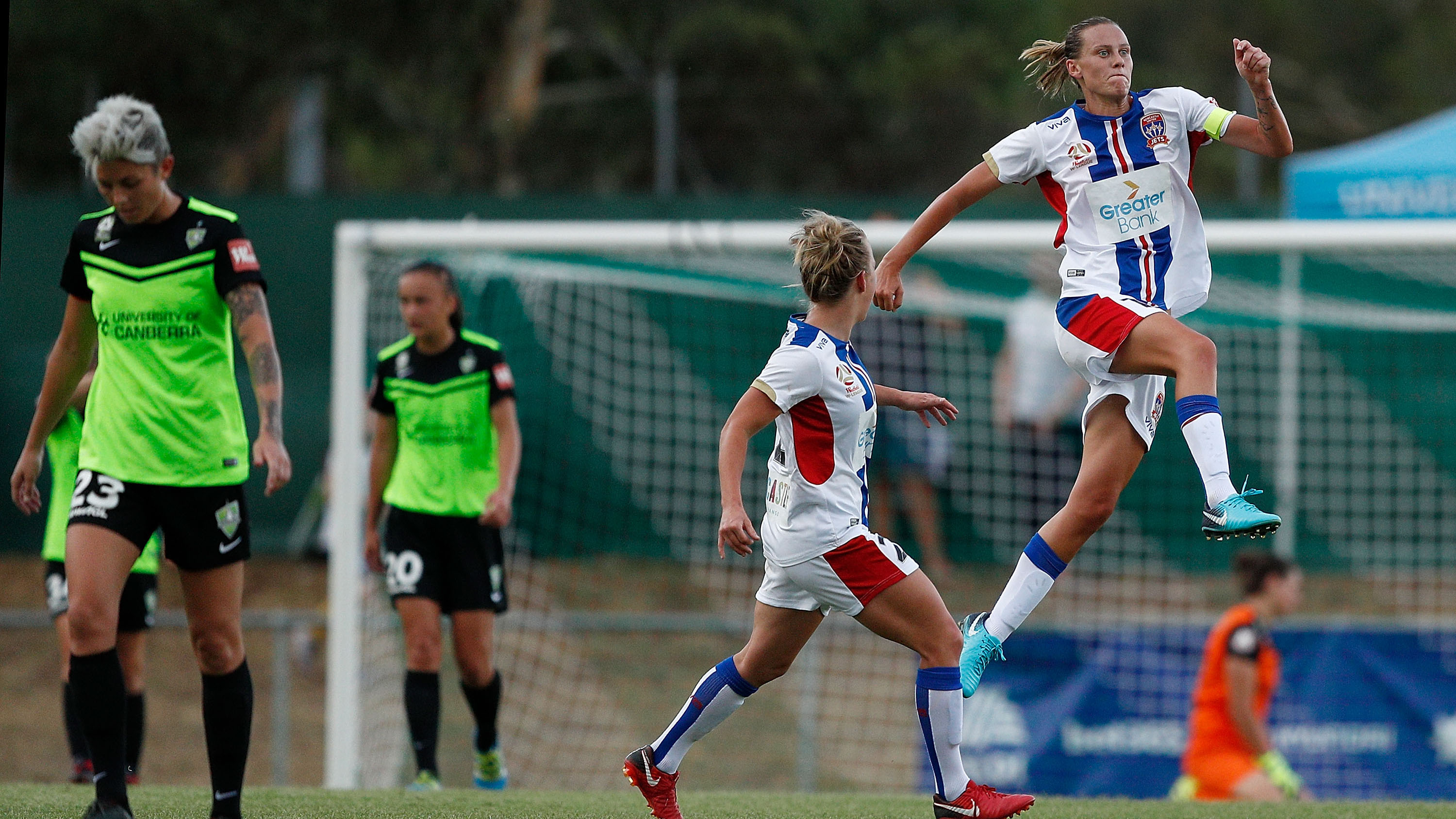 Playing a team with their season on the line when against a side looking for their second finals appearance in 10 seasons, was always going to be interesting but the Jets arrived in Canberra up to the challenge, and then some.

Hannah Brewer, at McKellar Park for the first time following her shift up to Newcastle FC for Season 10 was delighted with her return.

“We always knew coming down here it was going to be a great game, and McKellar is always a great atmosphere and a great field to play at, I was excited to come down and show this year what Newcastle have.”

Van Egmond was happy with the win, feeling the three points made their six-hour bus trip home easier but she knew it took a team effort after the first half.

“We went into the sheds a little disappointed with ourselves just because we let them back into the game," she said

"The first 5-10 minutes were going to be difficult, because Canberra had the momentum with that goal they got just before the half but credit to the girls we came out and really just went after the game and I think to be able to score five goals against an experienced Canberra United is very pleasing for us.”

Neither Brewer nor Van Egmond would be drawn on which side they’d prefer to meet in finals football, a symptom of the unpredictable nature of this season.

“It doesn’t really matter who you play against, you just have to show up on the day and give it your all,” Van Egmond said.

Newcastle host Melbourne City with one eye on how their finals opposition is performing.

Canberra United travel to Brisbane to face Roar with a win following favourable other results their only avenue to finals football in Season 10.