There used to be a show on Australian television called New Faces. It was hosted by Bert Newton and featured, you guessed it, new talent coming up in Australian entertainment.

There used to be a show on Australian television called New Faces. It was hosted by Bert Newton and featured, you guessed it, new talent coming up in Australian entertainment.

It certainly would have been an apt title for this round’s cracking instalment of the Canberra United v Sydney FC rivalry that ended in a 3-2 victory to Canberra.

Canberra and Sydney have each experienced a high turnover of personnel in the offseason, both on and off the field, and while some stalwarts are still in place, they are practically new look set ups.

Sydney FC certainly looked the goods in the first half. They owned the first 25 minutes, despite the well orchestrated goal from Michelle Heyman in the 12th minute off the back of good combination play from Ellie Carpenter and Ash Sykes. Sydney had Canberra’s new goal keeper Haley Kopmeyer at full stretch on a number of occasions either tapping the ball around the corner, or at least ensuring the goal was covered. 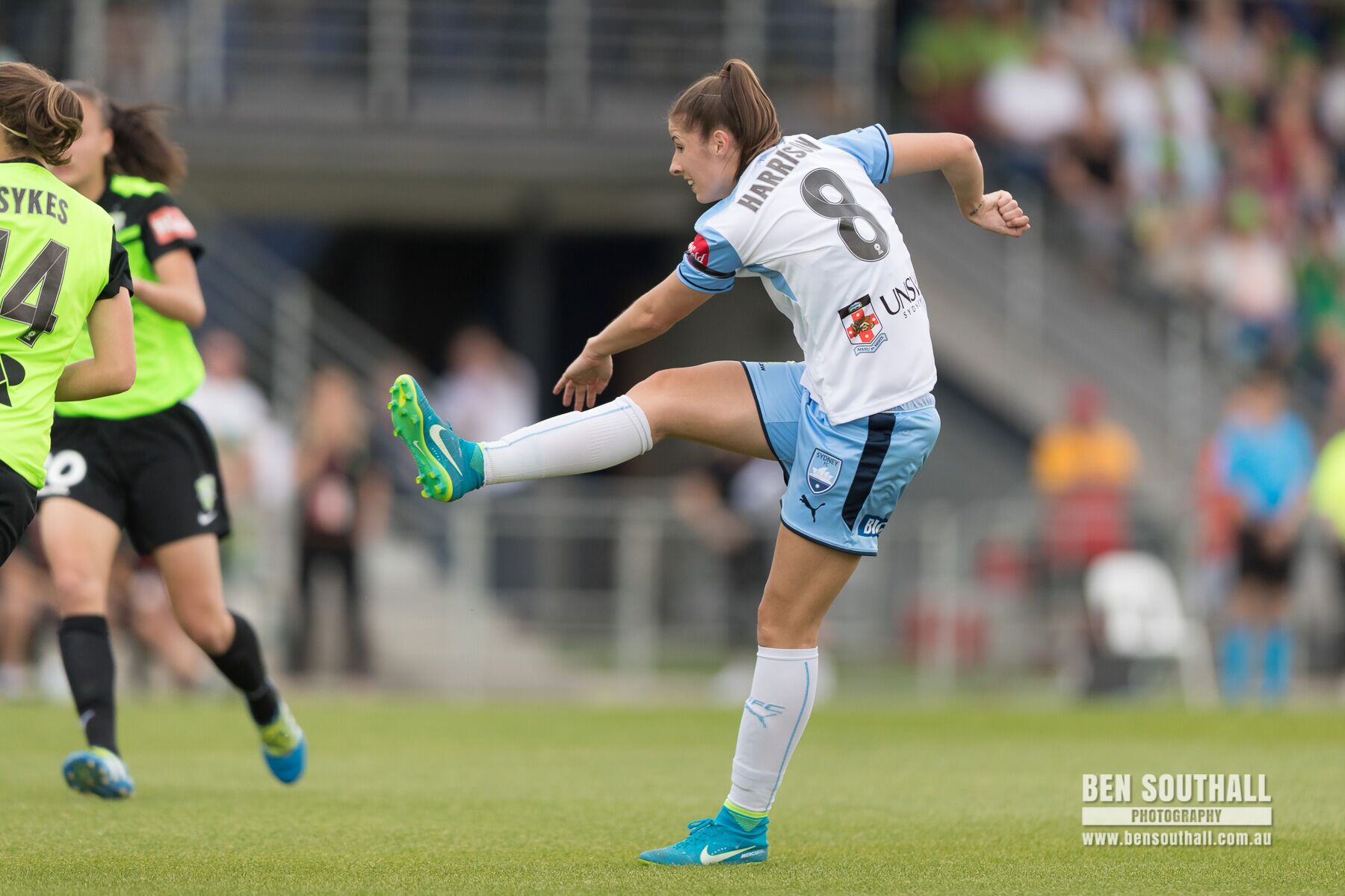 Canberra was forced to scramble and clear early a tactic they were well equipped for with the physically powerful Toni Pressley, Kendall Fletcher and Laura Bassett shoring up the centre backline and midfield.

Sydney FC exposed Canberra’s left sided defence on a number of occasions through Georgia Yeoman-Dale and Princess Ibini, until coach Heather Garriock switched the more experienced Ellie Carpenter into left back which plugged that leak. Madelyn Whittall looked stronger on the right side, despite being up against Lisa De Vanna, with Ashleigh Sykes to feed the ball to, and Canberra worked their way into the match.

The play was physical with plenty of shirt tugging and midfield clashes, drawing free kicks and warnings, and eventually a handful of yellow cards. It was Lisa De Vanna who took advantage of the referee Reibelt’s more liberal use of the whistle when, running alongside Toni Pressley, she dropped to the ground in the box.

The ensuing penalty was finished clinically by Kylie Ledbrook and Sydney FC headed into the changeroom with a scoreline that still flattered Canberra, given Sydney FC’s dominance for much of the half.

The second half was a more equal affair, with Amy Harrison continuing to create Sydney FC’s best chances through exquisite balls lofted into De Vanna whose volleys and bicycle kicks were impressive but not quite on song. Canberra United stepped up across the park, with Grace Maher providing a more fluid connection through the midfield, and Ellie Carpenter and Laura Bassett creating more space and feeding useful balls through Sydney’s defence to Heyman and Sykes.

Sydney FC’s second goal was scored again by Ledbrook from the spot. Amy Sayer from Canberra and Amy Harrison from Sydney FC tangled in the box as a Sydney FC corner came in and Riebelt pointed straight to the spot.

From there, Canberra finished the stronger, with the influential Teresa Polias subbed out of Sydney’s midfield and Amy Harrison also subbed off. Chloe Logarzo who was outstanding in the first half seemed to lose her way in the second half, committing needless fouls in contests she could probably have won with skill and speed. 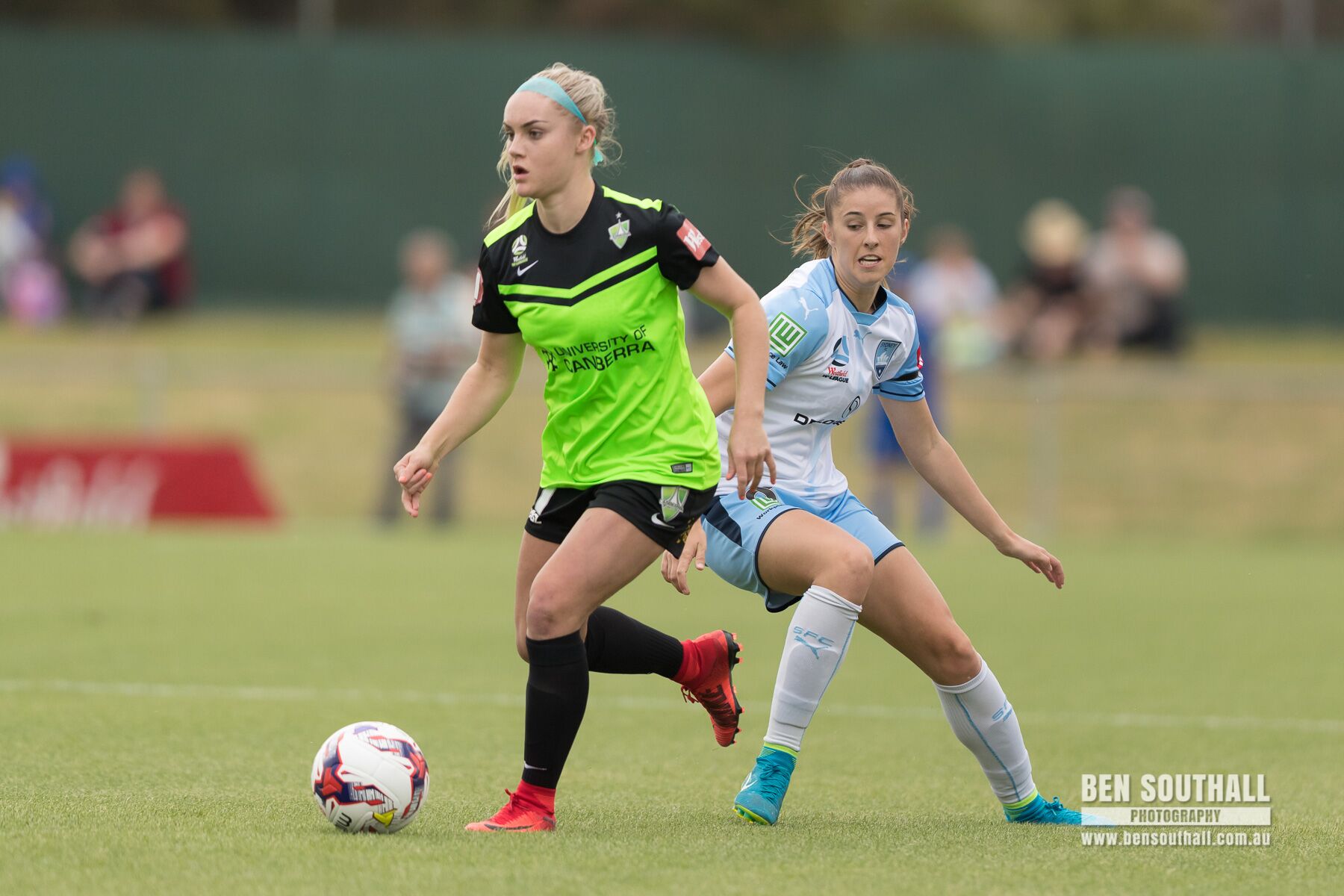 In contrast, Canberra United found more space through the midfield and enjoyed better combination play as the match went on. Their pressure through multiple freekicks on goal and exquisite corners from Maher saw Heyman’s header on goal saved off the line but Pressley completed the attack to equalise, and shortly after, Heyman scrapped a goal at the end of a pressuring period on goal.

Sydney FC were visibly upset after the match to be leaving empty handed but have plenty of promise, showing the lightning combinations of Sydney FC teams of the past. On the flipside, Canberra United were delighted to complete the win for their co-captain Ash Sykes who celebrated her 100th W-League match, and Heather Garriock was pleased to pick up her first victory as a W-League coach.

“I’m feeling relief and I’m really proud, to show the character from the team to come back from being down. When the ref gives away a penalty, it’s out of your control. It’s a one on one with the keeper, and Ledbrook’s never going to miss from there. But our team didn’t drop their heads and it showed great character,” Heather Garriock

When asked how much of a difference the returning Young Matildas made, Garriock was quick to sing the praises of Ellie Carpenter. “Ellie was outstanding today as far as her athleticism and power. In saying that, I think Caitlin Munoz changed the momentum of the game today. She lifted the team, and played some superb balls through.” 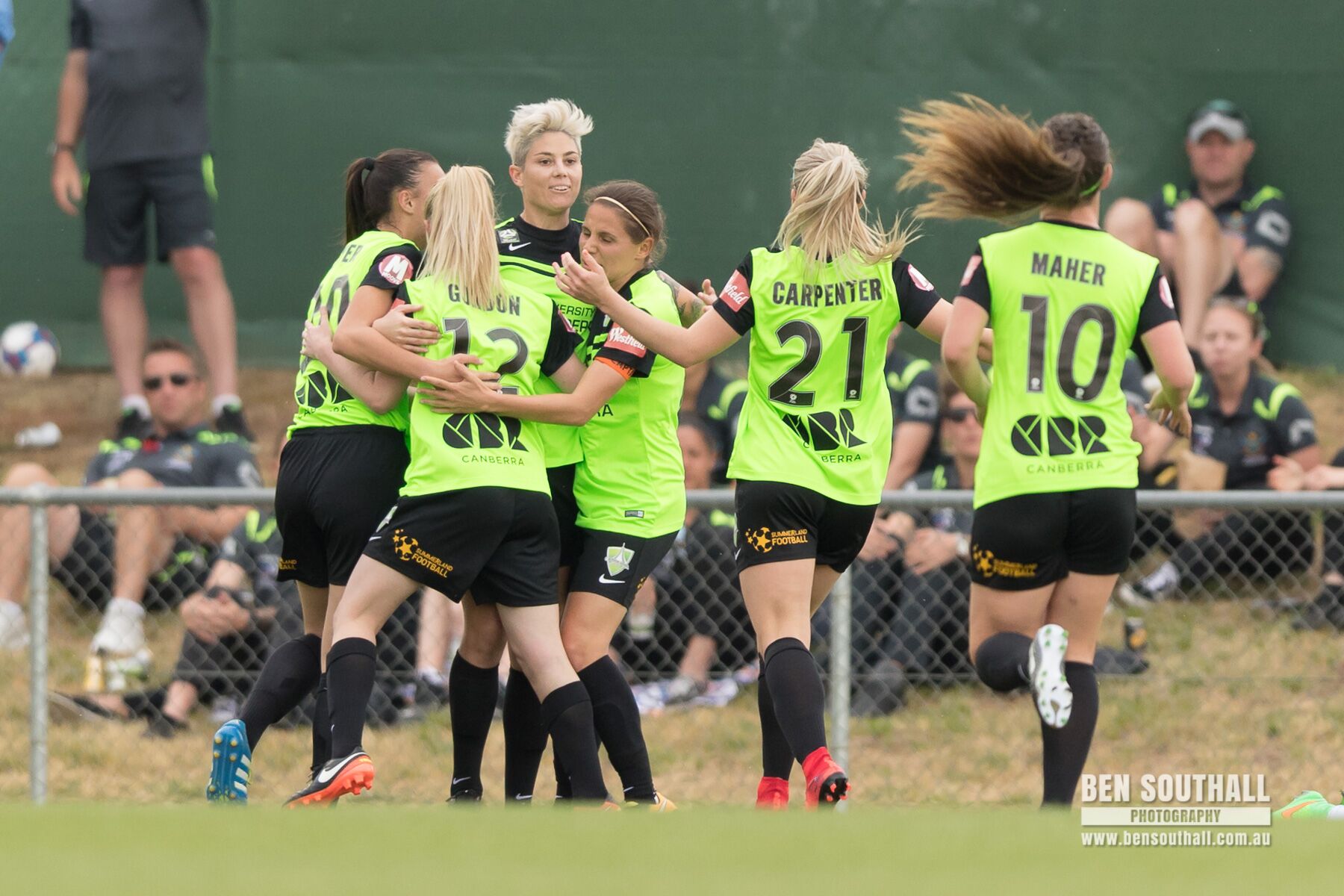 After the match Ash Sykes celebrated her 100th appearance and was presented with a personalised jersey by the local minister for sport, Yvette Berry MLA.

Garriock was full of praise. “Her loyalty is for this club. You think of all the different coaches and other players who have come and gone, and she said again today she would never play for another club. I absolutely love coaching her.”

Heyman added “Sykes is just a workhorse. We’re just ying and yang. I love that she was a defender in the States. We now have a striker who knows how to tackle!” Garriock was quick to quip “She calls it ying and yang, I call it chalk and cheese.”

Sykes was understandably tired after a tough match and a big weekend running Capital Football’s Powerchair Football weekend at the Australian Institute of Sport in her role as manager of Game Development. She had enough energy to sign plenty of autographs for the 1,003 fans at the match, pose for photos with the Rose City Riveter’s Cascadia United banner, and introduce The Women’s Game to her mother Rose Sykes. 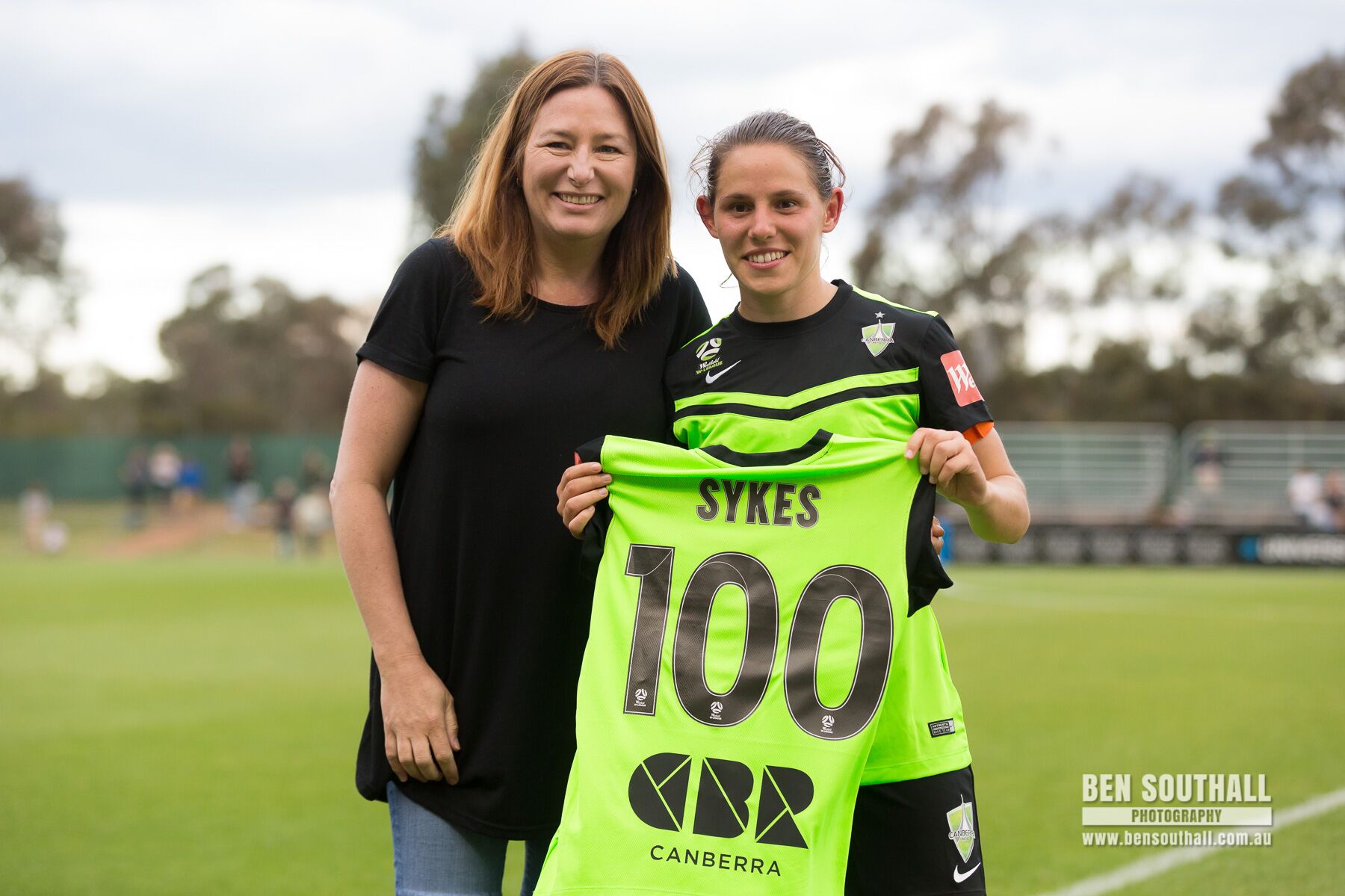 When reflecting on Sykes’ momentous year, Rose lit up. “It was fabulous that the Thorns won the championship and it was a great team and a great atmosphere. We went over and watched a few games. It was… unbelievable. It was a whole different level of football. They were all so welcoming to Ashleigh and she learnt a lot.”