Canberra United left McKellar Park jubilant with their 2-0 win over Western Sydney Wanderers, who played with discipline and creativity that troubled Canberra for large swathes of the match.

Canberra United left McKellar Park jubilant with their 2-0 win over Western Sydney Wanderers, who played with discipline and creativity that troubled Canberra for large swathes of the match. It took until the 75th minute for Canberra United to break through, with a celebratory goal to co-captain Michelle Heyman to top off her 100th W-League cap, and another just a minute later to the impeccable Elise Thorsnes.

The game served up a number of ‘family’ reunions, with Ellie Brush captaining the Wanderers against the side she captained and then starred for in the first nine W-League seasons, Ellie Carpenter lining up for Canberra against the Wanderers who launched her national and international career, and Jenni Bissett and Kahlia Hogg, both former United players making cameo appearances on the bench and off, respectively.

The home team was off to a stunning start with Michelle Heyman in the mix early. Jada Whyman in goals for the Wanderers was the star as she intercepted Sykes’ cross to Heyman early, then Heyman’s cross to Carpenter close to the goal line in the opening minutes.

For the first 15 minutes, Canberra played with the confidence they left off with after their big win against Adelaide United in the previous round. Heyman was in everything early on, even tracking back into defence in the 11th minute.

From there, Canberra was called on to defend, and reverted to habits formed in the early rounds. 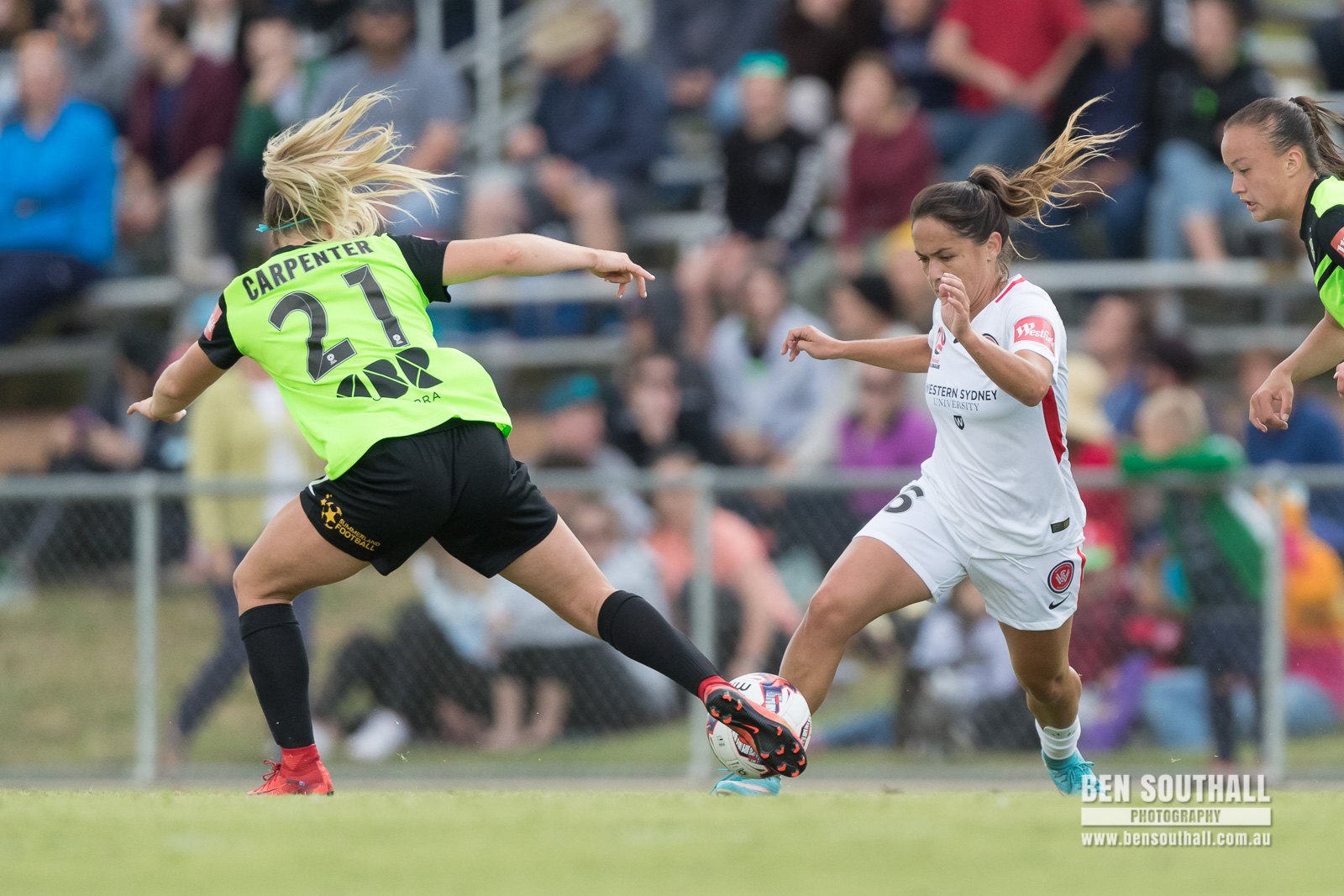 “We didn’t execute the game plan and circulate the ball around early on - we were going too direct. So as soon as we changed that and changed our mindset, everything started changing for us.” Heyman said after the match.

Garriock agreed. “Coaches are never happy with a performance, but the disappointing part was the first half. We didn’t execute our game plan… When we play like the Canberra United we play in training, we’re direct, we’re sharp, we’re very good, we have the self belief. But until we get the first goal we play very tentatively and we need to put some planning in place for training over the next few weeks.”

She added “Of course I was confident we could win. We had good width, which we added to again when Carpenter moved to the backline and [Liana] Danaskos came into the midfield. I say it every week, but [Haley] Kopmeyer saved us again. She’s such a sensational goal keeper, and a top signing - she’s been the backbone of our team.”

The Western Sydney Wanderers came into the game halfway through the first half. They played themselves in by nipping at the heels of Canberra’s midfield, and then enjoyed the space provided by Canberra’s midfield who were happy to maintain a zonal defence, allowing the Wanderers to carry the ball right to the edge of the 18 yard box at times.

The Wanderers kicked off the second half well. Lee Falkon found spaces between Canberra’s midfield and defence, and given space, she fired off a shot that only Kopmeyer could deny. 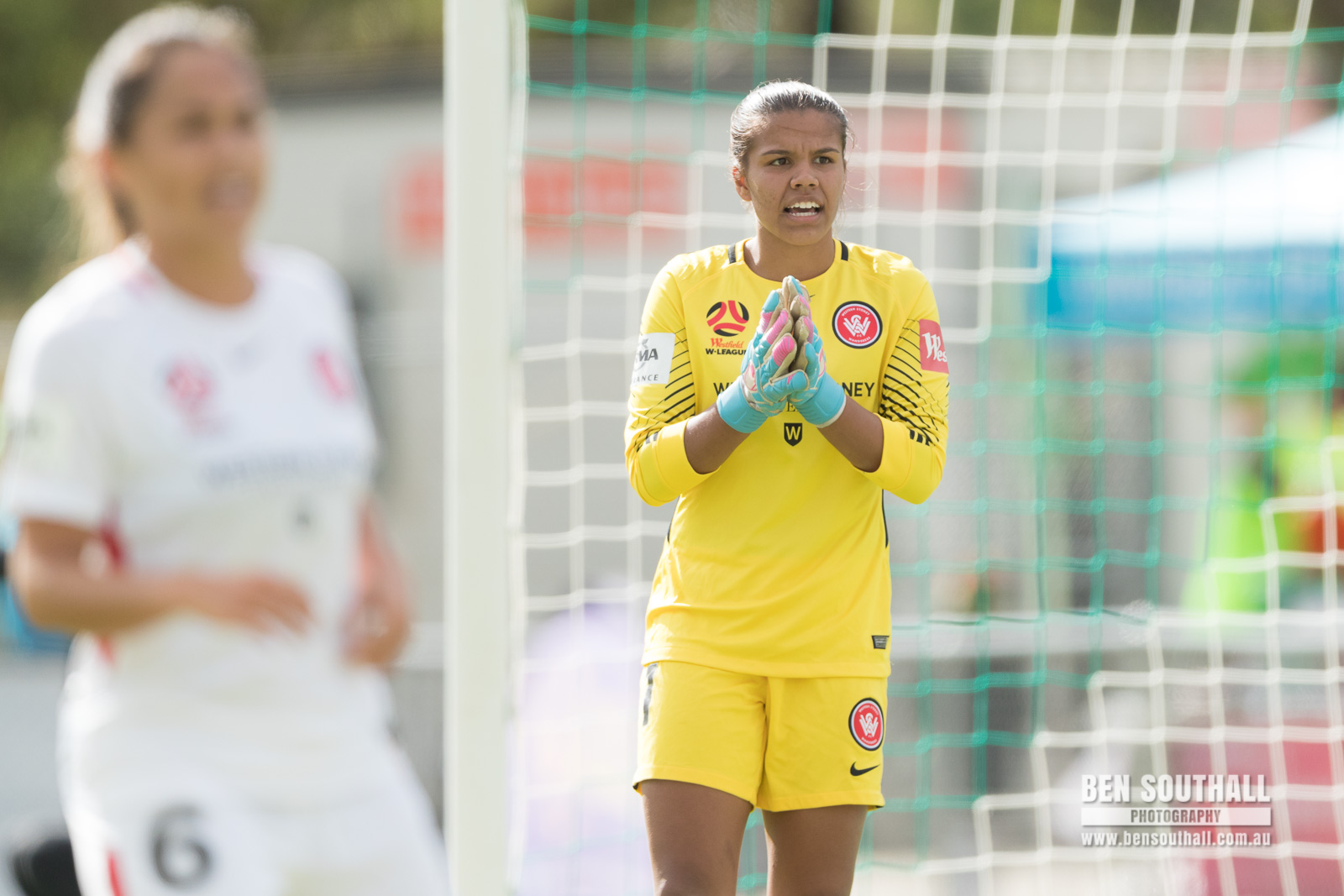 The combination of Falkon, Erica Halloway and Marlou Pieete was creative and well organised. While they didn’t show the blistering breakaway attacks we are used to seeing in Australian offences, their team play was incessant and effective at wearing down Canberra United.

Ellie Brush diffused many Canberra attacks with her customary headers, and nearly put the ball past Kopmeyer at the other end, while Jada Whyman was a strong presence throughout and her confidence in the air allowed her backline to set up for attack early.

Sadly for the visiting Red and Black Bloc who camped behind both goal mouths, the Wanderers couldn’t sustain their stable defence in the heat of Canberra’s sharp period and two quick goals ensued.

Canberra faces Perth Glory in an exciting match up, a very long way from home in Bunbury WA, in a game that they desperately want the 3 points from. Currently on 15 points, a win would put them into the top four, just ahead of Newcastle Jets who are enjoying the bye this weekend. A loss would put Perth onto 16 points, jostling for a spot in the top four against Melbourne City, also on 16 points.

The Western Sydney Wanderers are at home against Melbourne Victory who were jubilant after their Melbourne derby victory last weekend.