Adelaide United have knocked ladder toppers Perth Glory off their feet with a stunning 3-1 win, rewarding fans with an exciting display of football at Marden Sports Complex on a warm and muggy Friday afternoon.

Adelaide United have knocked ladder toppers Perth Glory off their feet with a stunning 3-1 win, rewarding fans with an exciting display of football at Marden Sports Complex on a warm and muggy Friday afternoon.

The favoured Glory side were without their two key players in Sam Kerr and Nikki Stanton, both ruled out of the match due to a quad strain and a broken arm respectively. The home side, on the other hand, was boosted by the return of the 2017 PFA Young Player of the Year Alex Chidiac.

It took Adelaide only four minutes for striker Makenzy Doniak to open the scoring, and went on to nab another two goals to complete her first W-League hattrick. A struggling Perth side managed to take back control of the match in the second half, and forced an own goal by the Adelaide defence to claw one back. 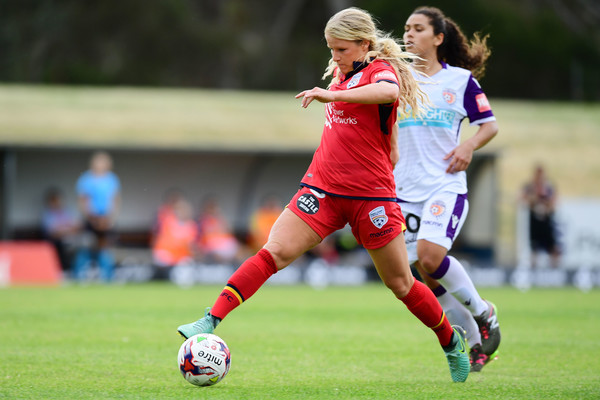 The home side committed to pressing high from the get-go.  The high press forced a large number of errors in Perth’s defence, and crucially, in Adelaide's attacking third.

Though overall Adelaide were losing out slightly on possession, they succeeded in stringing up effective passes to service their attackers just in behind Perth’s backline.

That, alongside with the combination of Adriana Jones and Doniak up top, makes for lethal and clinical attacks to punish Perth.

“That’s what strikers are there for, they need to make that percentage of shots on goal and goals scored at a high ratio, and she [Doniak] really improved that,” praised coach Ivan Karlovic.

Perth came back firing at the start of the second half, which put Adelaide’s defence under considerable pressure and exploited some of the lapses they had.

The Reds were slow to get back into their defensive shape, and looked vulnerable at times. Communication was also lacking which caused some confusion when clearing their line.

When Perth were able to string together, two or three phases of attack, the Adelaide defence found it difficult to clear the dangerous.

“I thought we did drop off a bit and invited some pressure which we knew Perth were going to give, but we responded well after that,” Ivan Karlovic said. 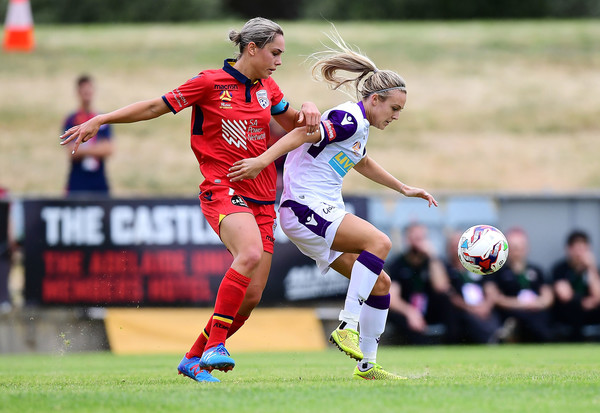 After a sluggish first half, Glory appeared to be re-energised upon the resumption of the match. They applied more midfield pressure and dictated the game, with play occurring deeper in Adelaide’s defensive half.

Perth’s hard work came to fruition in the form of an own goal conceded by Reds’ skipper Emma Checker, when Hill sent in a lovely cross into the penalty box.

Perth full backs Natasha Rigby and Patricia Charalambous did a solid job of nullifying most of the home side’s runs on both flanks.  This effectively prevented them from feeding crosses into Melissa Maizel’s penalty box, and confined a lot of the play to the centre of the field.

Raquel Rodriguez was outstanding in the middle of the park. Even though she was forced to drop back deeper due to a missing Stanton, the Costa Rican international managed to link up with fellow midfielder Nicola Bolger to create numerous opportunities for the attacking line.

In the opening half, the Glory side looked flat and were missing the attacking energy brought about by the Kerr-Hill connection.

The movement up top in the opposition third that was so evident in the opening rounds was less evident this week.  It didn't help that their ball players in Rodriquez and Nicola Bolger, even Hill were forced to drop deep to collect the ball.  The result was that the final third of their build-up came undone each time, leading to a greater percentage of attempts from outside the box than in previous weeks.

While in the first couple of rounds they looked more sure on the ball, they could have benefitted from more meaningful possession and be a little less frantic on the ball.

Adelaide United will be on the road to face Brisbane Roars at Suncorp Stadium on Friday night. On the other hand, Perth Glory can finally head home west to play on familiar grounds against Melbourne Victory, who have had an extra week to prepare, coming off a bye.