"I am delighted to be joining the Boston Breakers this season and cannot wait to arrive to start the new campaign," said De Vanna.

"I played against Boston last season and saw that they are a young team with lots of talent, so I hope with my experience and the recruiting of new head coach Tom Durkin and moving to the famous Harvard Stadium sets us up for the challenge of winning the league this season." 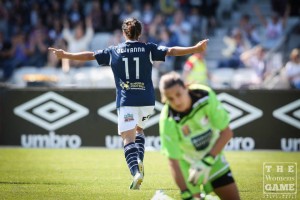 De Vanna finished equal second top goalscorer in the W-League regular season with seven goals and was instrumental in the Victory's finals run, including scoring in the Grand Final against the Brisbane Roar.

The striker was recently left out of the Cyprus Cup squad with The Women's Game informed she was 'working through some decisions'.

Boston recently lost some firepower with De Vanna's Matildas teammate Kyah Simon unavailable for the season with an ACL and US striker Sydney Leroux moving to the Seattle Reign.

De Vanna scored five goals and added two assists in 16 games for Sky Blue FC in 2013 including a bicycle kick goal against the Boston Breakers that saw her nominated for the 2013 FIFA Goal of the Year.

“I am very excited to bring Lisa to Boston. She is without a doubt one of the top strikers and goal scorers in the women’s game,” Boston Breakers general manager Lee Billiard said.

“She is exactly the kind of talent I wanted to bring in. She’s passionate about the game, a winner, and an incredible talent.”

Despite the trade, it appears De Vanna will still be unavailable for the Matildas Asian Cup preparation

The Breakers open the 2014 NWSL season on 13 April at Seattle Reign FC.