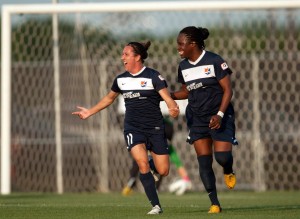 With a sibling residing in Melbourne, there was early speculation that De Vanna would not be returning to hometown team Perth Glory. De Vanna been close to playing for the Victory last season but by the time an offer was made, she had already committed to the Glory.

In early August Edmondson had indicated that Victory would be seriously pursuing the attacker after she had spent a number of weeks training with his NTC squad and her signing is a coup for Victory and Edmondson.

@ryanmarkdee are you going to be my number support now I'm victory girl?! ????

While strong defensively in previous seasons, Victory has long struggled to score goals and the acquisition of the 28 year old, who played for NWSL side Sky Blue FC in the W-League off season, gives the Melbourne front third a cutting edge.

De Vanna adds to what was already building as an exciting front half with Seattle Reign midfielder and recent FA Wales Women's Player of the Year Jessica Fishlock committing.

At the other end of the experience spectrum Edmondson has acquired one of the best young defenders in the country in Emma Checker.

Currently on tour with the Young Matildas, Checker has already made her senior debut and will add some versatility at the back.  Although groomed to play as a central defender, the 18 year old has also been deployed at full back to great effect.

Edmondson will be hope these two signings will assist Melbourne Victory in going one better in Season 6.

Melbourne Victory kick off their W-League campaign on 10 November with a grand final rematch against Sydney FC.