Bodey only started playing footy in March for the Saints in Cairns whilst she was on placement as a physiotherapist for university.

The 23-year-old returned to Brisbane and signed with the University of Queensland team, where in her first QAFLW game just two months ago she booted two goals.

“Somehow Craig found out and invited me to Winter Series. I then rocked up to training the next week with the Lions, so it’s been a bit of whirlwind,” Bodey said.

“Very crazy, a bit overwhelming to be honest, but it’s exciting."

Bodey has been with The Gap for the last two seasons and at one stage trained with the Brisbane Roar.

She's been labeled by coach Craig Starcevich as having a natural ability for Aussie Rules.

“She reads the play very well, is strong in the contest, and is already an exceptional kick," he said. 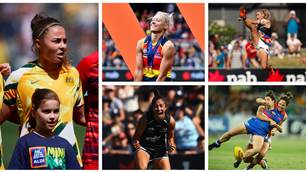