Korea Republic coach Yoon Deokyeo has announced his 20 player squad for the 2016 AFC Women's Olympic Qualifiers to be held in Osaka, Japan.

Korea Republic coach Yoon Deokyeo has announced his 20 player squad for the 2016 AFC Women's Olympic Qualifiers to be held in Osaka, Japan.

International based players Ji Soyun (Chelsea Ladies), Cho Sohyun (Kobe INAC), and Jeon Gaeul (Western New York Flash) headline the namely Korean based squad that will look to qualify for the Olympic Games for the first time in the program's history.

In camp in Mokpo, Korea since 4 February 2016, Yoon Deokyeo has used the camp to evaluate players with World Cup members Kwon Haneul, Kang Yumi and Lee Eunmi left out.

The Korean coach has also looked add some youth with former AFC Young Player of the Year and 2013 AFC U-19 Championships MVP Jang Selgi coming into the squad.

"I selected players who are in the best physical condition and can go out and perform in matches, and are capable of playing in different positions," said Yoon.

"I think we have players who are good in the middle of the pitch, and can pass the ball and connect with teammates."

The team will depart for Osaka on February 25 with Korea Republic kicking off their tournament against neighbours and fierce rivals DPR Korea on 29 February 2016. 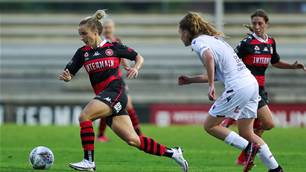 The best pics from Wanderers vs Glory

'We can tidy up' - Coach unfazed by Wanderers' set-piece woes