With the W-League season wrapped up, many players are plying their trade locally and overseas. Three Australian players are trying their fortunes in South Korea’s relatively unknown WK-League.

With the W-League season wrapped up, many players are plying their trade locally and overseas. Three Australian players are trying their fortunes in South Korea’s relatively unknown WK-League.

It’s an unfamiliar territory for Australian Players in general, with only Servet Uzunlar having played there previously 2013 for in Chungbuk Sportstoto.  However, with the strength of the AFC, it could be the early beginnings of a strong relationship between the leagues.

With 28 rounds, including 4 byes, plus an All-stars game mid-season, the WK-League has only just kicked off on March 14th.  Much like the W-League, it has an objective of developing national team players, it should be a competitive environment.

Amy Jackson (Melbourne City) has signed with powerhouse Incheon Hyundai Steel Red Angels.  Having never missed the finals, the Red Angels have been champions for the last three seasons and runners up for the remaining four seasons.

Jackson, who has played overseas at a US College and for Dutch side SC Buitenvelder, was pro-active in plotting her off-season move.

"I completed my MBA in November and decided that I wanted to be a full time professional footballer for the remainder of my career."

"I was contemplating a move back to the US but decided I was ready for a complete lifestyle change, again! From a football perspective, it's the best move I have made."

For Jackson's City and Melbourne Victory teammate Racheal Quigley it was through an unexpected contact.

"An agent named Isaac had been tipped from another player/friend of mine, that I could be interested in playing overseas," she remembered.

"Once he found football footage of me on YouTube, he contacted me with the details. I remember coming off the phone and saying to Mum, 'this can’t be real.'"

It was real and after Quigley's highlights packed was shopped around the various WK-League teams looking for a striker, Hwacheon KSPO WFC moved quickly to secure the 25 year old's move to Korea.

"Once the club agreed, I was told I would be leaving within 2 weeks. Everything happened so quick after that. My life changed completely within 2 weeks!"

"An agent contacted me in regards to potentially making the move to South Korea," said the defender.

"I initially turned it down but reconsidered and committed when another agent made contact." 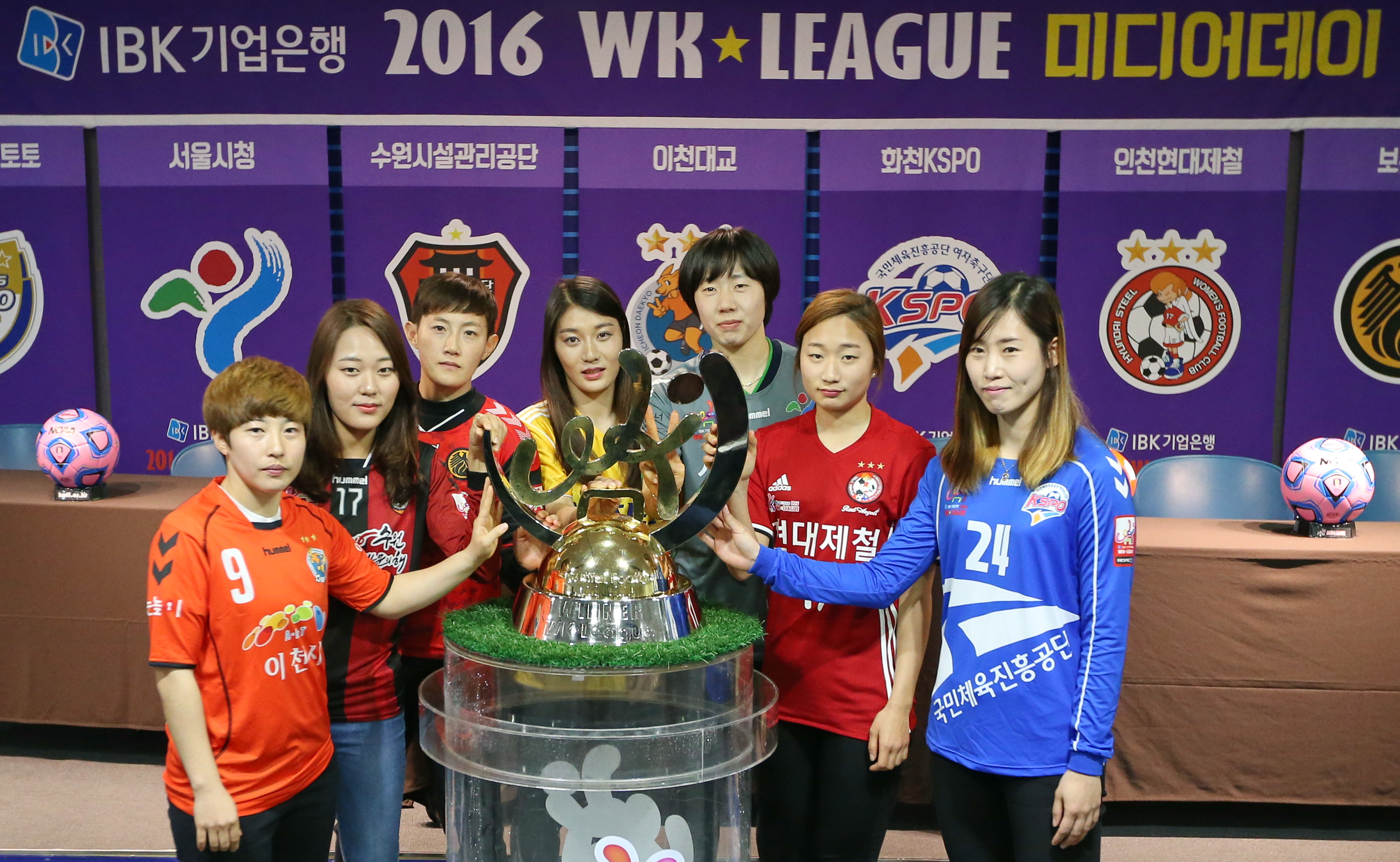 The 7 team league is building a solid reputation

Despite the strength of their national team, the Korean league has little visibility within the women's football community.

For the trio, the experience has seen them navigate linguistic and cultural differences as well as the football side of the equation.  Jackson has revelled in the challenges.

"I love the Korean culture," she said of her early impressions. "I am in an environment where respect is a focal point and I am inspired by my team mates and coaches on a daily basis."

"I am slowly adapting to the Korean lifestyle and will begin language lessons soon. The communication barrier is the most challenging aspect thus far, and whilst entertaining for my team mates, it can be quite frustrating on a personal level."

"My apartment is close to the city and is full of cafes, meaning coffee is everywhere so I am surviving!"

Playing football around the world has been Quigley's dream and her stint in Kansas City in 2013 only whet the appetite.

However, the changes between the USA and Australia are on a different level to the acclimatisation process for Korea.

"This experience has been like no other I've ever had," said the South Australian.  It has been a pretty rough start for me though, first week was hard with the language barrier."

"The first girl I met in my team knew some English which was refreshing and I thought to myself 'this won't be as hard as I thought' until i realised every other player/coach only knew like 3 English words!"

Quigley hasn't been left alone to flounder with Hwacheon KSPO WFC providing support including an interpreter to help with the adjustment period.  Language hasn't been the only hurdle but the rest have been easier to work through.

"The next speedbump to adapt to has been the food, to be completely honest, I actually love it!"

"I've tried absolutely everything the team has provided for me and apart from a couple spicy foods.  On another note, my chopsticks skills have excelled immensely!"

The language barrier has also been a challenge for Gema Simon but, unlikely Quigley, she hasn't had the benefit of a translator to ease the transition.

"The girls in the squad have been very welcoming but the language barrier is hard at times without a translator."

"It’s most difficult during training with the coaching staff trying to explain what it is we are trying to achieve. Luckily football is a universal game so a lot of the times you can figure it out by watching demonstrations and hand movements the girls try and help out also it is like a big game of charades half the time."

Simon has had to also had the added layer of living with the team regularly with her Suwon squad provided with living quarters and meals by the club.  While a atypical way of life for a footballer, Simon has embraced it and is looking to share her own experience.

"As an international player coming into the squad I want to have a positive influence on the squad and do what I can to help the team be successful in whatever role I am given." 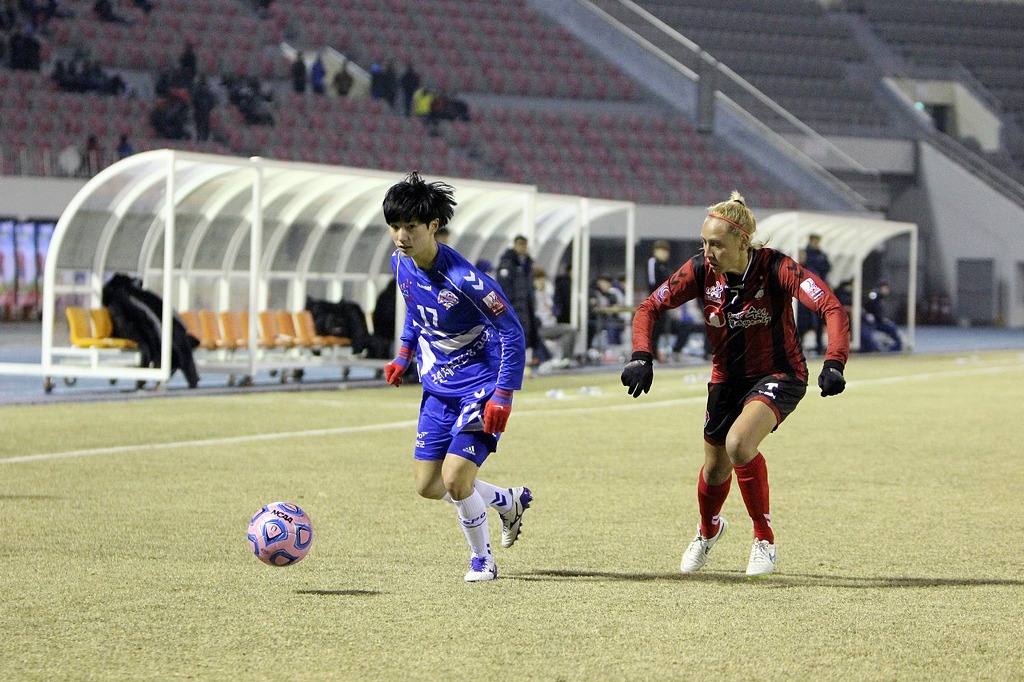 Gema Simon in action for Suwon

Just 30 minutes outside of the cosmopolitan and bustling Seoul stands Suwon; a city of 1.2 million people in the province of Gyeonggi-do.

It is a world away from 250,000 city of Newcastle and it is where Gema Simon finds herself for the next six months.  Simon didn't have much time to adjust before the football, the reason for this trip, started in earnest.

Not long after landing, the defender and her team underwent a two week training camp in a rural area about 4 hours from Suwon.  For the eight season W-League veteran, it was a glimpse into the reality of her football odyssey.

"I would have to say it has been the hardest preseason I have experienced in my career," said Simon.  "Our training load has continued to be very full on compared to that in Australia most days we have double sessions which run for an average of 2 hours."

"A lot of the time it is mind over matter as the training intensity is high for majority of the session but at the end of the day I wouldn’t want to be doing anything else but playing football professionally."

Quigley is of the same mind.  The striker's recent W-League season saw her plagued with injuries requiring surgery.  It meant that she only saw game time in one match; the first time she has played so little football in her career.  Getting back on the pitch regularly in the Korean environment has been welcome.

"The football, for me, I’m in a football heaven," she said. "The girls’ touches on the ball are on another level."

"All combinations are one touch, so fast and my brain is constantly being tested every single training session."

"Our coaches are super passionate and constantly remind our team how much belief they have in every player, it definitely shows in the way each player performs."

It's an insight into the development of a league that has been around close to the same period as the W-League. Off the pitch, the league is relatively stable.  They also provide live broadcasts of matches streaming online via YouTube as well as highlights packages posted during the week.

On the pitch, even for Jackson who played for the star studded Melbourne City, the level has been an eye opener.

"The technical training I am receiving is unlike anything I have experienced previously," said the midfielder.

"I am privileged to be on an excellent team with an amazing coach so I believe I am in the best place possible to take my game to another level."

She will certainly have the time to do so with matches coming thick and fast.  All in all the 7 team league will see 28 rounds with matches played on a Monday and Thursday.

While the league is made up mostly of South Korean players, the Australian trio are not the only internationals to join.

"The football here is of a high quality, with each team full of experienced players," said Jackson with Simon agreeing.

"On the field the game is played at a very high intensity. It is more about combination play and movement off the ball with limited touches."

"The technical ability and mentality of the players is very impressive. It comes across as counter attacking play for 90 minutes but in saying that it is very early in the season and it is a good experience to be involved in such a different style of football."

Four rounds in, and while Jackson's Red Angels are flying at the top of the league, it has been a tougher start for Simon's Suwon and Quigley's Hwacheon.

Personally Jackson and Quigley's experiences have already been positive with Quigley making a strong first impression.

"Fortunately I had a dream start to our first game of the season against Suwon, coming off the bench and scoring the game winner in the last minute of the game."

"There were crazy celebrations with the team and honestly there is no better feeling!"

Simon's start has been more mixed with injury in the opening weeks keeping her on the sideline.  However, there is a long way to go in this league.

Giving it a go

For the trio, their time in Korea is all about the experiences; football or otherwise.  That's not to say they don't have big ambitions.  Jackson, who was a former Young Matildas, is hoping more strong performances will see her get a look in at senior Matildas level.

"I want to win a league championship here and put myself in the best condition, physically and mentally," she said.  "I want to steer myself towards a senior national cap."

For Quigley it is also about continuing her football development with an eye to the Matildas, but first it is about getting back on the pitch and enjoying the game.

"After having a pretty horrible 2015, undergoing surgery and numerous injuries, my number one goal is to get my body into the best condition I possibly can," she stated.

"That then leads into my next goal to perform the best I can for my KSPO team and become leading goalscorer for the league. As for my long term goal it is and always has been to be a part of the National team."

While injury has put a hurdle in Simon's road, the 25 year old is still set on her goals.

"I have to continue to do the work and perform each week to show that I deserve to keep my spot."

"I am grateful for the opportunity I have been given and I want to take full advantage. I want to learn as much as possible both on and off the field."

They may not be breaking new ground, but you can be sure there will be plenty of Australian players keeping a close eye on the progress of Jackson, Simon and Quigley as they answer the call of Korea.