Half time on December 22nd, 2013.  Sydney FC were 1-0 up over the home side Brisbane Roar at Olympic FC, Brisbane.

The seasoned striker didn’t need to cast an eye over her left knee.

She had heard that all too familiar "pop" upon impact but was still holding out hope, only due to the fact that the injury didn't feel as sore as the previous time she had done it.

Unfortunately, this was Amy Chapman's second rupture of her ACL on her left knee. The right had also previously succumbed to this season ending injury, but thankfully, both of her first two ACL ruptures had happened some time ago.

Chapman's fears were confirmed no less than 24 hours later and her team mates and fans were left reeling.

The close knit family of the W-League began flooding in messages of support, whilst Amy knuckled in for the difficult realisation of the challenges ahead; days before Christmas.

Chapman is definitely no stranger to ill-timed injuries.  After a stellar Season 5, she was gearing up for the highly anticipated semi-final against traditional rivals Sydney FC to be held at Brisbane's QSAC Stadium.

An innocuous injury sustained during training that week had sidelined Chapman and immediately the team's confidence and infamous starting formation took a heavy knock; one that the Roar could not come back from resulting in a disappointing loss to an elated Sydney FC.

Other high profile footballers have also succumbed to the curse of ill-timed injuries.

Kate Gill did so less than 3 months out from the 2011 Women's World Cup after coming off a year that saw her crowned the 2010 AFC Women's Player of the Year.

Long serving but now retired Matilda, Thea Slatyer also narrowly missed out on the  tournament due to a minor knee complaint that needed medical attention, agonisingly close to the deadline of squad selections.

Then Head Coach, Tom Sermanni decided that it was too risky to select Slatyer, devastatingly ending her hopes to represent her country in Germany.

Presently, Chapman is  now acutely aware of the heavy schedule of Matildas duties that she'll miss out on in the first half of 2014, including the W-League finals and the Asian Cup.

Rehab. The second most dreaded R word in sport (after retirement).

That is the reality for Chapman as well as Kyah Simon, Maddy Searle, Bianca Gray and Ashley Brown for 12 months.

Post-operative rehabilitation focuses on mobilising the joint back to its full range of motion and maximum strength.

It's a painfully slow process and has arguably a conservative timeframe of 12 months before a player's ACL rehabilitation has been technically complete.

There is much discussion surrounding the typical 'stand down' period administered to our elite athletes but most agree that after the 6 month mark, it depends by and large on how strong the initial graft is holding, and then to take the return to full fitness on a month by month basis.

Chapman is planning on ticking all these boxes with her meticulous rehab and knows mentally, by experience, of what it takes to be a member of the infamous 'knee club'.

But outside of the physical rehabilitation, she has shifted her focus from playing football to ardently supporting football in the way of encouraging her team mates to cherish their health and fitness and to always play to their full potentials.

Like other injured athletes managing long term rehabilitation,  Chapman still has to look at other non-footballing ventures to occupy her time.

Once the initial minimal immobilisation of the joint stage has been complete, athletes can then begin to look for employment opportunities and in Amy's case, preferably within her completed field of study.

These opportunities also need to fit in with the body's ability to cope with extended periods of standing, sitting and lifting.

Maintaining a presence within the football community and mentoring and assisting from grassroots to elite players is also a high priority of senior players,  with the activities helping to keep the footballing mind sharp.

Most importantly, athletes have to be prepared to 'hit the ground running' in 12 months, and have the fitness and confidence to immediately give 100% to elite levels of competition.

One team, one goal 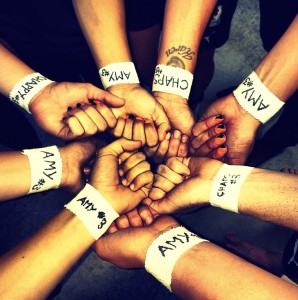 Team mates will play a large part in keeping Chapman involved until she’s back on the pitch with them.  Roar midfielder, Katrina Gorry credits Chapman as always being inspirational to both her senior and junior squad members.

"The strength she shows drives us to work harder and cherish our time on the field," said Gorry

"We mention her name every time we step out on the pitch and we hope to bring the trophy home for her."

It was Laura Alleway's idea to don the 'Amy Chapman' armband for the recent Brisbane Roar/Newcastle Jets clash.

This complimentary group gesture received quite a host of media attention, most notably in Queensland's Courier Mail.

Not only validating the Roar's comradery but also shining some positive media coverage on women's sport and exemplifying the mateship in women's teams; widely accepted but rarely promoted.

Goalkeeper Kate Stewart also echoes the sentiments of Gorry, stating that at their first training  back (after Chapman's injury), "everybody vowed to support Amy however they could and to make sure that she still feels part of the team."

There was a similar out-pouring of support recently for Melbourne Victory's Ash Brown, who agonizingly, re-tore her ACL during her first game back from twelve months rehabilition.

The impact it had on her team mates was phenomenal.  A roller coaster of emotions ranging from slight trepidation and excitement of Brown's long-awaited return, to absolute shock and despair at her knee's repeated demise in the same 24 hours.  A flood of emotions that Melbourne's Coaching staff urgently rushed to manage quickly, and keep the team's outlook positive.

Managing a squad after a pivotal player has been forced to retire for the season due to an injury, is one of the trickiest aspects for coaches and staff to deal with.

Technically, new formations, positions and combinations need to be forged, which with the depth that the current Roar squad carries, isn't too much of a problem.

However dealing with a team, that in a sense is mourning the loss of a crucial piece to their footballing puzzle, as well as dealing with the disappointment of their injured team mate and also letting it affect their own playing confidence is a balance.

Head Coach Belinda Wilson is dealing with the loss of Chapman for the rest of the season by making every player accountable in keeping the team morale positive and stepping up to make the necessary formational changes.

"When one piece is missing from the puzzle, you need to find that piece to fill it," said Wilson.

"And finding that piece comes from within the squad and it takes every player in the squad to fill that space; in training and especially in a game."

She also believes that those closet to Amy, who are struggling with Chapman's absence, need to be quickly helped to refocus on their own football and performances, thereby helping the squad to achieve their goals.

Keeping in mind that those goals are passionately shared by Chapman who is a heavy and welcome influence though her encouragement and continued sideline involvement.

Chapman's background in sports science study has also enabled her to understand the nature of the beast, so to speak. 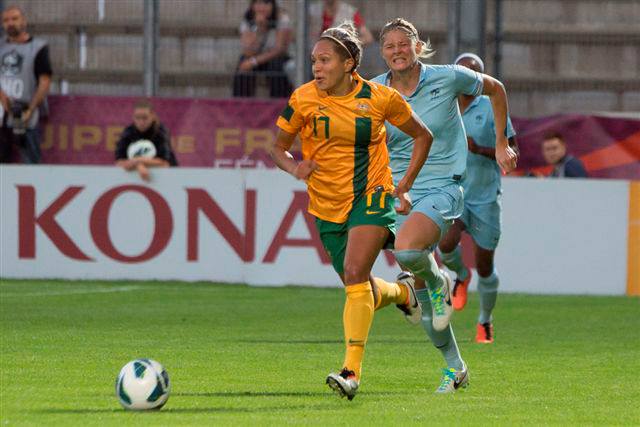 Kyah Simon is another of the Matildas on the sideline

She shares her own opinions on the causes of ACL ruptures but believes that the high prevalence of this debilitating injury has always existed.

It's just that the current W-League and Matildas get much more media coverage now, especially for those players who injure their ACL during season.

Indeed the Australian branch of the "knee club" has existed for many years with some notable long-serving members as is Sarah Walsh, Caitlin Munoz, Kim Carroll and even Chapman herself.

Several published factors such as an increase in tempo to a sudden change of direction, the biomechanics of female athletes (hip to knee weight distribution), genetics, relative strength especially in the hamstrings/quadriceps and even hormones; may all play leading parts in the causes of ACL's in female athletes.

Personally, Chapman can attest to the belief that genetics hold a strong possibility of ACL rupture occurrence, as her twin sister, Georgia (also a professional footballer) has too suffered similar knee problems, as has Amy and Georgia's other siblings.

A popular proposed solution towards helping the cause of prevention, may lie in coaches leaning towards more of a functional style of football conditioning.

Amy, amongst other players, agrees with this proposal, believing that this form of training is more relevant and sport specific and can also help decrease the loading on joints and the heavy repetitive stresses on the body.

Until a proper and thorough study has been conducted by governing bodies and results are found to be close enough to conclusive, all the current coaches and players can do is to try and reduce the stress on their lower limb joints and to rely on the theories and studies of freelance researchers who are dedicated to preventing this disarming injury.

It not only creates a huge life altering impact on the player injured but consequently the whole team, which also has a domino negative affect on the competition and beyond.

Amy Chapman hopes that this ACL rupture will be her last and that in the next 12 months methods will be found quickly to help her and others to prevent it happening again.