Striking teammate Beth England did the damage with a delicious double, but the Matildas captain was invaluable in Chelsea's victory.

Despite suffering poor periods throughout the match and disappointingly failing to convert a golden opportunity on the 67th minute, when through one on one with Arsenal's goalkeeper, Kerr had the last laugh.

Gathering a ball on the wing, Kerr blasted past her opposing marker and her tucked ball into the box eventually set up England, who scored the winner on the 92nd minute.

"Nothing left in the tank!" Kerr exclaimed post-match.

"It's been amazing, the girls have welcomed me here and this is exactly what I came here for, to help the team win trophies.

"There is always going to be pressure and we're always going to put pressure on ourselves. We wanted to win this so badly but now it's just about enjoying tonight. We tried to treat it as a normal game."

Kerr's Matildas teammate Caitlin Foord was also sensational for Arsenal putting in a best on ground performance for her club, but the Gunners were outgunned by the superior striking quality and depth of the Blues.

"Like Beth said, Arsenal were pretty good tonight but we knew what we had to do to win the game," Kerr concluded.

Asked if her Chelsea coach, Emma Hayes, was going to let Kerr celebrate tonight, the Aussie's reaction was priceless. 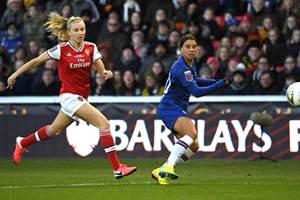 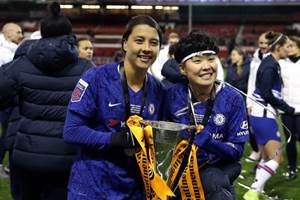 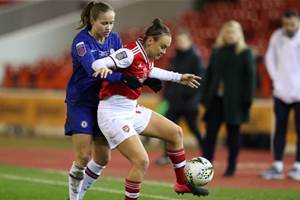 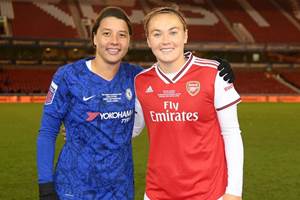 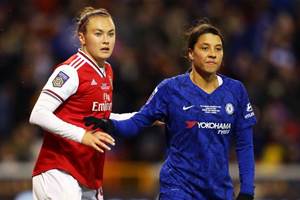