This year's FA Cup had much to celebrate.  Not only was it the 50th anniversary of the Women's trophy, but also marked the 100th anniversary of when women were banned from playing the game in England.  For Australians, it featured four Matildas playing for both sides.

More information on the Women's FA Cup can be found on the FA's website.

The match was played at Wembley in front of 40,942 fans with Chelsea FC displaying a ruthless masterclass to win the Final.  Matildas' Steph Catley and Sam Kerr both started for Arsenal and Chelsea respectively, with Lydia Williams and Caitlin Foord available on the bench for the Gunners.

Despite being two evenly matched teams, Chelsea were the stronger contingent throughout the entirety of the game.  They out played and out shot their North London rivals.  Perhaps the most striking statistic to show the Blues' superiority were Chelsea's eight shots on target to Arsenal's zero.

Chelsea's first goal of the game though came from an unlikely deflection.  In the third minute of play Arsenal defender Lotte Wubben-Moy tried to clear the ball.  However, it deflected right in front of the Gunner's goal and fell directly in the path of Kerr's strike partner Fran Kirby.  She simply picked up the ball and ran straight to goal to score the opener for Chelsea.

From that moment on, the leading side maintained the lead through their stronger play both offensively and defensively.  The absence of Arsenal's defensive rock Leah Williamson was strongly felt, with Chelsea pulling apart the Gunner's back line multiple times throughout the match.

The Blues trio of Kerr, Cuthbert and Kirby ran through Arsenal defence on a number of occasions, requiring goalkeeper Manuela Zinsberger to make a number of important saves.  A number of shots from Kerr and Kirby failed to find the back of the net entirely due to Zinsberger's heroics.

The Gunners were lucky to be only 1-0 down heading into the dressing room at halftime.  While the Gunners did come out stronger in the second half, this was not enough to stop Chelsea from keeping their hold on the game.

It was only a matter of time before Zinsberger's heroics could not make up for Arsenal defensive mistakes and Chelsea's stronger offensive display. A deep pass from Kirby into Arsenal's half in the 58th minute found Kerr who was able to outplay Wubben-Moy and slide the ball into the back of the net.

The 2-0 scoreline did not stop Chelsea's attacking play.  The Blues second goal only seemed to increase their appetite for more, while any second half boost that Arsenal came out of the dressing room with slowly wilted away.

Arsenal head coach Jonas Eindvall did bring on Caitlin Foord in the 70th minute, with the attacker replacing centre-half Jen Beattie.  Steph Catley moved into Beattie's position, Katie McCabe took to left back and Foord took her place up front.

The defensive change was not able to hold back Chelsea.  Kirby's tremendous shot on goal two minutes later hit the post.  Kerr then scored one of the nicest goals in recent Wembley memory.

Getting the ball mid-way through Arsenal's half, she ran up the flank and then chipped Zinsberger to get her brace.

The scoreline ended 3-0 with Chelsea winning not only their third Women's FA Cup, but also their third trophy of the 2020-21 season alongside last season's FA WSL and the League Cup. This is the club's first domestic women's treble.

Kerr became the second Australian woman to score in an FA Cup final alongside Kristy Moore and the second Aussie woman to win the Cup after Matildas' Taryn Rockall's victory with Arsenal in 1999.  Speaking after the match, Kerr did not hold back her joy:

“I think we deserved it. Me and Fran scored but the defence was amazing, it was a team effort and we’ll enjoy this one.

"We felt like we dominated but they defended well in the first half and we couldn’t put away some easy chances so we knew we had to score again to put the game to bed, and we did.

"Arsenal put their bodies on the line but if we kept pushing we knew we’d get the win and at Wembley in front of a massive crowd – it can’t get any better.

"We’ve conceded not many goals in the last few games and scored a bunch – I think we’re the best team in England.” 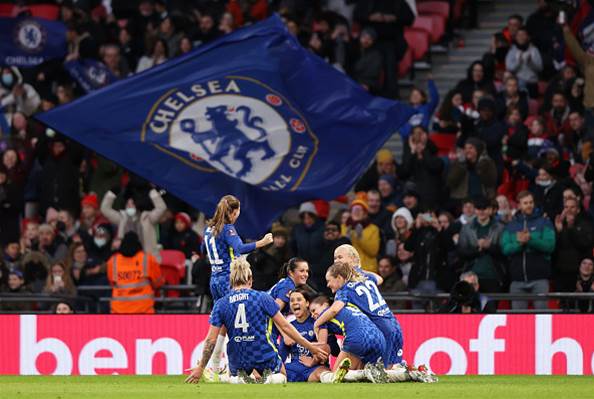 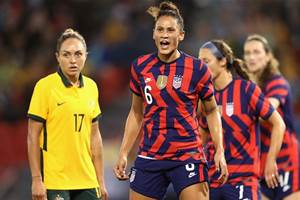