Monday saw the distribution of some of football's most prestigious prizes by France Football, including the Ballon d'Or.  Sam Kerr finished with 46 points in the voting, placing the Australian third overall.

The full ceremony can be viewed on the DAZN YouTube.

While questions about images of Cristiano Ronaldo and Lionel Messi's win over Robert Lewandowski were cause for conversation after the awards, the scheduling of the ceremony during a women's international window had many questioning France Football's approach of the women's game.

Of the twenty women's finalists only six were able to be present at the ceremony. Kerr was unable to attend as she was facing the United States on the other side of the world in Newcastle, New South Wales.  Other important finalists with a possibility of winning the top prize were also absent.

The only women's players who attended for the ceremony were Paris Saint Germain's Ashley Lawrence who was injured and was not abroad with Canada, and Barcelona's Alexia Putellas, Jenni Hermoso, Irene Paredes, Sandra Panõs and Lieke Martens.

The first four Barca players played in a World Cup qualifier for Spain less than 24 hours later while their teammate Martens missed a Netherlands international friendly against Japan to be present.

This has caused many to question whether France Football respects the women's game given that they knowingly chose to schedule the award ceremony during a period where none of their women's finalists were assured to be able to attend.

It is not the first time that the award has been marked by sexist controversy.  In the first year the Ballon d'Or feminine was handed out, winner Ada Hegerberg was asked to twerk by host DJ Martin Solveig after having received the historic inaugural trophy.

Moreover, the current awards nomination and distribution is far from being equal.  The women's Ballon d'Or only has twenty finalists while the men's has thirty finalists.

The men also have three other awards handed out during the ceremony: for best young player under the age of 21, the Kopa Trophy, for best goalkeeper, the Yashin Trophy, and for Best Striker.

No women's equivalent exists for any of these prizes despite the fact that all of these awards were created since the creation of the Ballon d'Or feminine in 2018.  Arguably women's winners could be found for all these categories as well.

The presentation of the women's award was also of lower quality. While the thirty men's Ballon d'Or nominees each had a highlight clip attached when their final position was announced, the women's ranking announcements did not have similar fanfare.

The presenters simply showed with a picture of each nominated women as they had done for the men's other awards.

During a ceremony televised in France and worldwide on DAZN and DAZN YouTube, France Football missed an opportunity with a record viewing audience to show some of the best plays by the women they had shortlisted for their award.

While the Ballon d'Or awards has come a long way since 2017 when women were not even recognized, the promulgation of men's prizes, the downgrading of the women's top prize in comparison to the men's and this year's scheduling shows that France Football still has a long way to go towards equal respect of the women's game.

None of this should take away from Kerr's accomplishment though.

To date she is the only Australian woman to be nominated for the award.  Moreover, she is one of four players alongside France's Wendi Renard, the Netherlands' Lieke Martens and Denmark's Pernille Harder to be nominated every year since the women's award was created.

The Matildas' captain finished fifth in the rankings in 2018 and seventh in 2019.  After the 2020 Ballon D'Or having been cancelled due to the COVID-19 pandemic, this third iteration of the women's prize saw Kerr climb to third.

Kerr equally had an accomplished year though.  She lead the Matildas to their best ever result in a major competition, finishing fourth at the Olympics.  Club-wise Kerr won three trophies, the FA League Cup, FA Community Shield and FA Women's Super League.

Chelsea was able to accomplish this treble in large part due to the 27 club goals Kerr scored in all competitions.  She is on to a roll this season as well, having scored 9 goals in 8 FA WSL games and 4 goals in 4 UEFA Women's Champions League matches.

While this year's Ballon d'Or recognized the Barcelona women, one would not be surprised if Kerr finished with the trophy next year, should she keep up her current prolific form.  If this does occur, let us hope that France Football give her her due respect. 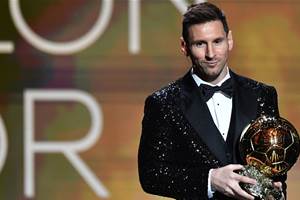 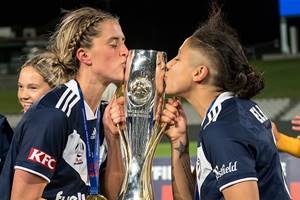 The full report of the Ballon d'Or can be found on France Football's website.