The Matildas wrapped up a sweep of group wins at the Women's Asian Cup with a 2-1 win over Thailand but were infuriated by losing their clean sheet record.

The Matildas were left furious with themselves after giving away a late goal in their 2-1 Women's Asian Cup victory over Thailand - but their anger has delighted coach Tony Gustavsson.

His much-changed side made hard work of their win over a limited and unambitious Thai outfit in Mumbai, with goals from the prolific duo of Emily van Egmond and, inevitably, Sam Kerr assuring them of a clean sweep of group stage victories on Thursday (Friday morning AEDT).

But it was the 94th minute goal they gave away - the first they've conceded in the tournament while racking up 24 goals - that persuades Gustavsson they're in the right frame of mind now they've sealed a quarter-final tie against South Korea.

"I'm happy how upset the team were after the game about the goal they conceded in injury time," said Gustavsson, reflecting on the dazzling volley from outside the box from substitute Nipawan Panyosuk - a goal the defensive Thais had never really looked like scoring all night.

"We'd done a phenomenal job defensively, worked really hard but the players were really upset we couldn't keep that clean sheet - and that says a lot about the mission we're on now.

"Instead of celebrating winning the group, they're upset about that one goal. It says a lot about their mindset."

Gustavsson was also delighted his first two missions had been accomplished - to win Group B with maximum points and to give every player in the 23-strong squad some playing time.

"I wanted to get out of the group with as many players possible available for the playoffs, but also fresh and peaking in form."

The only setback was an injury to forward Holly McNamara, who had to limp off injured in the second-half.

"It's always emotional to see a player going down like that and obviously you worry. I hope she gets well as soon as possible because she's been really good in training," said Gustavsson.

Despite picking a team that gave a nod to the Matildas' future, it was not the young guns but the old hands van Egmond and Kerr, who won the day.

Van Egmond, one of only two starters that remained from the XI who began the 4-0 win over the Philippines on Monday, was the best player on the pitch at the Mumbai Football Arena, even if impressive fellow midfielder Clare Wheeler took the match award.

After the Matildas' young three-pronged strike force had failed to make much impact on the Thais' backline, van Egmond showed them the way with a superb 39th minute strike from just outside the D.

There had also been an impressive display from the sprightly Courtney Vine, who terrorised the Thai defence on the right flank in the first half and proved a decent experimental full-back after the break in Ellie Carpenter's absence.

After van Egmond was rested with 25 minutes left, after her fifth goal of the tournament, captain Kerr was brought on and her totemic presence galvanised the team.

When the Thai keeper Kanchanaporn Saenkhun dropped substitute Kyah Simon's cross in the 79th minute, inevitably Kerr was on hand to nudge the ball almost apologetically into the net.

It was the champion's 56th international goal and her tournament-leading seventh.

South Korea, who had earlier earned a 1-1 draw with Japan which left them second in group C on goal difference, should prove a much tougher test for the Matildas in Sunday's last-eight clash in Pune. 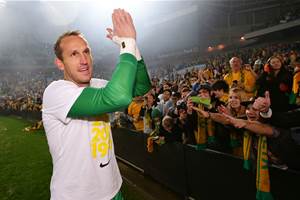 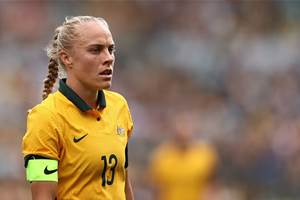