This season, Perth Glory and Melbourne Victory have served up the goods in terms of entertaining football.

The first semi-final for the 2018/2019 season was no different, bringing unparalleled determination from both sides, a pendulum score line and an extra time extravaganze.

Lia Privitelli, who has been a prominent name in the road to finals, was a notable omission not only from the starting XI but also from the bench. In her place was MelindaJ Barbieri, one of the youngsters who began her senior career all those years ago with Victory’s initial rebuild in 2015/2016.

Victory were able to grab and sustain a 1-0 lead in the second minute, with Nairn unleashing a long-range shot that Eliza Campbell was unable to stifle.

Following this, Victory dominated the majority of attacking opportunities, with Ella Mastrantonio, Nairn and Dani Weatherholt able to link up through the midfield and play measured football.

Natasha Dowie was able to keep her cool on many an occasion, wriggling between defenders to find the pass. However, none of this resulted in a goal that could secure them a comfortable lead.

At the other end of the pitch, Victory’s defence were physical and solid. However, with this came some contentious decisions from the referee. See for reference: Kerr being fouled in the box in the 47th minute.

Going into the second half, Perth’s defence were characterised by their determined but sometimes scrappy attitude. Whilst their clears were not always crisp, it was enough to buy them time and space to equalise.

Meanwhile, Victory subbed off goalkeeper Casey Dumont with concussion concerns for Bethany Mason-Jones, who has not had much game time this season.

An absolute standout for Perth was Leticia McKenna. The 16-year-old was able to transform Perth’s attack, bringing work effort up front, holding up the ball and distributing to dangerous goal scorers such as Kerr and Rachel Hill.

A common criticism of the Perth side this season has been their lack of substantial midfield, meaning that their impressive attacking line has been left to transform on the counter. 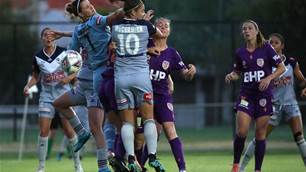