After scoring only 10 goals in Season 8, Perth Glory were writing wrongs in round 1, as they put four past the Western Sydney Wanderers in their season 9 opener.

After scoring only 10 goals in Season 8, Perth Glory were writing wrongs in round 1, as they put four past the Western Sydney Wanderers in their season 9 opener.

The NIB played host, with the Glory Women the main event following the corresponding A League fixture, which ended in a 2-2 draw.

After a frantic start by the home side, the Wanderers were left shell shocked when Caitlin Doeglas fired home the fastest W-League goal in history -and her first goal in the competition - after only 14 seconds.

However, the resilience and desire of former Matilda Jo Burgees paid off, as she clawed one back for her team, before going close again before the half time whistle.

The veteran again showed her class for the away sides equaliser, setting up Helen Petinos for the visitors second.

Fans may have been forgiven for thinking the Glory Women were set for the same fate as their male counterparts, however, captain Sam Kerr pulled her team out of trouble with a second half brace to secure a vital three points for Glory.

Olympian Kerr looked well rested after four weeks off and was clearly delighted with the result.

"To start with a win is massive for us girls.  Not only for our confidence but for team moral, we're really pleased." Kerr said.

"There's heaps of new players, and we're happy with how they've fitted in with the old girls.

We're a lot stronger in places we weren't (last season) and have more strength in depth."

Glory will be hoping to keep Sam Kerr fit, with her last two W-League campaigns being cut short due to injury. After a slip in the warm up, glory fans hearts sank.

"I just went over wrong on my knee but I haven't played in four weeks so that's going to happen. I've got six days to rest up the body and after playing 90 today I'll be right."

In spite of Glory running out 4-2 winners, the wanderers showed a good work ethic and creativity. They managed to play some good football hitting the woodwork on a couple of occasions in search of a third goal.

They kept their heads up and confidence was high, in spite of going down so earlier in the game.

Jo Burgess, Paige Neilson and Helen Petinos we're all stand outs and will hope to capitalise on their good form in the Round 2 Sydney Derby.

With a flurry of new signings, including a new keeper, Glory will be hoping to improve on last season's defensive frailties.

After taking a 2-0 lead, defender Kim Carroll was disappointed to concede and let the Wanderers get a sniff at victory.

"It was disappointing but I guess that's football. We held our own and then scored the third." Carroll said.

With Mackenzie Arnold signing for Brisbane Roar, Melissa Maizel is in between the sticks for Glory in Season 9.

"She's good, she's talking well and fitting in and obviously we have Dal Busco as a back up."

Both teams have tough games up next with Glory at home to Brisbane Roar on Saturday and the Sydney Derby at the Allianz Stadium which will be broadcast live on Fox Sports 505 and ABC TV at 2.30pm on Sunday. 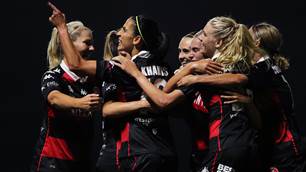