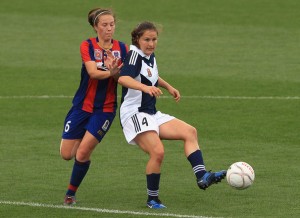 Although renowned for her ability to read the play and break up attacks, as well as her physicality on and off the ball, Fletcher also provides an attacking threat with a solid record of 8 goals in 33 W-League matches for the Victory and former W-League club the Central Coast Mariners.

“Her ability is unquestioned and, having played in the competition before she is well acquainted with the conditions and style of football that is played in Australia meaning that she should be able to slot seamlessly into the United family.”

Fletcher is the third American to sign for Canberra United with Stephanie Ochs, who arrived earlier this week, and Lori Lindsey already set to pull on the green jersey.

The 29 year old joins United after a two year stint with Swedish side Vittsjo in the Damallsvenskan where she scored 4 goals in 37 games.