After a 4-2 home win over the Western Sydney Wanders at the NIB, Perth Glory made their debut at their new home Dorrien Gardens.

After a 4-2 home win over the Western Sydney Wanders at the NIB, Perth Glory made their debut at their new home Dorrien Gardens.

A 659 strong crowd made their voices heard to welcome the team to their new surroundings.  Glory will be hoping to make their new ground a fortress after a difficult Season 8.

With both teams entering Round 2 with wins under their belt, the stage was set for an attacking thriller, which would see the two goalkeepers come out on top.

Melissa Maizel kept her first clean sheet for Perth Glory after an impressive display against an attack minded Roar.

In her first season for Perth, Maizel looked to make a big impression, with former Glory keeper and Matilda, Mackenzie Arnold in goal for the opposition.

Maizel put in a more composed, concentrated and confident display in Round two, saving Glory on numerous occasions, denying the threat of Katrina Gorry and Emily Gielnik repeatedly.  The former Canberra keeper, has forged a successful relationship with the Glory back line, which was crucial to the final score line.

Kim Carroll put in a solid 90 minutes against her former club and lead by example throughout the frantic first half.  Her experience and composure gives the Glory back four assurance, something which was seemingly lacking last season.

Going forward Glory looked as dangerous as ever.  Sam Kerr,  had a personal duel with Mackenzie Arnold with the Roar keeper keeping her at bay, when she looked certain to add to her Season 9 tally.  Internationals, Nicki Stanton and Alyssa Mautz were equally dangerous and demonstrate the fire power Glory possess.

Overall Glory will be happy with their showing as they held their shape well. However, they will be disappointed to not capitalise on the chances they created.

It is clear to see that Perth Glory are a more focused and enthused group than in Season 8.

The moral of the team appears to have lifted and this is being transmitted on the pitch.

"A lot of the distractions we had last season at the club have gone and a lot of the players that were here last season are better for having a season under their belt in the W-League.

Sammy is a good captain and Kim Carroll has stepped up to be a good vice-captain. I think everyone is enjoy each other's company."

Back on the field Despotovski was delighted with the clean sheet.

"The defence is still getting used to how they work as a unit but I think today the whole back four was excellent." He said.

"I'm delighted with the way we played and we created lots of chances and kept our structure well. We deserved more than a draw out of this game but unfortunately we couldn't score the goals.

We targeted four to six points in the first two games so we are half way to where we wanted to be."

After an impressive Roar debut against Sydney FC, Mackenzie Arnold has made a big impact since signing from Glory.

With two games played, the 21 year old Matilda, has only conceded one goal, against two of the most attacking W League sides.

Her good form continued as she denied Sam Kerr on numerous occasions, which is no easy feat.

As always Arnold's positioning, agility and catching were on point and it seemed Glory could have tried all day to get past her with no avail.

Although the Roar had a lot of possession, they lacked a cutting edge that we've come to expect from the Brisbane outfit.

Gorry and Gielnik were causing Glory trouble, however, the Roar threat could have been intensified if they could have beaten the Glory offside trap on more occasions.

After a confidence boosting win over Sydney FC, the away side would have been expected to have more conviction in the final third.

The away side will be disappointed to not capitalise on their impressive round 1 performance.

Captain Clare Polkinghorne said: "I think we were a bit better possession wise but it was a bit of a scrappy game and I think we have a little to improve on for next week."

Roar had numerous chances but lacked their usual conviction.

"We created a lot of opportunities but the quality in the final third was lacking. We just need to make sure we're looking across the line and timing those runs and if we can do that a little bit better we'll cause teams a lot of trouble."

Both games take place on Sunday 20th November in Round 3 of the Westfield W-League. 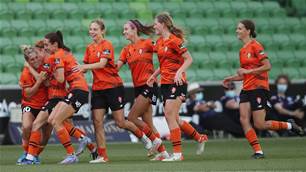