The Newcastle Jets kept alive their hopes of reaching the W-League finals this season, with a 2-1 win over Sydney FC in Campbelltown on Saturday.

First-half goals to Gema Simon and Nicole Bolger saw the Jets take all three points away from Campbelltown Stadium, despite Sydney pulling one back through Renee Rollason in the second half.

The attacking intent of both sides was on show early, with Newcastle spurning multiple chances in the opening minutes through strike star Lisa de Vanna.

De Vanna was one-on-one with Sydney goalkeeper Allison Lipsher on two occasions in the opening two minutes, but failed to capitalise.

Newcastle's persistent attack bore fruit in the 11th minute, when Simon scored from a left-foot strike across Lipsher after being put through by Emily van Egmond.

Sydney's Kyah Simon had the best chance of the first-half for her side, getting on the end of Sarah Walsh's cross at the near post on 32 minutes, but she fired her attempt wide with Jets 'keeper Melissa Barbieri covering the near side.

Bolger doubled the Jets lead five minutes later, beating Lipsher one-on-one, tucking away her strike to the left side of the goal, as Sydney's defence continued to allow an attacking Newcastle behind their last line.

De Vanna then had a spectacular chance to make it three, finding herself in the clear behind the last defender, and her attempted looped shot was kept out by Lipsher, but not before the shot-stopper nearly fumbled over the line.

Sky Blues striker Leena Khamis began the second half with all guns blazing, as she fired a powerful strike at Barbieri, who collected the ball at the second attempt after an initial parry.

Despite their two-goal buffer, the Jets continued to push for a third, with midfielder Linda O'Neill firing wide from a good chance on the left side.

De Vanna had another one-on-one chance which she squandered, but Sydney's Rollason fired into the roof of the net to pull one back for the Sky Blues, after a great layoff pass from Caitlin Foord in the 69th minute.

The goal saw Sydney turn up the heat in attack as they searched for an equaliser, with Danielle Brogan firing wide from a tight angle on the right side on 72 minutes.

Khamis was through on goal in the 84th minute, beating the Jets' Simon but an on-rushing Barbieri was there to maintain her side's advantage in a thrilling finish to the contest.

The win did not elevate Newcastle out of fifth spot, but it moved them to within two points of the fourth-placed Melbourne Victory, and the Jets have a game in hand.

Sydney are likely to still play finals football despite the loss, as they are still two points clear of the Jets. 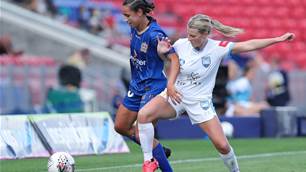