It was the goal that will go down in history.

Down 2-0 in the second half of their final group game, Jamaica was on the hunt for their first FIFA Women’s World Cup goal.

The debutants had seen 10 goals fly into the back of their own net but after over 229 minutes of football, Havana Solaun wrote her name in the history books.

Deciding to move wide of Bunny Shaw after the defenders swarmed the forward, the 26-year-old scored Jamaica’s first ever goal.

Celebrations erupted where Jamaica fans were sitting at the Stade des Alpes while after the game Australian fans joined in on giving the team a standing ovation.

“It meant a lot for me, you see people score goals but it’s a team effort," Solaun said.

Lydia Williams won’t want to see this one back…

Jamaica fans had waited 21 years to see their nation score a goal on footballs biggest stage. Their last goal came at the 1998 men’s World Cup in a 2-1 win over Japan.

Solaun becomes just the third Jamaican to score at a World Cup. However, speaking to press after the game, the Klepp IL midfielder said it was bittersweet.

“I think scoring was a little bit bittersweet, it wasn’t exactly the result we wanted,” she said.

“As a team, we are still super young and I think it is super exciting to think about the potential moving forward.

“Part of this whole journey has been making history and that in itself is exciting.

“There is so much potential moving forward.” 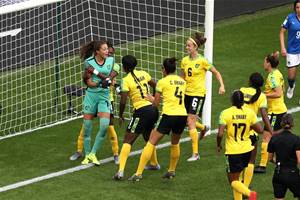 The Reggae Girlz will be leaving a lasting legacy on women's football in Jamaica no matter how their World Cup journey goes.

Teammate and defender Torianna Patterson hopes that the team can continue reaching big stages like the World Cup again.

“I’m proud of this group, the effort we put in and we kept getting better and that's what we want on a stage like this,” she said.

“We need to be on stages like this more often because if we are you’re going to see a lot more greatness from Jamaica.”