Australian swimmer Shayna Jack said she "couldn't breathe" when she heard her sample had tested positive for a prohibited substance.

Writing publically on Sunday night, the 100m freestyle relay swimmer detailed in a two-page letter her feelings and emotions about finding out and also revealed the substance which ASADA's testing picked up.

On July 12, Jack was called into the Swimming Australia head coach's room.

"Unaware of what I was walking into, I was happy and bubbly as always. That all changed when I walked through the door to be told ASADA had called," she wrote.

"My brain instantly went into frantic thoughts, something was wrong, I had never missed a test, it wasn't my time slot, so why would they want me? I sat down, waiting for ASADA to answer my call and then a woman's voice said those haunting words for any athlete: "we have tested your sample and it has come back positive to a prohibited substance".

"I felt my heart break instantaneously. I couldn't breathe to answer her next couple of questions.

"There was nothing I could do at that moment, nothing the people around me could do to help me. I was in complete shock, asking myself how and why is this happening to me."

The substance was Ligandrol, something which is used to help build lean muscle mass and strength for those generally suffering from muscle wastage and osteoporosis.

The substance is completely legal if a person has a prescription but under WADA, the anabolic agent is prohibited at all times.

Jack believes the substance was found in a contaminated supplement.

The 20-year-old also confirmed that while the Australian Team was told of her departure, they weren't informed why.

"I wanted to open up to them and discuss with them what had happened. I felt so vulnerable," Jack said.

"But I knew that they had to focus on themselves and continue to represent Australia without me on the team."

On July 19, her B sample test results came in and while Jack, who reaffirms she did not knowingly take the drug, was hoping it was all a mistake, that didn't happen.

"As I read the results, my brain couldn't even comprehend what I was seeing," she said.

"I had to reread it several times before I felt that same pain and heartache all over again."

Jack has begun fighting to prove her innocence and to find out how this substance came to be in her system. However, deep down she feels as though she shouldn't have to defend her reputation.

"I have never missed a random drug test, and I always have my whereabouts up to date," Jack said.

"In Australia, in a sport like swimming, I feel there is no possible way for an athlete to intentionally take a banned substance and not get caught.

"I get tested approximately every four to six weeks, so why would I take anything banned
and do this to myself? Especially leading up to competition where I could be tested daily.

"Why would I put myself through this anguish and risk jeopardising my career and my
character? I did not and would not cheat and will continue to fight to clear my name." 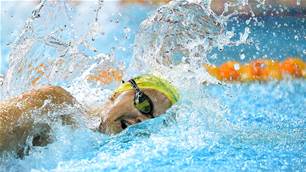