Sabrina Frederick-Traub will be in Brisbane on International Women’s Day (IWD), preparing for her team’s Round 6 game against Collingwood two days later. In a short season where one loss can upend the trajectory of an in-form team like the Lions, it’s a must win for last year’s runners up.

Despite numerous demands placed on the impressive 21-year-old as a vital key-forward and one of the faces of the AFLW, Sabrina says she will find time to reflect upon IWD, a day that serves to highlight disparities women face economically, educationally and politically, as well as celebrating achievements of remarkable women everywhere. Sabrina made it clear her engagement with IWD is very much reflective as well as aspirational. 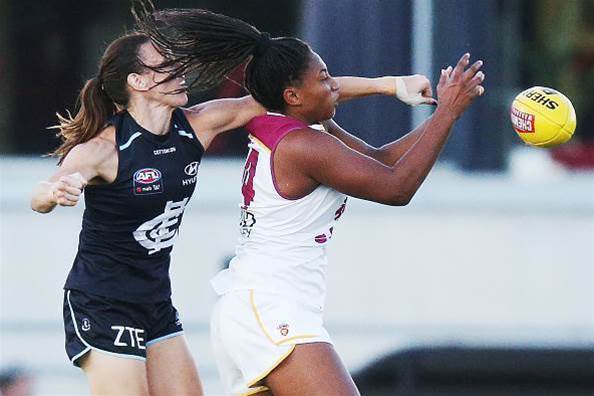 “As much as we would love to say that we’re on an equal stage, obviously it’s not.

"For a female athlete playing in a male dominated sport, it’s important for us that we spend a day to recognise what we have overcome as women and what there still is in front of us.

"To educate people around what it means to be empowered [as] a woman. A day to band together, to prove that we can do things just as well as the men and to call out the imbalances that still remain.”

She’s also no stranger to the experiences of women and girls beyond our shores, as evidenced by recent time in Papua New Guinea helping their women’s team prepare for the International Cup.

“Sport is a massive contributor to bringing people and communities together, regardless of language or religion.

"It bridges gaps...we’re always striving for equality in life, but what’s really important in [achieving] quality of life is to feel like you belong. I’d love to see footy branch out more in other countries.”

While many aspects of Pacific life don’t easily translate back to Australia (riding on the back of a flat-bed ute for example), Sabrina sees some important links.

“Playing the game you feel like you’re a part of something. It’s amazing what it’s doing in other countries [but ultimately] you’re talking about local community as well.

"As much as it is Australia’s game, Australia is a very multicultural country; the game needs to reflect that. I’m heavily involved in the multicultural space outside of the game. It’s a massive passion of mine and I probably will continue to be involved post-playing career.”

I had so much fun celebrating the kick off to the 2018 @nab @aflauskick season in QLD last night! So many smiles were seen , and that is why footy is so great! Go to https://t.co/n1KZLLAoBw to register for this @aflauskick QLD season!#NABAFLAUSKICK pic.twitter.com/AHY77rHTru

This season the AFLW has been targeted over perceived deficiencies as a “product” & revelations that funds hadn’t been allocated for lighting beyond initial games caused concerns.

The Lions have also lost of one of their other key-forwards, Tayla Harris, to rivals Carlton. Are any of these issues a big deal for Sabrina or her club?

“I think the culture at our club is unique; as much as we recognise what’s going on outside, we’re very focused on what we’re about. It’s easy to get caught up in that stuff, it’s not going to contribute to how we’re playing so we shouldn’t take it on-board.

"It’s part of media & we understand that. I’m pretty happy with where we’re sitting. It’s easy as a human being to talk about something negative...it’s a bigger picture, women are playing professional sport and that’s exciting.”

Sabrina’s words convey maturity and purpose beyond her years, perhaps not surprising given how she’s coped with moving halfway across the country at 19.

“Perth to Brisbane was drastic, it happened in a couple of weeks. Knowing you can make a change and it can absolutely pay off, it pushes me to strive for more. To know all that good can come from a massive decision puts me in a good mindset to take opportunities, learn from my mistakes and keep pushing.”

Looking into the future, Sabrina’s excitement for the next batch of talent is palpable.

I had so much fun celebrating the kick off to the 2018 @nab @aflauskick season in QLD last night! So many smiles were seen , and that is why footy is so great! Go to https://t.co/n1KZLLAoBw to register for this @aflauskick QLD season!#NABAFLAUSKICK pic.twitter.com/AHY77rHTru

“You think about the players now that have come across hurdles: being told we can’t play, leaving the sport, not having the right resources. Girls are going to have access to a full blown pathway, [so] I’m excited.

"When I was coming through school, I was torn; you don’t want to invest all of your time into something that has no future. They can actually believe, which is really awesome.”

As for even further down the track?

“In terms of leaving a legacy, it’s important to have a goal in mind for when you do retire. I only want to leave a positive mark, [because] for me football is more than a game, it gave me a lot more than I could ever ask for.

"I honestly just want to do that for others. Being a female athlete and the first to play...that’s going to leave a mark on a lot of people.

"I hope we’re only having a positive impact on little girls coming through. I can remember the athletes that I looked up to and how much they actually made an impact on where I am now.

"Just knowing and recognising how important that is; that’s a legacy I want to leave.”