The story of 36-year-old Collingwood defender Meg Hutchins’ pathway into football is a familiar tale to many young girls who wanted to play footy at the time. It’s also a reminder of how the terrain has improved for women and girls in the sport.

After playing over 50 junior games for Kew, Hutchins’ opportunity to play for her club was effectively cut off at age 11.

“My first reaction to my mum telling me was ‘why?!’ and her response was that the boys didn’t want to tackle me anymore,” she recalled. “But obviously the truth was that there was the rule at the time that prevented me from playing after the age of 11.”

From there, her trail to the AFLW entailed following her football-loving brother around, being a water girl for his club, the University Blues, for 8 years, and “fanatically” watching all of the footy shows. She found football again as a player in her early 20s, introduced by her good friend to the Eastern Devils in the Victorian women’s league where she would play for 16 years.

So about last night... 😁 #FOREVER pic.twitter.com/88D5mHQo9O

Although she laments that the national competition has arrived towards the end of her career, she describes herself as ironically “in the most peak physical condition that I’ve ever been” at age 36. She credits this to being in an elite environment at Collingwood.

Hutchins’ experience also came at a time when she felt that there were few role models in women’s sport for young people.

When she was growing up, she says, “there were little, if any, visible female role models, apart from your absolute stars in the Olympics. They weren’t my sports of choice though. The ones that I aspired to be like were AFL footballers. I always wanted to try and kick a ball like Nathan Buckley and now I get to see him in the hallway, it’s a bit weird.”

But she’s proud of her own status now as a role model, calling it an “awesome responsibility we have, that we can actually be for young girls what we didn’t have.” 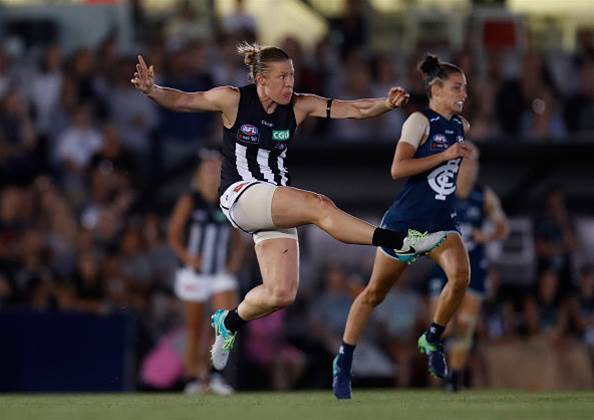 She also had a big hand in Collingwood’s bid to have an AFLW team from its inaugural season, as women’s football operations manager at the club at the time.

“I was probably the only one there who understood women’s footy at that point in time. It was a pretty big responsibility but certainly one that I enjoyed, to educate such a proud and strong club on what women’s footy is all about and what it means to the girls.”

It worked, with Collingwood selected for the inaugural AFLW season. The club repaid Hutchins in turn, drafting her as a priority signing who has now played 10 games for Collingwood. She can see things changing in the league for the better.

“There’s certainly been added interest,” she said. “In year one it was very new and no one really knew what to expect. Now there’s a lot more understanding and buy-in from the men’s program. We had a joint training session recently with the men’s and netball teams. Now we actually have more female teams at Collingwood than male teams, and if you’d told me or anyone that 2 years ago it would have been like ‘you kidding me?!’”

Ultimately though, the best part for Hutchins is that “I don’t have to educate people on women’s footy now. They can see it for themselves and they get it. For me, that’s probably one of the biggest successes. People now see why it’s so important that time and resources and finances are invested in this game.”