GWS Giants Ellie Brush shares her thoughts on the importance of IWD.

“It’s a chance to bring some awareness to the world that women are there to be heard and we’re equal. It gives us a platform to be heard around the discrepancy between wages for men and women. With the two sports I play, we’ve come a long way this year and the last couple of years and we’ve got a lot further to go”, Brush said.

Women and men, young and old all need role models to see what they can achieve and  IWD gives us an opportunity to showcase women in key roles. Brush is one such woman, but who did she look up to?

“I think back to when I was little and Olympians came to talk at school. You were so inspired that’s what you could be.

“On the television there were not that many female sporting role models. The Matildas came along and I think that helped me want to play soccer for my country.

“Seeing Australia play in my own backyard in the 2000 Olympics, seeing the females on TV, that gave me a sense of ‘Oh wow, I can do that’.“

Brush also appreciates the role she is playing in the lives of young sportspeople.

“I certainly feel that with all the kids and families we see watching us, people saying their little girls are so inspired by us, we’re doing such great things.

“That’s really special. If you see it, you can dream it and believe it and achieve it. That’s why it’s so important for women’s sport to be out there in mainstream tv, in everyone’s homes so that little girl can dream those big things the same as her brother can.”

Whilst Brush has had plenty of role models in her sporting so far, she notes that many of them were men. Female role models were fewer and harder to come by but a few stood out to this day.

“I danced as well playing soccer and footy, and all of my coaches there were female. I really looked up to them.

“Then around the 2000 Olympics time, I remember players like Cheryl Salisbury and Tal Karp and other strong and inspiring women who I thank to this day for starting my career.” 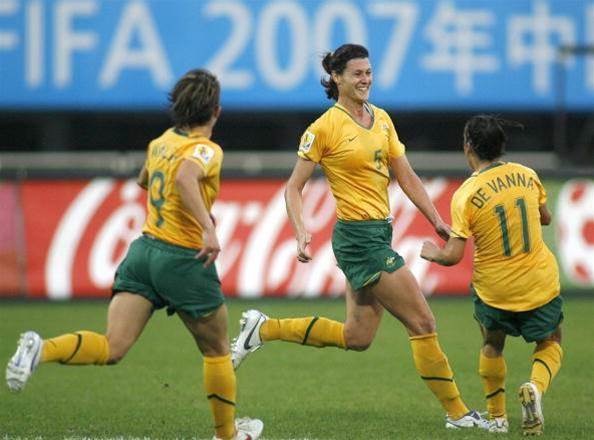 Brush was a late entry into the world of Aussies Rules having never played Auskick but she has always followed footy due to her dad. We cannot underestimate the influence of positive male role models in supporting women.

“He taught me how to kick the football from a young age. He played himself and his family was from Melbourne and had roots in Aussie Rules.

“I never really thought girls played footy and so I played soccer. Then I paid a lot of interest to it with the exhibition game and heard about the AFLW starting up.

“I was still a soccer player but I put my hand up like a challenge and went to a talent search day that the AFL put on around the country.

“I must have done ok and I got an email from the coach of the Giants last year when I was playing with Houston Dash overseas asking would I like to be one of the rookies for the Giants.

“I put both hands up and that’s how I got involved. So my first game of AFL was round 2 against Carlton at Ikon Park last year.”

In its second season, AFLW has been lauded by many but will it achieve the longevity that the W-League has achieved with its 10th season just having wrapped up? Where will AFLW be in eight more years?

“AFLW has started from a much stronger place than where the W-League started partly off the back of support from AFL.

"They put so much into the inaugural season. Next year they’re bringing in two extra teams and the year after that another four teams.

“I’d like to think in eight years women will be fully professional.”