“I’ve been playing footy for a long time”, the 22-year old tells The Women’s Game. She’s one of the few players who has had the chance to play footy, uninterrupted, from Auskick to AFLW.

After Auskick in primary school, Keryk played for six years at her local club, Aberfeldie, but found herself in an all too familiar position for female footballers.

“When I was 14 I was too old to keep playing with the boys so I stopped playing and I was going to probably give up footy because I didn’t really know much about the youth girls competitions that were starting up at the time.”

Thanks to a friend, Keryk found out there were under 16s try outs for a state team. She got in and now her CV boasts state representation at under 16s and 18s level, captaining Victoria for two years and playing in the women’s exhibition matches.

She was drafted to Carlton from Melbourne University, where she’s played for the last four years.

“I’m very grateful that, you know, I’m only 22 now and I’ve got my whole career ahead of me as this AFLW competition’s developing,” she said. 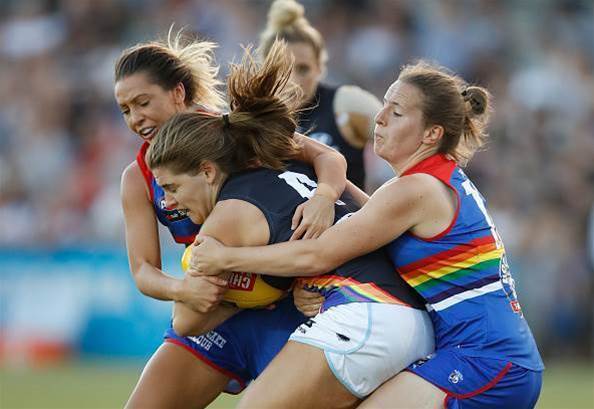 While the timing of her footy career and the broader women’s footy movement have synced up almost perfectly, she has still felt the otherness of being a girl who loved footy.

She was nearly always the only girl in a boys team at Aberfeldie. Thankfully, this didn’t present an issue for her or her teammates.

“I’ve heard stories about other girls who didn’t have the same experience but they were always really good to me. I suppose I wasn’t too bad at footy so that made it a bit better, it might have been different if I wasn’t getting a kick”, she jokes.

During that time, a girl in the boy’s league was a rare sight: “I didn’t know any other girls that played football apart from one other girl who played with me for two years before she went and did umpiring. I just had no knowledge of other girls playing footy much.”

It wasn’t just a lack of other footy loving girls but of representation at the highest level: “I didn’t have anyone running around on TV that I could look up to.”

Luckily, she had a pretty great female role model right at home in the form of her mum.

“Growing up she’s been a great support the whole way through and never told me there was anything I couldn’t do. I didn’t have a concept really that I couldn’t play football because I was a girl because I hadn’t grown up being taught that. I always thought that I’d be able to do anything that I set my mind to so I’m really grateful to have always had that support.”

That Keryk is now a role model for others is a fact not lost on her.

“I think automatically by being a part of the AFLW, you become part of that and young girls are going to look up to you as a role model and it’s really good that they have those strong, fit, healthy role models to look up to.”

Being a role model is just one aspect of what connects AFLW to International Women’s day in Keryk’s mind: “I think AFL Women’s is a really nice celebration of all the things international women’s day [represents]. You know, women breaking down stereotypes and female athletes putting a positive image in the media as opposed to some of the other images that are often put out there.”

Being a public figure and assuming the role model tag comes with a certain level of responsibility, but it is not something Keryk thinks about consciously.

“I suppose the aspect of it I do think about is because I am in the public, I get an opportunity to use my voice and have people listen to me and really make the most of that and to spread some good positive messages.”

One such area where she uses her platform is through her ambassador work for Our Watch – an organisation aimed at preventing violence against women and children.

​“Equality is an area I’m really passionate about so having that opportunity that I got through playing for Carlton has been awesome. To get involved in something like that is really meaningful and a great benefit of being able to play football is that I get to have a voice and raise awareness for those issues.”

While she’s only at the beginning of her career, she has one eye on the future and the inevitable equality

“It’s great the boys and the girls in primary school, they’re not going to know any different, that girls didn’t play AFL before. They are just going to grow up knowing that both boys and girls run out on their TV, playing footy and they get just as excited.

“They can really see themselves in the future doing that so it’s just good to know that opportunity, if that’s what they want to do, is there.”