As the AFLW season came to an abrupt end due to the coronavirus pandemic, GWS Giants young star midfielder Alyce Parker took time away from her farm to share thoughts on another stellar season, the club, and who has impacted her journey.

It’s only been two years and Parker has taken the competition by storm with her high calibre weekly performances and is among the best AFLW talent.

In her second season, she has had a disposal efficiency of 61 percent and averaged 21 disposals, up from last year’s season average of 16. Without her the GWS Giants midfield would certainly not have functioned the way it did in 2020.

But Parker attributes much of her performance to the support and efforts of the people around her at GWS, particularly as she’s so far from home during the season.

“It has been a good year, not just for me but for our club as well. The ability I have been able to perform over both seasons is a credit to the people around me. When I was first drafted to the Giants, our Vice Captain Alicia Eva was actually my coach the year before.

Transition from having your head coach to a teammate gives me pretty good instruction and guidance not only on the field, but off the field, too. I think all the support staff, the coaches and everyone around the club have really taken me under their arm.

Obviously, I have moved a long way from home and the way they have supported me on and off the field, makes me feel, one, comfortable in Sydney and two, the confidence booster to play my own game.”

To play tennis pre-game this season has been key for Parker and teammate Pepa Randall.

“We both get nervous and overthink before the game, so yes we both love tennis and we thought about how for 15 minutes in the warm up, we jump out on the field we are playing on and have a bat with the racquet, and it worked a treat. It’s good fun, it gets us laughing and smiling and having fun before the game really calms you down.”

Throughout the season, the Giants constantly improved and played in their first finals series, Parker explained her thoughts on how her Giants have grown as a team.

“We had a disappointing end to our season, but we can wipe that off the board and look at our results and the way we were shaping our game and a good measure of that was how we feel as a team.

The way we were bonding and feeling as a team, I guess putting that into play and executing it so having that confidence coming off from the season is something you take with you in the offseason and then going into preseason obviously look to continue to grow from where we finished off.”

Parker discussed how former coach and now teammate Eva has impacted her.

“Alicia, she has been huge for me and her impact on me started a long time before I was drafted. She moved up to Sydney and took the reins of head coach at the New South Wales under-18s RAM’s side.

My first meeting with her, you could tell straight away she knew what she was doing, and she had huge recognition and respect as a female coach. And she is a huge part of the reason why I wanted to take the pathway to the AFLW and she helped me to develop and get to that level to be drafted. I think when I got named number three and being her locker buddy, and that shows she has been with me the entire journey and she will continue that in the future.

And for me to say that someone like her has had such an impact on me as a person and a footballer and the reason why I have made a lot of decisions and being able to perform the way I have is really special to find someone like that on my journey.”

Another person who has hugely influenced Parker is former Giants captain Amanda Farrugia.

“It was very sad to see her go, but her and I both knew when the decision was made that our relationship was never going to end there. It has actually gone the complete opposite way, we are probably closer now than we have been as she knew how much I respected her and in the future I would like to follow a lot of her footsteps not only in the footballing space, but her as a person.

She has definitely taken me under her wing this year and helped with leadership, but I’d like to call it mentoring. But she has also become a great friend. I am really thankful to be still involved with Fridgey in the way she is influencing me.”

Parker came sixth in the AFL Coaches Association AFLW Champion Player of the Year, up there with the competition's best in Jasmine Garner, Jaimee Lambert and Maddie Prespakis.

“It’s an honour to be recognised alongside these types of girls, the pioneers of our competition at this point of time. Every time you watch a game, these names pop up and for me to be recognised throughout the season is a reward for all my hard work.

And I guess it shows that all the work I have done over the last 12 months has really developed me as a footballer and I am really happy to be where I am and looking forward to where I can take this in the future.”

To finish up, we spoke of how she is dealing with the current health crisis.

“Yes, it’s weird times and for some people it’s extremely difficult times. I am still quite young in my life and I have never experienced anything quite like this, like most people in the world. For me, most of us have gone back home, so I have gone back to the family home in Holbrook. Being at home it’s special, but it’s two months too early. My family are going ok on the farm and keeping it as normal as we can.” 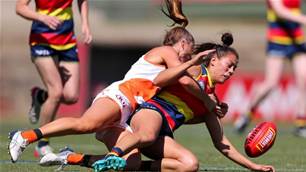