Heyman leading the lines for the Mariners | (Credit: Cam Wheeler)

Heyman leading the lines for the Mariners | (Credit: Cam Wheeler)

She's the hottest striker in the League at the moment.  10 goals in 8 games including a hattrick in Round 7 followed up by a brace in Round 8.

Central Coast striker Michelle Heyman has not had it easy and you get the feeling that it has made the success all the sweeter.

Heyman netted the 200th goal in the W League this season and surpassed Leena Khamis' season one haul of 8.  With their finals berth secured the next mission for the Mariners front woman is to take her side all the way to the W-League title.

Well Michelle you are definitely the lady of the moment and looks like you are in the best football form of your life.  Is that what it feels like?

It does feel like that.  I’m pretty pleased with the way the whole team is going this season.  That I can cap it off with 10 goals, I am pretty happy with that.

It must be the greatest feeling to be playing well in a team that is succeeding?

I am really happy to be playing because of my team.  All the girls get along really well and that is the main thing about it.  I am having fun especially with the team.

You were with Sydney FC last season but didn’t get that many opportunities with the strong squad they had.  How did the transfer to Central Coast come about?

I play for the Illawarra Stingrays down in Wollongong.  Stephen our coach came down to support our games and to try and find new players.  He knew me but I didn’t get a chance to play for Central Coast last year so I was happy to play for them this year.  I am glad that I swapped over and played for the Mariners.

Was it difficult to put the disappointment of not getting much game time in season one behind you and re-focus?

It was sort of.  I wasn’t too sure if I would be starting this season because of what happened last season.  Steve gave me the opportunity to start so I didn’t want to let him down.

Other team members have mentioned that there was a good vibe during pre-season and it felt like the team could do something special.  Did you have that feeling?

Yeah.  All the girls are wonderful and everyone is just happy to be at training and they get along so well.  It’s a great team to play for.

Who at the club has helped you in your evolution as a footballer?

Our captain Caitlin Cooper has been a source inspiration for me.  She has helped me out this year and even last year when I was playing for the Illawarra Stingrays.

Last season I wasn't too sure if I was going to play this year and she pushed me to come and play in the W League.  She has helped me a lot this season and I am grateful for it.  Without her I wouldn't be playing in the League.

The Mariners appear to play a really attacking style of football.  Is that how you planned to set up in the pre-season?

Yes, we are more of an attacking side especially through the midfield with Kendall Fletcher and Lydia Vandenberg coming through from America. They have helped us a lot the American girls. They very talented and they have shown us a new way of playing.

What have you learnt from the girls around you?

This year I thought I better put 110% in each week and the experienced girls talk to me a lot more.  Where I can do better.  What I can do to make my runs a lot easier and not to waste my energy during the game.  With the experience of the girls having played at higher levels, it has just helped me a lot and I have learnt so much this year.

How has Stephen Roach improved your game?

He has taught how to wait for the right moment and the right runs.  I used do a lot of silly runs and waste a too much energy during the games.  He has helped me with my ball control and how to read the game better.

Have you always played football?

I started when I was 11 but before that I played Rugby Union and touch football through school.

Are you now looking at football as a career pathway?

What have you enjoyed the most about this season?

Everything! Even the training has been fun.  Last season I wasn't too keen on the training because I wasn’t as fit.  This season I think it is just that the girls are so close almost like a family that it has helped a lot this year.

Brisbane Roar are the benchmark team that you have to knock off.  Where can the Mariners improve to challenge them?

We can improve a bit more around our squad.  We have been training hard on improving on our touches and passing.  As long as we get that under control I think we can win.

Hopefully if we can keep improving we can make the grand final and settle who are the champions. 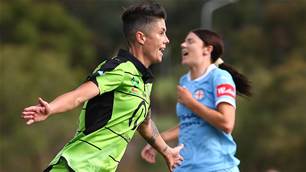