Enza Barilla might be a quiet achiever, but the 24 year old Melbourne native is one of the most experienced players on the Melbourne Victory team notching up her 60th game this round, second only to ex Victory player Steph Catley.

Enza Barilla might be a quiet achiever, but the 24 year old Melbourne native is one of the most experienced players on the Melbourne Victory team notching up her 60th game this round, second only to ex Victory player Steph Catley.

I’ve been playing now for about 16 years. My dad helped me get involved and I started off playing for a boys team for about six years. That was something different but I really think that it helped me out, and turned me into the player that I am today. Playing with the boys and being the only girl in that team. The physicality helped me.

From Under 13 I had to move on and play with a girls team at my local club, Bundoora. Then a couple of years at Keilor and back with Bundoora again which is kind of like home. It was a bit of a shock and disappointing to see that they didn’t get the licence (WNPL) but at the moment my focus is on Victory and the W-League.

If Bundoora were in the WNPL I would have stayed with them for the WNPL next season but I will be playing with Keilor United.

You are still so young, you’ve been around football for such a long time and you’re one of Melbourne Victory’s most experienced players. How do you stay excited about football, particularly at the moment with a tough season as it has been so far?

The W-League first came in when I was in Year 12 and it was the biggest thing that had happened in football for Australia. I was so excited to be a part of it and I just loved it and loved playing.

That’s my aim every year, to play for Melbourne Victory in the W-League. Last year I had a bit of a break due to work commitments and not being able to commit. Little breaks like that make you realise how much you miss it.

Football is just a part of me now and a part of my life and I’m just accustomed to it. When the day come when I’m not playing, I don’t know what I’m going to do with myself.

Unfortunately sometimes it takes an injury or something like that just to remind you how much soccer means to you but I already know and appreciate that it’s such a big part of my life.

Who have been the most influential people or coaches in your football career?

At Epping City in the boys team there was a guy called “Totts”, Tony De Marco. He was my coach for about six years and he played a big big role and then I’ve had some fantastic coaches throughout.

Obviously Mark [Torcaso] has played a big role at Bundoora. He’s also a great friend now which is a bonus. Bobby McGuinness is a great coach and I have a lot of respect for him as well as Ian Williamson.

Dave [Edmondson] is fantastic, Mike Mulvey was a fantastic coach as well. Each coach brings something different and you want them to bring in new ideas, new ways of teaching.

Vicki Linton coached me for a few years and she’s actually a great coach. Kat’s [Smith, Melbourne Victory assistant coach] great. She has played the game, and it’s good that she’s involved and I would love to see her one day become the head coach. It would be good for female football and I just think we need to get more females into coaching and actually coach at a high level.

Coming up to your 60th W-League match, how have you maintained your longevity in the W-League?

Setting yourself goals and targets. I want to be part of it for as long as I can and every year I’ve enjoyed it. Obviously the team changes but the girls who are coming through, we just jell together and friendships form.

You go through that journey with those girls and it’s just something that carries through forever. 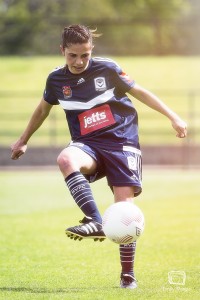 You didn’t play last season. What was your inspiration or motivation for making a comeback?

Last year was a tough one. I really couldn’t afford to give up work or lose my job. So I had to make that decision. When that first game comes around and all of the hype, [not being there] kind of hurt a little and it was part of the motivation to come back because you know you don’t really miss until something until it’s gone or taken away from you.

It was good last year. Joe [Montemurro] was very understanding. He let me come down and train when I could so I was still down there training. Doing that as well really wanted me to play next year and give it all I had.

What is the biggest improvement for the team since Round 1?

Seeing these young girls Mindy [MelindaJ Barbieri], Annabel [Martin], obviously the twins [Melissa and Adriana Taranto] not only getting game time but also building themselves and developing each game. Getting more confident.

You have Mindy who is a 15 year old and she’s getting that confidence. She’s taking on players that might be five or six years ahead of her.

Then you’ve got Annabel who is just growing each and every game and she’s playing  against some of the best wingers in the league.

You know that these girls are going to be in the W-League for the next so many years and that’s exciting to watch.

Then there’s Christine [Nairn] and the internationals, they’re really a class above. She [Christine] is something special.

It’s been a tough start to the current season for Victory. How is the mood in the team?

After the game on the weekend a few of the girls pulled everyone in and we just had a chat because we really needed to regroup as a team.

We know that we’re better than the results at the moment. Unfortunately a few errors and mistakes have led to silly goals. It’s not easy going down in a game early on but it’s something that comes with the game. You win, you lose. The real test is knowing that it can be turned around. It’s a real test of our character and of the team.

If you’re not having the best game or touch or the pass isn’t there, we really want the girls to work, because that’s something you can control.

If you’re having a bad touch, that’s going to happen, but if you can control your work rate - give it your all and you’re exhausted. then you’ve done your part.

What is different for your role this season at Victory compared to other seasons, particularly given your experience and the young squad?

Being the young one, in your first year, you have people to look up to and talk to. Bubs [Melissa Barbieri] and Tal [Karp] really played a big role for me and now it’s changed a bit and I’m in that position.

Over the years now I can talk to the players and say you know what, yep look, today was tough - 4-0, a loss, but it’s not the end of the world.

Unfortunately it’s a short season so we don’t have that much time. Every game does count but you’ve just got to tell the girls, we can do this and just to believe in themselves. Four losses can have an impact on the girls, but we just need to know that we’re better than that. That belief can change a game.

Given the experience and knowledge you’re sharing, what are you learning from the younger players?

They are unreal. At that age they're playing beyond their years. For me it’s so good to see these girls. They’ve come through the program [NTC]. They’re competing against players that are representing their country.

It’s kind of like you become a motherly figure to say that it’s really good to see these younger girls develop.

Our job is to help them along the way but really they’re doing it by themselves at such a young age.

What are the goals for the team this season? Have they changed since Round 1 given the tough start? Are they result based or learning based?

A bit of both. Definitely our goal is to make top four. We still want to do that. We know we need to change things pretty quickly and we do need to get some results now and get three points.

In a few of those games, if one or two things went differently we could have grabbed a point. It’s definitely achievable but it’s a learning thing. Every game offers a new challenge.

There was a noticeable somber mood on the field after the game against Adelaide. What is the team doing to stay focused and upbeat?

The mood of losing is not great. You start putting your head down and start losing belief but it was good to see those more experienced players, Bubs and Christine, really pulling the girls together and just having a chat and we needed to regroup.

It’s kind of a wake up call as well. This is our goal, this is what we can do, and having the coaching staff on board, we’ve all really come together and we just really want to perform now and get the results that we know we can get.

The mood at training, doesn’t it reflect that?

Who are the biggest young influencers/leaders in the team?

They all have that potential to become captain potentially in the coming years. At training they’re saying “come on, we’ve got to fix this”. A couple of years ago you wouldn’t have a 15 year old girl saying that.

They have that courage to say, “I want it played at my feet”. They’ve got confidence in themselves and they’re going to be real leaders in the future.

Unfortunately we haven’t had the starts this season that we wanted but I really think that we just need to get that win and from there, everything else will flow.