Hooker is an exciting addition to the WCE, recruited from their cross-town rivals Fremantle Dockers after a few exemplary seasons.

With experience within the leadership group at Freo, the accomplished player was an obvious choice for vice captaincy in the Eagle’s inaugural team.

Hooker will be an exciting player to watch in this new season of AFLW and will no doubt be an outstanding source of experience and maturity who will help launch the expansion club into the competition.

A fierce forward who has missed out on playing in the AFLW since 2017 is now training hard to prove herself for the West Coast Eagles. She joined the club after a successful 2019 WAWFL season where she contributed in a big way, kicking 10 goals for Subiaco.

Her captain says that it has been fantastic to see the enthusiasm and maturity demonstrated by Devlyn in preseason training so far.

“I think it is a really positive sign and I’m really excited to see what [Devlyn] brings over the next couple of months.”

There are two new players on West Coast’s list that fans are particularly intrigued to see in action. Our latest imports from Ireland, sisters Grace and Niamh Kelly, have been working on translating their skills from Gaelic football to Aussie Rules throughout the preseason.

The two teachers are the latest in a number of successful Irish cross-code athletes giving Aussie Rules a go.

In fact, no less than 18 Irish stars have been recruited to AFLW lists for the 2020 season, four of whom (including the Kelly sisters) play in the Ladies Gaelic Football Association for County Mayo.

Eagles captain Emma Swanson is enthusiastic about code-switching athletes and is excited to see Grace and Niamh in action when the season starts. She hopes that the AFLW can continue to support the inclusion of cross-code athletes in the league for as long as possible.

“I love playing alongside and against athletes that have come from other sports,” she says.

“Their spatial awareness, their game sense and their elite behaviours when they’ve come from a national or international sport only benefit all of us.” 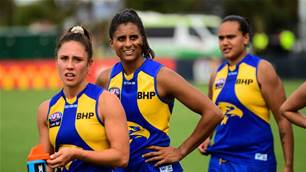