In front of record crowd of 53,034 at Adelaide Oval, the Crows lifted their second AFL Women's Premiership.

However, it was also a bittersweet moment.

Despite an early goal from the Blues, the Crows were efficient going forward and were able to slot three home in the first quarter.

The second quarter was much the same as the first with Carlton unable to stop the home sides forwards. It also produced one of the best plays in the game with Chloe Scheer taking a big mark before Danielle Potter grabbed her first.

Unfortunately, not long after that fabulous passage of play, Scheer was helped from the field after falling on her knee.

It was a concern for Crows after the 19-year-old did her ACL in 2017 and missed the 2018 season through rehab.

The club wouldn't confirm at halftime if Scheer had suffered another ACL injury but she was sent for scans.

The injuries kept coming and this time a clash between Brianna Davey and Tayla Harris saw the later come from the field to receive treatment.

Erin Phillips had been a standout for the Crows all day but hearts broke around Adelaide Oval when she went down holding her left knee.

The 33-year-old AFLW star and Best and Fairest favourite scored two goals and led the game with 18 possessions before being taken from the field to a resounding appulse.

Incredible respect from both teams and the crowd as Erin Phillips gets taken off the field. 💛#AFLWGF pic.twitter.com/ql50X7BabF

The Crows continued to dominate the remainder of the third term but the four quarter was relatively slow with both sides only managing to score a behind each.

In the post-match interview with Phillips on FoxSports, she confirmed that she has suffered an ACL injury "on her good leg" but wants to play on.

"The girls played terrific today but it breaks all our hearts to see Chloe and Erin just go down," Chelsea Randall said.

"We finished that one off for them today." 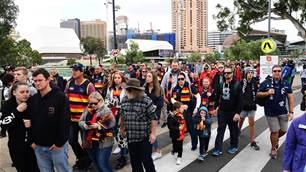