Wallaroos centre Ariana Hira-Herangi was one of four new faces in the starting XV in Australia's win over Japan.

The 23-year-old is part of a squad which is in a period of change leading into the 2021 World Cup.

Hira-Herangi started her rugby journey as a five-year-old in Western Australia before moving back to New Zealand for her schooling years.

However, it was during those years that the Super W RugbyWA player earnt a spot in the development squad for the NZ Rugby Sevens team and had the Olympics in her sights.

Her debut was an emotional

"The feeling is quite unreal, it doesn't really hit you until you're in the tunnel," Hira-Herangi said.

During her debut, she also scored a try after a quick tap from halfback Cobie-Jane Morgan after a penalty saw Hira-Herangi give the Wallaroos a 12-0 lead before the break.

She couldn't believe that she had crossed the line.

"It was quite an emotional experience for me because I felt the passion from the girls, once I was over, and that's what really got me and I felt all of that."

Plying her trade in Western Australia, Hira-Herangi is hoping to inspire the next generation of rugby players in the state.

"Coming from the West I know our opportunities are not as great but with Dwyane [Nestor] being in Perth that it has broadened the horizons and opportunities of being able to make the Wallaroos so I'm hoping that I and the Westies set a solid foundation for the girls up and coming to follow in our footsteps," she said.

The Wallaroos will play in their second Test match against Japan on Friday night at North Sydney Oval. 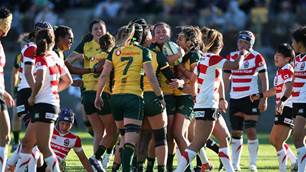