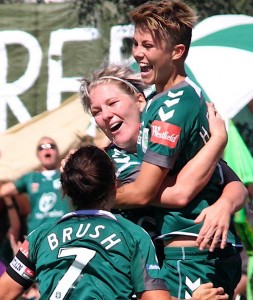 Golden Boot winner Michelle Heyman will be back in green for Season 5 of the Westfield W-League after signing a new deal that commits her to Canberra United for the 2012/13 season.

Speculation had been rife over the future of the league’s all-time leading goal scorer and the champions are therefore delighted to have Heyman back in their ranks.

“That was to be expected as she is hot property within the competition. We were confident though that the chance for her to work with Jitka Klimkova and the team again this season would be enough of a carrot for her to sign a new deal. The squad is coming together nicely and having Michelle as its spearhead stands us in good stead.”

Heyman claimed the Westfield W-League Golden Boot last season for the second time in her career with fifteen goals being a new league high for the twelve round season.

The former Central Coast Mariners striker, and Julie Dolan Medallist for Westfield W-League Player of the Year in 2009, grabbed a double on the opening day victory over Adelaide United last season and didn’t let up from there.

A semi-final match-winner against Melbourne Victory was followed by a brace in the epic 3-2 Grand Final win over Brisbane Roar as Heyman staked her claim for player of the match honours. Her tally of 15 goals took her to 20 goals in 22 games for the club and 31 overall in the Westfield W-League.

National team coach Tom Sermanni noted her undeniable goal scoring talent and selected Heyman for the full Matildas side, as a 73rd minute substitute, in a 2-2 draw with DPR Korea in Brisbane in 2010.

Since then Heyman has made five further appearances for the national team, scoring her first goals at that level in the defeat of Thailand in September 2011. True to form, Heyman struck twice for the Matildas in that fixture.

Heyman was delighted to be coming back to Canberra.

“It’s fantastic to be able to sign a new deal for Canberra United and I am really looking forward to the 2012/13 season,” she said.

“Jitka is a great coach to work with and I am certain that with the squad evolving naturally we will be highly competitive once more and look to challenge for the title.”