The Irish recruits were not the only ones with a point to prove in the first match of the season.

Chloe Molloy, star of Collingwood’s AFLW list in 2018, was unfortunately benched for the entirety of the 2019 season due to a serious Lisfranc injury.

She was clearly ecstatic to be rejoining her squad on the field and celebrated by kicking Collingwood’s first goal of the year.

She maintained a strong presence throughout the game, ensuring her recognition as being one to watch this season.

Prized Dockers defector Dana Hooker has also demonstrated that she is settling into the 2020 season as a key figure in the WCE squad.

Hooker made her statement early on, kicking the inaugural goal for her new club in the first five minutes of the game.

The Eagles’ vice-captain rounded this out nicely with an impressive eighteen disposals and four tackles, matching the efforts of skipper Emma Swanson.

WCE debutante Mikayla Bowen was another who impressed on the field on Sunday.

In an outstanding introduction to the AFLW, Bowen made a strong defensive impact by laying ten tackles, the most of any other player on the field.

Nicknamed ‘The History Maker’ thanks to her efforts for Swan Districts in the WAWFL, it seems as though she’s gearing up to be a valuable member of the foundation team in 2020. 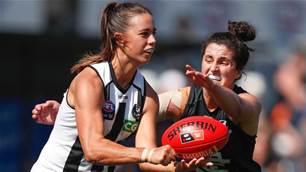