Crawford, who retired after the 2012/13 season becomes the latest Newcastle bred player to come out of retirement to provide much needed experience and leadership.

“I have been enjoying my football in the Sydney competition with the MacArthur Rams and it made me think I am a long time retired and should continue playing while I can,” said Crawford.

“With the team missing several experienced defenders due to injury and relocation, Pete (McGuinness) called and asked the possibility of me returning as he knows I love the game and feel like I can still compete at this level so I decided to come back and hopefully help the team to play finals football.”

The 30 year old provides McGuiness options in the midfield or defence and joins a squad already infused with Newcastle talent including Emily van Egmond, Tara Andrews and Amber Neilson.

The further additions of Copus-Brown, Davis, MacIntyre, Nenadovic and Wheeler are consistent with Northern NSW Football's quest to provide a pathway to the national stage for young players of the Hunter region.

The latest signings take the Jets' roster to 15 of a possible 20 members with three internationals spots still remaining. 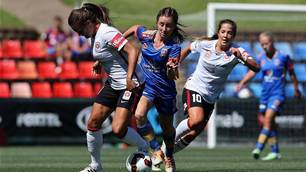