For the leader of the Greater Western Sydney Giants, season two of the AFLW has ultimately been one of disappointment.

Amanda Farrugia, affectionately known as ‘Fridge’, has experienced first hand the tremendous rise from a wooden spoon to just a solitary win away from the Grand Final in just 12 months. But it’s not enough.

Say hello to #18 AMANDA FARRUGIA ✨ Captain of the GIANTS 😀 Position: Defender 💪 Amanda led the inaugural side in the 2017 NAB AFL Women's Competition and was reappointed for 2018! ☝️ FUN FACT: Amanda only took up footy in recent years when she was looking for a new sport to keep her active 🙌 #NeverSurrender #AFLW

“We’re pretty disappointed. I mean you can reflect back and make statements and draw conclusions that the Giants have vastly improved from last year and that might be the case, but comparing seasons is totally irrelevant."

"We really thought we deserved a Grand Final spot, but it just didn’t come our way.”

To be so hungry for the ultimate success after a universally lauded sophomore season gives an insight into Amanda’s passion. An uncompromising captain who leads by example, the Sydney local knows the Giants have the ability to take on all comers and expect to challenge for victory. 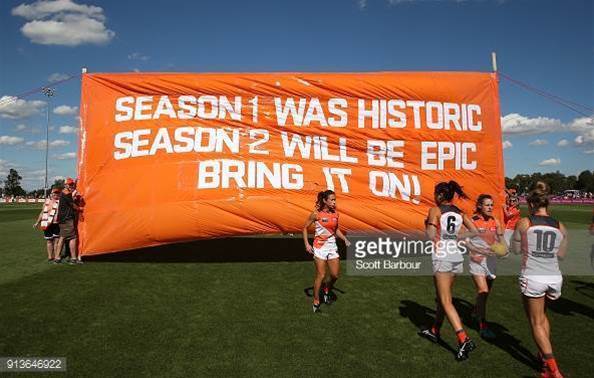 The AFLW off-season looms as long for Farrugia. Despite some of her teammates from interstate electing to return to familiar surrounds, she’d like it if others who may be wavering decide to stick around.

“Some are moving to other states to shake things up a bit, freshen up, get a bit of a different feel for things in another league; everyone has plans in the pipeline.

"I’m hoping some of the interstate girls stay in Sydney and come and play for Macquarie University...I think they’ll do great things for my local footy team.”

Who can blame her? With outstanding additions to the GWS list such as Irish multi-code sensation Cora Staunton, tenacious Croweater Courtney Gum and defensive specialist Tanya Hetherington, Amanda is spoilt for choice.

It is these three players, with an average age of 35 when they arrived at Blacktown this season, that Farrugia commends for the way the Giants turned their fortunes around.

“I think the most impressive people in our team have been the ones who were overlooked, in the inaugural draft and are actually over 30.

"For our team it’s the older players that have had the most impact. The older girls, with the least experience.

People like Courtney Gum, Cora Staunton and Tanya Hetherington have been serious highlights for us.”