It has finally happened.

It has finally happened.

Football has overtaken netball as the number one sport for young Australian girls in the important 6 - 13 age group. 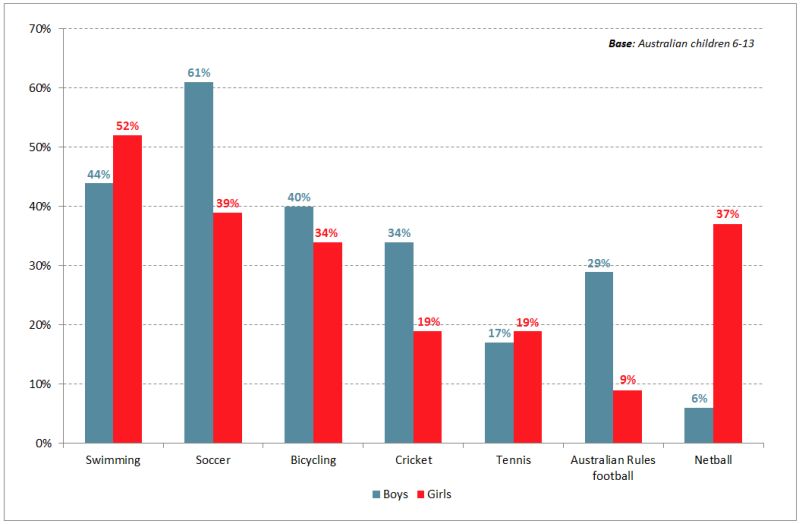 It is an important milestone for the women's game in Australia as it looks to build a strong participation base.

Reasons for increase in participation

The popularity of girls football hasn't come from nowhere.

It has been building for the past decade and many reasons could be cited.

For the first time the Matildas pierced the public consciousness and their successes at the 2010 and 2014 AFC Women's Asian Cup, strong showings at the 2011 & 2015 FIFA Women's World Cup have continued to raise the profile of women's football and create visible role models.

The last decade has also seen the creation of the W-League with a national broadcasting deal - ABC (first 7 seasons) and Fox Sports and ABC for Season 8 - for each of the eight seasons.

A further breakdown of the participation rates has highlighted the popularity of football in the 10-13 age group, that period when children usually become more vocal about which activities they want to participate in. 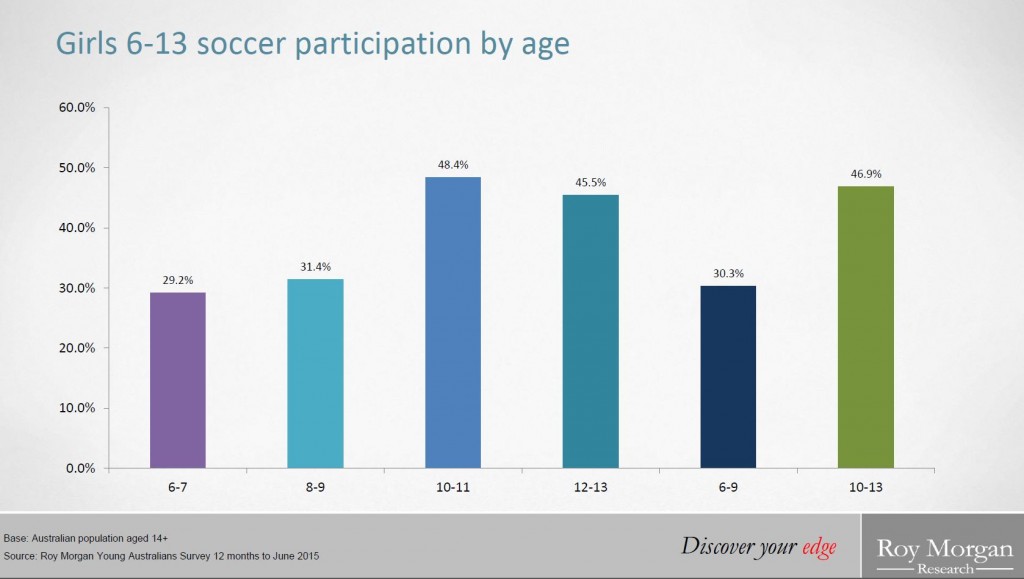 This could be attributed to the work done and programs implemented by state federations and clubs to recruit young girls early, at club level or at school.

Further, better engagement with migrant communities by the FFA and organisations like Football United, have seen an increased uptake of football from migrant backgrounds.

Australia's migrant population has long been a source of football participants on the men's side of the game.

However, on the women's side it was a largely anglo-saxon base. That is slowly changing and more girls of Asian, Middle Eastern and African heritage are participating. 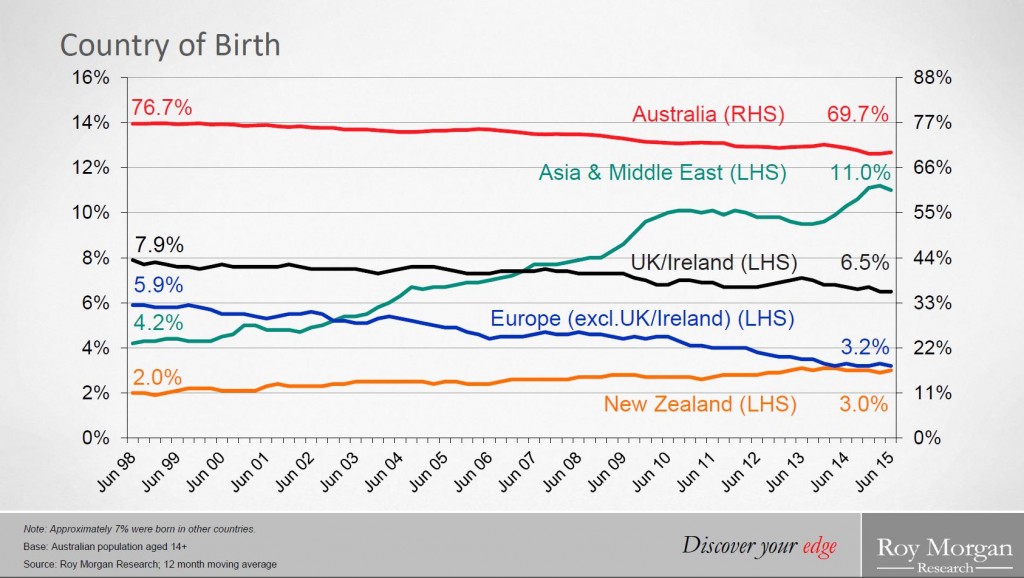 While the RMR findings are a cause for celebration, now comes arguably the more difficult part; remaining on top.

Challenges to staying on top

Football may have currently overtaken netball in the 6-13 age group, but the 39% to 37% difference is a small one.

What the figures also indicate is that many girls are playing both sports at that age group and at the next age group - 14+ age group - is where there will be a fierce battle to retain players.

Several studies [1] have highlighted that by 14 years of age, girls drop out of sports as much six times the rate of boys with the trend continuing into adulthood.

Findings provided by RMR demonstrate that the drop out rates in football are not dissimilar. 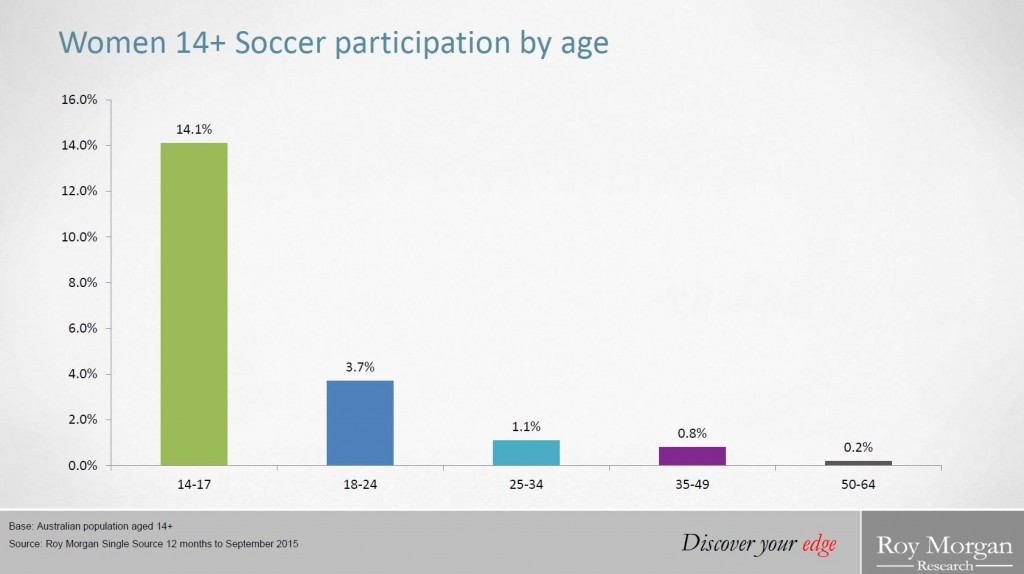 Some of the challenges to staying on top are complex and system wide with external factors impacting them. Others are within the sports' control.

Continuous (and increased) visibility of elite female footballers (Matildas and W-League) is paramount.

While correlation is not causation, it is significant that many of the big spikes in participation have occurred around World Cup periods, when the national team is most visible. 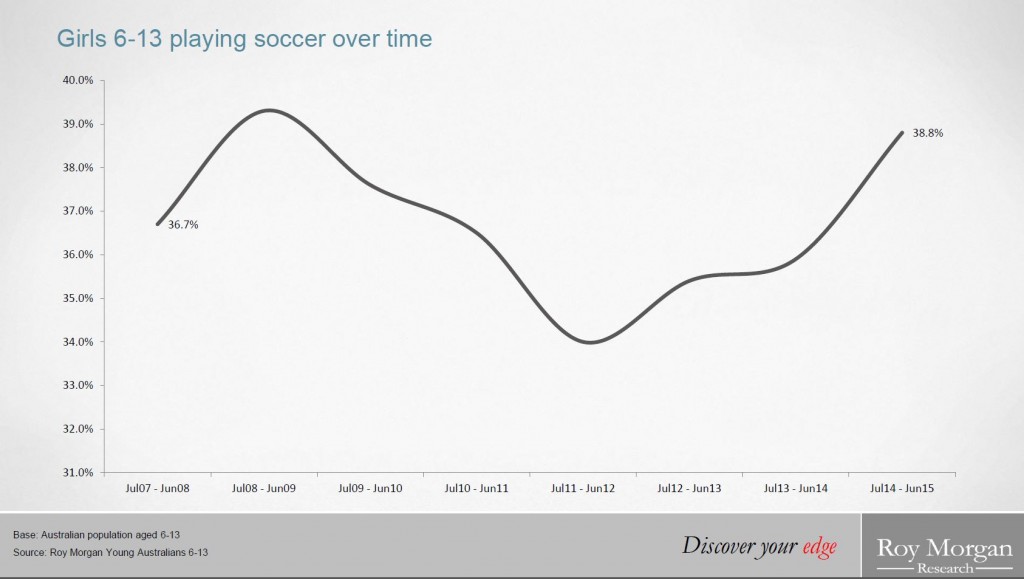 SBS's coverage for the 2015 FIFA Women's World Cup was another significant moment with the network providing substantial resources to the broadcasting of the tournament.

The result was win/win for the station - winning "Best coverage of women in sport" at the 2015 Sports Media Awards - and for women's football.

In fact, RMR found there was a "World Cup bump" in the number of women (all age groups) who participate in football "occasionally" [2]. 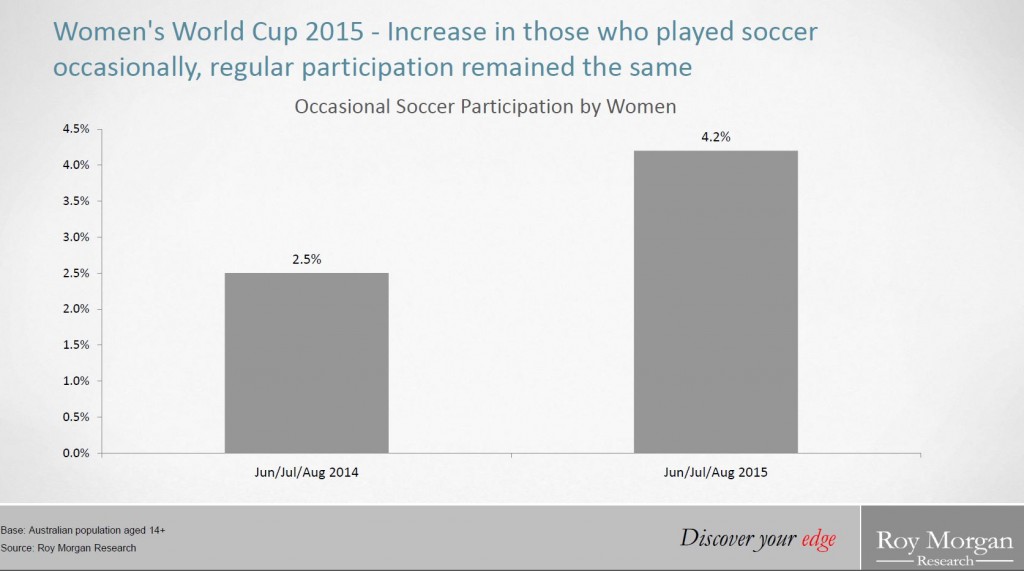 This season the W-League has seen excellent coverage (with strong viewing figures) of the Match of the Round by Fox Sports (simulcast on ABC TV) with a strong female-centric broadcast team.

With increased visibility over the last decade, women's football has become normalised.

For this to continue, the media and marketing of the women's game needs to continue to be driven by the national and state bodies to make it attractive and viable for media organisations.

Providing opportunities and pathways for young girls to find success is also key.

At the top end, the brutal truth whispered but rarely spoken aloud is that the elite pathway has been slowly eroding since its initial implementation.

Institute programs have fallen by the wayside, National Training Centre programs have also come under criticism and talent identification is considered to be more haphazard.

One source bemoaned the fact that there were more resources in the previous institute programs in comparison to the state based NTCs resulting in gaps at various age groups for such programs as the skill acquisition programs. 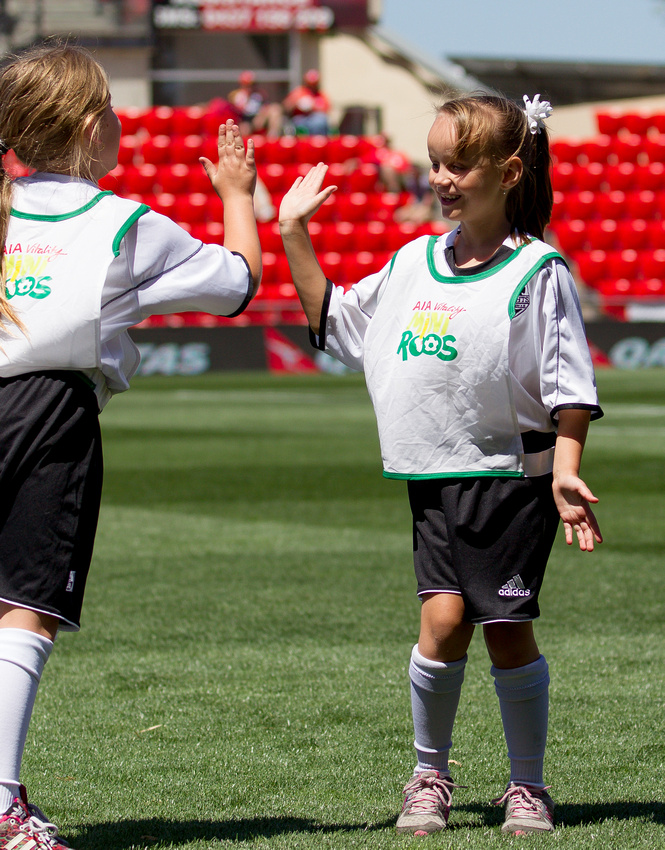 There has also been criticism from several high performance coaches that we have stopped creating environments where the best young players are being challenged by older, experienced players.

It is one of the core issues regarding Football Queensland's decision to make the NPL an under 20 competition.

"By taking away the premier league we are taking away opportunities for young girls to play with and against experienced players and learn from the best in Queensland. How are players meant to develop when they are constantly playing against people the same age?"

Then there is opportunities for rural players beyond the club system.

Other sports have managed to successfully mine and develop the talent away from the major cities. Football used to have this ability but again many feel like that the lack of opportunities for girls in country regions necessitate relocation to major cities.

There are many more issues that can be raised and really a whole series can be written about high performance and the elite pathway.

It will never be perfect but designing and executing programs that feed into a successful national team is important to the overall health of the women's game.

And it is not just about young girls on the elite pathway. As the graph above shows the retention rate continues to drop even further after the age of 17.

Once girls fall out of the pathway what happens to them?

Ideally, clubs should be offering three tiers of football; community football, National Premier League and high performance. It would provide female players with the opportunity to move between the three as they move through their careers.

And what about resources for women who are taking up the game late in life? Then there is the issue of access to grounds and resources (an issue facing football as a whole). Stepping through these issues and formulating sustainable solutions will be vital over the coming years.

Then there is the question of fees.

Economic factors are always a barrier to entry and football is in danger of pricing itself out of the reach of the very group partly responsible for the increase in girls participation - migrants and the middle class.

In undertaking the below research, football and netball clubs from the same association were selected (although finding information was more difficult in this way), their names have been removed (it is a sportwide issue so shaming serves no real purpose) and clubs were chosen where the fees were the base cost (ie uniforms were a separate fee).

The Leopold Method in a must read article in 2013 outlined some of the reasons for the pricing in football including the 3 tier levy system - national, state and association.

Costs of participation increase again once a player is in the elite pathway [3] and it is a situation that could endanger the retention rates of future players. NSW is taken as the example for comparison.

Again these are a sport-wide issue but one that could potentially negatively impact on future participation rates.

All in all women's football is in the healthiest state it has ever been but that is not to say that there aren't issues and improvements that are needed.

As the saying goes "If you are standing still, you are also going backwards. It takes great effort to maintain forward movement."