The Giants are ready to open their 2019 Suncorp Super Netball campaign against the NSW Swifts.

After finishing as minor premiers last season and making the finals series for the second consecutive year, their first-round match in 2019 is against cross-town rivals, the Swifts.

The Giants boast a relatively new-look side with  Caitlin Bassett, Matilda McDonell, Amy Parmenter and Teigan O’Shannassy all joining the line-up.

Alongside Sunshine Coast lightning, the Giants have been one of the most consistent sides in the competition. 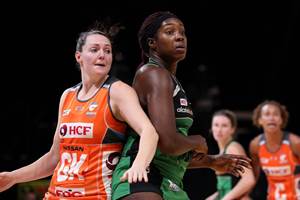 Super Netball teams to step it up again

As the 2019 Suncorp Super Netball season approaches, Giants Netball goal keeper Sam Poolman expects the competition to go up another level this year.

This season they are hoping the 10 player roster will bring their own unique skills to the group.

The NSW Derby is one that is characterised by passion and determination and has quickly become a not-to-be-missed encounter with a fierce on court rivalry.

Both teams will be playing for state pride and to claim the Carole Sykes Memorial Trophy.

“Starting with The Derby is such an awesome way to start the season and find out exactly where we sit," Giants coach Julie Fitzgerald said.

“The Swifts are a really good side and you can tell that they've been together for a long time, their combinations are working well, their understanding is working really well and I think they've grown considerably from last season, so we know we're in for a really tough battle."

The Giants go into the match with the upper hand, having won three of their four encounters with the Swifts and will be hoping to continue that.

Unfortunately for the Swifts, they were dealt a double injury blow with English wing attack Natalie Haythornthwaite and young goal defence Kate Eddy both ruled out.

Haythornthwaite has a hamstring injury which happened during a pre-season win over the Giants while Eddy is nursing a groin strain.

Training partners Sophie Halpin and Tayla Fraser were called into the squad as temporary replacements for this Sunday’s NSW derby.

“It’s never ideal to lose two of your main roster for the opening game of the season but that’s the nature of professional sport,” Swifts coach Briony Akle said.

“We are still working with our medical staff to see how long Nat will be sidelined for, but she’s in great hands and we’ll have a better idea of her return soon.

“With Kate it’s about not risking a key player very early in the season. She probably could play this week, but it’s a risk, and you don’t want to aggravate something in Round 1.”

The Swifts and Giants match will be broadcast live on Channel Nine tomorrow (April 28) at 1pm.