The 2018 Rugby Sevens World Cup follows a see-sawing World Series but kicks off with the usual favourites and rising stars.

While the Australians opened the 2017/18 series undefeated and eventually finished as Series Champions, they lacked consistency in later rounds as they finished third and second in the final three legs.

New Zealand had a slow start to their season, struggling with injuries early on, but dominated the latter stages after winning the Commonwealth Games in April and beat Australia twice in final games including a 46-0 in Langford, Canada.

They will arrive in San Francisco heavy favourites as they look to defend their title, with four players in the side who were there when New Zealand last won the World Cup in 2013. France was the most consistently improved side in the 2017/2018 Series and will be one to watch in the lower half of the draw.

The USA and Russia both started the World Series well, but trailed off, as did Canada who faced injury challenges. The World Cup will be a fascinating test of how quickly these squads can turn that disappointment around.

Australia finished the Series well, disrupted at times by a few injuries to significant players from the Commonwealth Games. They’ve shown both resilience and that they’re not impenetrable in the last six months.

Dominique Du Toit a notable omission in the side, after she picked up a collarbone injury in Paris. Du Toit had a wonderful World Series, and she’ll hopefully be back in time for some Uni 7s action later this year.

The trio of Ellia Green, Alicia Quirk and Sharni Williams return for Australia in San Francisco, and it will be interesting to see if they’ve all hit the right balance of preparation and contact for what will be a very quick World Cup Tournament.

While all the Series tournaments involve a pool round, the World Cup is direct knockout, meaning the champions will only need to win four matches and play less than an hour of rugby. That also means there is very little time for errors or complacency.

Some great first matches await, with England and Ireland likely to be a close one, while Fiji take on Spain, which will no doubt also be well contested. 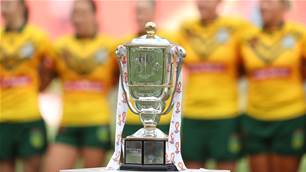 Get set for the biggest and best World Masters Games ever

Be a winner at the World Masters Games!