After an hour and 52 minutes the race came down to a 200m sprint between Gentle and Vicky Holland, who was trying to win her first overall WTS.

Gentle looked over her shoulder no less than four times in the straight and the 27-year-old crossed the line on the Gold Coast as ACDC's "Thunderstruck" rang out on the loud speakers.

There is so much work that goes into days like yesterday. Thanks to my coach Jamie Turner and @triaustralia for supporting me through the ups and downs of 2018. It means the world to finish the WTS season this way. After Montreal, I still had to hold onto the belief that something special could still happen yesterday. @emmajeffcoat was an amazing ally on the bike, I’m so grateful to have had a friend out there 💪🏼 Thanks to my friends, family, supporters and @josh_amberger for lifting me on that blue carpet to take the tape 😊 and of course, congratulations to the overall series podium @vixholland @kzaferes6 @georgiatb 📸- @worldtriathlon media

“It is, without doubt, the best performance of my career and I still can’t believe I actually outsprinted Vicky Holland, it is something I will remember for a long time,” Gentle told Triathlon Australia.

“And while I did suffer a painful blister which left my foot bloodied it actually distracted me from the pain in the rest of my body and something you can overcome with a potential Grand Final victory,” she said.

Gentle, unlike other races this season, had put herself in the race from the first moment and despite the difficult conditions including a big well in the Broadwater and overall windy day, she managed to push through. 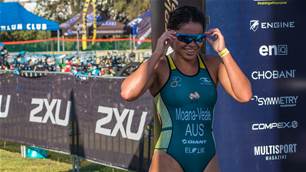 Moana-Veale to give her all to make Tokyo 2020