The Australian Gems have arrived in Bengaluru, India in their quest to qualify for the Under-19 World Cup next year.

Traversing the new qualification system now through Asia, the Gems will need to advance to the Semi-Finals of the FIBA Under-18 Asian Championships to book their place in next year's World Cup while they will also be aiming to replicate the Emus performance from August and claim the gold medal.

The team, led by coach Dee Butler, was selected two months ago and includes five players (Isobel Anstey, Agnes Emma-Nnopu, Isabel Palmer, Ashlee Hannan and Lily Scanlon) who won bronze with the Australian Sapphires at this year’s Under-17 World Cup.

In addition, Miela Goodchild, Jazmin Shelley and Samantha Simons will bring experience from their Under-17 World Cup gold-medal winning performance two years ago while Shelley and Simons competed for the Gems at the Under-19 World Cup in Russia last year.

Miela’s been hooping in India with @BasketballAus at #FIBAU18Asia. Wishing her continued good luck and can’t wait until she’s back with the squad in Durham!

Australia will take on Indonesia, Chinese Taipei and Korea in the group stage and if they finish on top after those three games, they will automatically book their spot in the Under-19 World Cup by advancing directly to the Semi-Finals.

Finishing second or third in the group means they will still have a chance to earn their place via a Semi-Final qualifier.

All games for the tournament will be live-streamed on the Basketball Australia Facebook page or via FIBA's YouTube channel.

The 2018 Australian Gems Schedule for the FIBA Under-18 Asian Championships (all times AEDT):

The Australian Gems Team for the 2018 FIBA Under-18 Asian Championships: 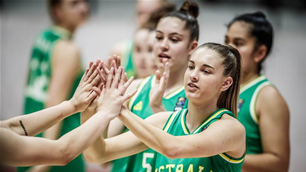