After three AFLW seasons including two Grand Final appearances, the Brisbane Lions will finally play of the Gabba.

Brisbane will host rivals Gold Coast in the third and final Winter Series match on Saturday at 2pm.

"It's big for our group who have trained downstairs for three or four years and now they get a chance to run around on this ground and play on the hallowed turf," Lions coach Craig Starcevich told media.

With the AFLW season being played in the summer, clashing with BBL and WBBL, the Lions have had to play their matches on the north side of Brisbane.

Sometimes up to 45 minutes away.

Fans thought Brisbane would get the chance to play at the Gabba against Adelaide for the 2017 Grand Final but a booking mishap saw them shifted to the Gold Coast's Metricon Stadium.

"This is a dream come true for a lot of girls," Lions captain Sharni Webb said.

"It's something we've wanted since year one and now we get a chance to play at our spiritual home deck."

Brisbane has won both winter matches against the Suns, who enter the AFLW in 2020. 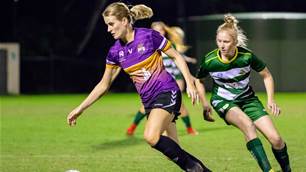