It's no longer a secret that Sabrina Frederick has joined the Richmond Tigers for the next two seasons.

The forward/ruck left the Brisbane Lions nearly a month ago with The Age linking the star to Richmond early on.

It's a significant coup for the Tigers who traded their first-round selection in this year’s AFLW National Draft (pick no. 12 overall) to the Lions in exchange for Frederick.

The 22-year-old has played in every single Lions game including two grand finals and is a two-time All-Australian and former AFLW Rising Star nominee.

Richmond Head of Women’s Football, Kate Sheahan, said the club could not have been more impressed with Frederick.

“Sabrina is a terrific player and person who we feel will fit seamlessly into our football program,” she said.

“The sky is the limit with “Sabs”, and we are ecstatic that she will be wearing the Yellow and Black.”

The 18-year-old lives on the Gold Coast and came through the Suns Academy in Mackay.

In positive news for beleaguered Brisbane supporters, Sophie Conway has signed for the next two seasons. After missing the 2019 season with an ACL injury, the 20-year-old will repay the faith to her club.

The AFLW Trade and Sign period will end on April 18. 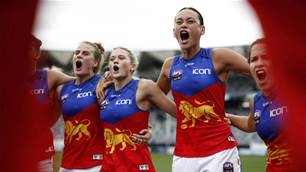